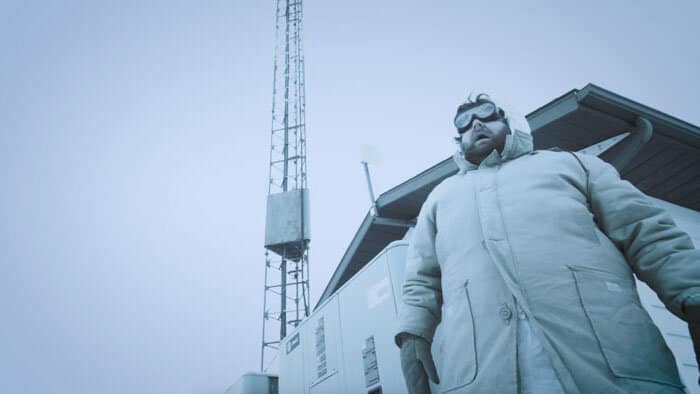 To put it bluntly, this short film looks like it might be one of those that people will be stating is one of the more brilliant pieces of the time since it plays upon the idea of the pandemic, but from a certain perspective, it looks a bit ridiculous. It’s all in the point of view that each person will be used to watch this short film, but Hell in a Handbasket is about as overused as the idea of fashioning something after the pandemic at this point. There’s no doubt that there are plenty of movies and shows that might be able to do it right and really capture the attention, but giving the film a chance is wise to be fair since all we’ve seen of it thus far in the trailer is enough to realize that Dale is probably the last person that a lot of folks would want to put in charge of making humanity’s last stand. On one hand, the guy does have to be fairly intelligent, at least one would hope, to be left alone in an Arctic observation post, or whatever this setting is, on the other, it’s likely that his role is that of an assistant or someone that might be intelligent but not all that capable on his own. It kind of feels as though anyone stationed in such an inhospitable area might need to possess a few survival skills and be able to figure out a number of ways to keep their mind occupied to keep them from cracking up without anyone to speak to. We do get to see that he has contact with the rest of the world via his phone, but as the trailer would indicate things start happening and the connection either starts to fade or something within the station makes it nearly impossible for him to keep it together. Whatever is bound to happen, Hell in a Handbasket is at least an accurate title, no matter how overused it is.

Thinking about the isolation and loneliness that would set in eventually, if not immediately, when being stationed in the Arctic is tough for a lot of people to even think about since many people are a little too social to even think about having no contact with anyone for a long period of time. One would think that a person might need to train themselves for such a position since while it might be that a person would be stationed with several others, it’s also fair to state that without any other faces for the duration of their stay it’s very possible that a person would crack up. Tack onto that the idea that a person has been told of a pandemic that is affecting the entire human population and it feels likely that many people would start cracking up in a very serious manner. Isolation does different things to a lot of people since the idea of not being around anyone for a matter of days might sit just fine with a lot of people, while not seeing anyone else, or at least not that many people, for even longer might not be as bad. But being told that there’s a pandemic and that the human race is now in peril, and being given the feeling that you’re the last hope for humanity, that would weigh quite heavily on any mind, and would probably break some folks.

Even thinking about it is enough to send a shudder down the spine since when imagining the bleak, empty landscape all around and the idea that there’s no one else there, some people might actually start to break down just thinking of it. There’s no way to tell just how bad it would get without being there, but the imagination of many people is probably good enough to fill in the gaps and make it even worse since thinking of the crushing grip of loneliness is something that can drive some people as close to insanity as they’ve ever been. The movie is supposed to be a comedy as well, but the trailer kind of paints it as a thriller, though perhaps when we watch it finally we’ll get the joke. It wouldn’t be the first project to poke fun at the pandemic and it won’t be the last, which is a plus since it means that people haven’t completely forgotten their sense of humor, and might remember that laughing at something, without meaning to offend, is capable of taking the sting and some of the power from the tragedy that the idea is about. People are still reeling from the pandemic and some might not recover for a while, but a movie that uses the event as a way to entertain and to remind us that we’re still here and still moving forward isn’t such a bad idea.