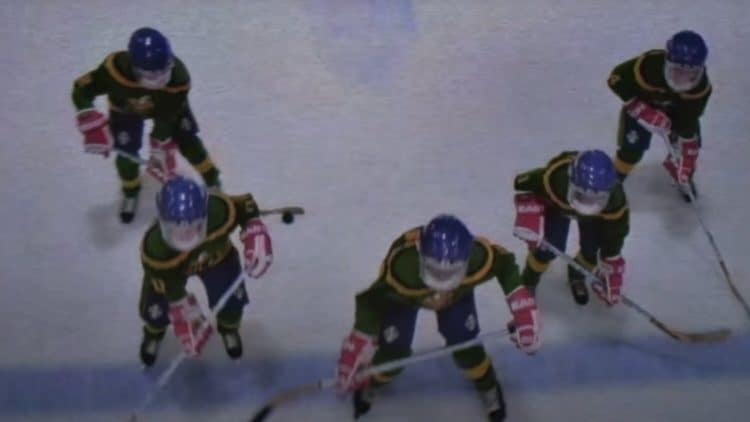 The Legend of the Flying V is actually a lot of fun to watch but from a structural standpoint, someone that might not fully understand hockey might think that one weak link in the formation could spell doom for the entire thing. Apparently though the Montreal Canadiens used a version of The Flying V and it worked after the third attempt, so it could be a pretty sound technique in all honesty, so long as it was practiced and given a few adjustments perhaps. It does feel like something that wouldn’t be used extensively unless a team could somehow pull it off that well since the idea of it is sound, but the application is something that could be overdone. In that case, it would no doubt be scouted and a weakness would be found and exploited by various teams. This has happened in other sports since like it or not, going back to the well for something too often can give other teams all the chance they need to come up with a reliable counter that can turn something great into a liability since the other team will have found a way to get around it. All one has to do is look at The Mighty Ducks 2 and realize that the Iceland team did in fact find a weakness in the technique, a weakness they exploited since not only were they bigger than their opponents, they were far more aggressive. To be fair, the Flying V didn’t really work in the third movie either since it had been well-scouted and nobody was falling for it anymore.

When done in a useful manner and brought out without the opposing team expecting it though, the Flying V is in fact kind of a cool technique to watch since it takes a lot of teamwork and dedication to pull this off, and it takes a lot of trust in your teammates as well. The Mighty Ducks is a movie that a lot of us looked at as kids and perhaps thought was fun and engaging, but it did teach a lot of important life lessons that thankfully weren’t buried by the hilarity and lack of reality in the movie. Don’t get me wrong, not everything was exaggerated and there were moments that hockey fans likely appreciated, but considering that it was a Disney movie and that it was a group of kids playing the game, the stakes weren’t quite as high as people want to think. Obviously they were for the sake of the movie, and when we were kids everything was of great importance, but now that The Mighty Ducks: Game Changers has come along it does feel that kids had an easier time of it back in the day. You won some, you lost some, but you played for pride and for the love of the game more than anything. Winning was of course the main goal and it’s always been the drive for many people, but when the Mighty Ducks first started out, they were a bunch of reject players that could barely skate and enjoyed hanging out with each other more than anything.

Now, the Mighty Ducks are the elite team that has kind of taken the place of the Hawks from the 90s since they’re a tightly-knit team that will shun anyone that isn’t a part of their group, including one of their own after he’s been cut from the team. The Ducks from back in the day weren’t perfect by any means since they let Adam Banks have it when he had to switch teams. But after a while, he proved his worth and he proved that all he cared about was playing hockey, thereby making him a Duck by more than just association. One has to wonder if the same thing is going to happen this time around since one of the Ducks almost looked like she was ready to join Evan’s new team, but might have been afraid of disappointing her parents more than anything. As an underdog team, the Ducks shocked everyone when they started getting better, but they went on to become THE team to beat at some point, and unfortunately, Gordon Bombay was no longer there to share in it. The series that’s out now is kind of a triumphant but still saddening commentary on the Ducks and how their organization has been built up and torn down at the same time.

They’re now the best team in the league, but their heart has gone as cold as the ice they skate on since it’s all about winning once again, and not enough about the heart it takes to play the game. The fact that Evan created his own team, with help, and is trying to bring back the Flying V is pretty cool, but really, it’s another uphill battle, and the Ducks might have to take the fall this time.