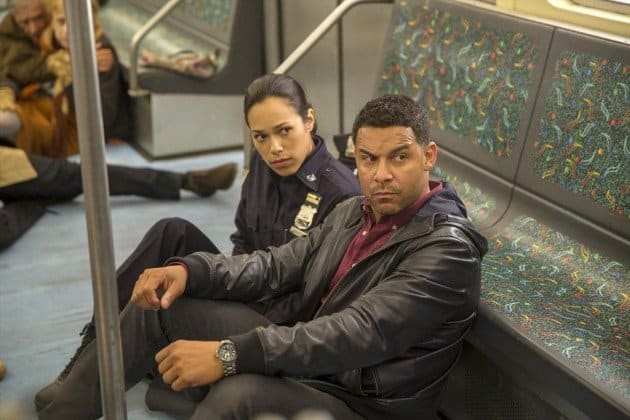 In this Esposito-centric episode, we get a lot more of the recurring female characters, as well as a bit of a health scare reminiscent of recent events.

We start with our newlyweds arriving to their first crime scene since the honeymoon. “You still remind me a little of Hooch” was a great callback not only to season 2, but also to the former Opening Narration (it’s been a while, so if you forgot, it began: “There are two kinds of folk who sit around and think about how to kill people – psychopaths and mystery writers. I’m the kind that pays better”). Our victim, Paul, was found on a park bench with a shot to the head. Castle and Beckett speak to his brother, who says Paul worked a lot at a government job, where he’d recently gotten a disturbing call with a scheduled meet-up that very morning. His boss at GAO, a fix-it agency for places with government contracts, claims not to know about it.

“I feel the heavy hand of conspiracy.”

Ryan tracks the phone call and finds Jared Stone (who looks a bit like Tom Mison from Sleepy Hollow), an Occupy Wall Street hacker. Castle theorizes that Jared is a whistleblower who called on Paul to uncover some scandal. Castle’s theory makes sense, but is “conveniently unburdened by evidence.” Ryan and Esposito go looking for Jared, and have a bro-to-bro talk about marriage and family. Espo’s biological clock seems to be ticking, he’s ready for kids, but Lanie isn’t ready for that yet (uhm, has he spoken to her about it? Perhaps she’s playing cool because she thinks he’s not ready. Also, remember that Lanie was pregnant with another guy’s baby in Castle’s flash…sideways a couple episodes ago). Espo and Ryan see Jared duck into the subway, where Espo follows him. Ryan calls him as Espo ventures further into the station, getting on when Jared does. (I bet people think it’s unrealistic for there to be service underground, and even a year ago, they’d have been right, but recently subway stations have had better and better cell service.)

In the subway car, upon Esposito’s approach, Jared pulls the gun of a nearby uniformed officer (writing up a potential graffiti-er) and holds the car hostage. The train breaks to a halt and Jared, huffing more and more asthma medication from a pump, realizes that Espo’s on the phone with Ryan (now that they’re in the tunnel, that cell service should be a bit spottier ;-)) I loved the look Espo shared with the uniform, Marissa Aragon, as the salesman tried to reason with Jared to “get [him] what he wants.” Gates informs the squad of the hostage situation and Kate is immediately in Mama Bear mode. She calms down Ryan as he laments not going into the subway with him and immediately gets into action. Hostage Rescue gets to the scene, just as Beckett sends Ryan to Jared’s house to get more information on him. Lanie arrives worried and they all head into Tori’s tech room, where they’ve found an experimental live feed of the train car. Espo tries to reason with the guy, but Jared is armed with explosives!

The team watching from the tech room note that this must have been a planned attack–he was heading for a wealth management seminar when he boarded the subway. Jared doesn’t want to hurt those people, but he will if it comes to it. Castle, reading Jared’s posts, doesn’t see him as a man of action, so what caused him to “become radicalized?” Hostage Rescue calls for Espo’s favorite pizza, Kate knows it after all these years working together: Pineapple, olives, and double jalapeÃ±os (yeesh!).

Jared wants to know how Espo found him? “The White Knights?” Before he could tell Espo what that was, the HRT calls and delivers the pizzas, in return Jared also asks for Erin Wilson’s release from prison. Erin, his hacker girlfriend who got arrested for a crime he was an accomplice to, claims not to know about this. Jared gets upset when HRT won’t send her to the Maldives, he gets antsier and antsier, pumping more and more asthma.

Meanwhile, Ryan’s been to Jared’s apartment, finding shredded documents, that say: “Read, memorize and then destroy,” implying that Jared was working with other people. Potentially the White Knights, the name of the online directory Jared was a part of. The pizza arrives for the hostages, Espo’s tricky order contains a hidden note from HRT, warning him of a breach. Jared senses the breach coming and realizes that HRT must have eyes on the subway car. He knocks out the hidden video camera.

With no video to watch, Castle and Beckett go back to looking into the victim and his connection to Jared. They see that  Ryan brings the news that Jared is following a script, one which stalls for time. Espo and Marissa manage to get Jared down, no explosion! But Ryan calls with grave news: Jared’s asthma is in fact a deadly H5N1 strain, an airborne virus that everyone in the car came in contact with. Thankfully there’s a vaccine, but his stalling was all a plan to get the people at his original destination infected with the virus, leading to an epidemic. One can’t help but think of the recent Ebola scare (and thinking how this episode might have played a mere couple of weeks ago), even though the episode was likely written before the first Ebola patient arrived in America (or perhaps right around then…).

All in all, Paul, investigating the lab where the flu strain was stolen, found out Jared stole it, so Jared lured him in the park and killed him. Jared thought he was doing it all for Erin, but he realizes that he was set up: the plan to go to the seminar was White Knight’s idea, as was the meeting with Paul. Jared was infected through that darn asthma pump. So who was Jared working for? None other than Paul’s boss at GAO. The pharmaceutical company that made the H5N1 flu vaccine was intending to spread the virus to keep up with all the orders of the vaccine they had. Castle and Beckett realized that Paul’s boss converted all her stock to the pharma company… she knew there’d be an influx of business.

All the hostages are released with clean bills of health. Marissa and Esposito flirt a little more, but she has a kid and doesn’t seem interested in dating. She also notes that in the heat of the moment, Esposito was mouthing Lanie’s name, “who you think of in that moment, it has weight. Don’t trade what’s real for something that isn’t.” After hugs back at the precinct, Castle goes full steam ahead (a bit of a 19th Century train pun? I tried.) with a slew of train related puns, all deemed “too soon.”

This episode was a great return to a standard episode, an episode that could be placed in any season. Though it was Espostio-centric, we also got to see a lot more Gates and Lanie (who we got to see in more than one scene over a dead body), more Tori–who some fans suspect could have had a thing with Espo had he not been so hung up over Lanie) and even Marissa, a new cop. It was a great episode to shine some light on lesser seen characters, while remaining true to the Castle formula. The mythology episodes and the romantic episodes are great, but it’s also nice when we can return to a typical case of the week and not slow things down.

– Tori and Lanie actually get a scene together!

-Espo’s moves with the shoelaces! How Macguyver of him.

– Why didn’t Ryan and the CSU team who looked through Jared’s apartment not have to get treated for H5N1 too? Since they found the strain there.

– It’s really nice to see Beckett working with that beautifully simple band on her finger. They’re married, y’all! Still not over it.

– Will we see Officer Marissa Aragon again? Maybe Espo will bond with her son, since he’s wishing for kids now…

– The Old Haunt reference! “We’ll take the subway. Too soon?”

In this Esposito-centric episode, we get a lot more of the recurring female characters, as well as a bit of a health scare reminiscent of recent events.