Home
Television
Castle
Castle 6.17 Review: “In the Belly of the Beast” 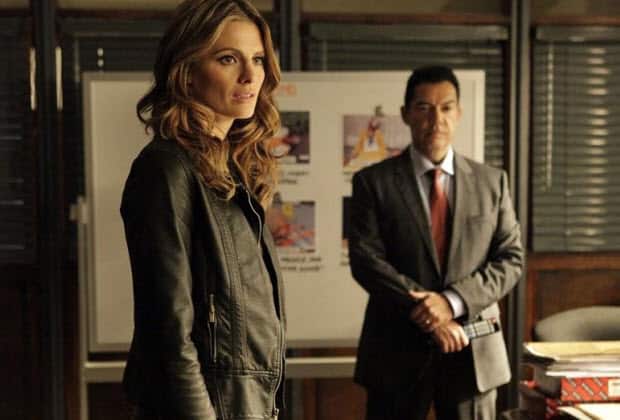 This week’s episode of Castle takes the spot of our usual two-parter (which we got at the premiere) and becomes arc-heavy about ¾ of the way through, reintroducing a villainous character from three seasons ago and upping the stakes of Beckett’s mother’s case.

Castle and Beckett start mid-day, feeling relaxed and a bit naughty. Wedding talk leads to needing a “really good f…ont” and our duo runs off to the bedroom only to be interrupted by a mysterious call from Captain Gates. Beckett heads in to discover that a girl named Elena Marcov has been talking to Captain Fowler, turning over information on a new drug ring. But Elena tried to commit suicide and they need someone who looks like her and speaks Russian and can attend a meeting at 5pm. Beckett fits the bill and agrees, thinking she’ll be back for dinner with Castle in just a few hours. She heads off to the meet but is snatched from the hotel right under the nose of the cops!

Beckett is taken to a secret location–tested very creepily for a wire by Mr. Harden– and taken to meet Mr. Jones. They test her story–she resurrects her Russian and Jones believes her, but Harden is still skeptical. They want Elena to become a permanent part of their team–but Beckett doesn’t understand what part Elena has been playing. Lazarus could explain, but they might not let her meet him. They make Beckett wait it out. While she waits, she writes a letter to Castle.

Dear Rick, I don’t know how much time I have, even to write this letter. What I do know now, is that I’m in this and the only way I’m gonna make it out alive is to see this through. […] Babe, it’s your letter and I hope you never have to read this and I can tell you all of these things in person. But if something happens and I don’t make it, I need you to know that our partnership, our relationship is the greatest thing that has ever happened to me. You’re an amazing man and I love you with all of my heart. Always.

When we get scenes like this, it makes me fear that something will interrupt their wedding scene–other shows have characters express their feelings before wedding scenes in order to interrupt or alternate a traditional wedding scene. But so far, Castle has been giving us what we want. Even this episode features some fan favorite ideas: the return of Beckett’s Russians and Assassin!Beckett, because that’s what she figures out Elena is.

Harden and Jones take Beckett to a house and order her to kill the man inside. Kate’s quick on her feet teaches the man to keep his head down while she orchestrates a quick murder scene (the clue to the audience before the reveal was that Kate went inside, but there were bullet holes in the window…). Beckett’s proven herself, so she gets to meet Lazarus. Down in the basement, with girls counting hundreds of thousands of dollars, Kate walks through to meet Lazarus, who is an old face: Vulcan Simmons from season three. Beckett had slammed the large drug dealer into the interrogation window when he continuously baited her about her mother. He hasn’t changed a bit, he recognizes her immediately. He wants to know what she knows, but Beckett doesn’t give in, even when Vulcan decides to water board her for all of Act 5. Vulcan gets tired of Beckett’s refusal and orders Harden to dispose of her.

Harden takes Kate into the woods and nearly kills her, but Elena, who’d escaped police custody, arrives and saves Beckett. Why did she do it? Lazarus owes her… As Kate recovers back at the precinct, the signs all point to Lazarus not being Vulcan Simmons, but to someone who: owed Beckett’s a save, has major political, and connections to Vulcan Simmons. It’s takes Beckett longer than I thought it should for her to realize it’s Senator Bracken. Bracken, making a brief appearance, is amassing funds to run for president! In the end, Beckett proves her character development by choosing to go to bed with Castle rather than dwell on Bracken’s bid for the White House, but we know it’s going to recur as the season winds down. I’m definitely anticipating a Bracken-Beckett showdown at the same time as and perhaps even interrupting the wedding.

We haven’t any  Johanna Beckett episodes this season, because we also have some other nice arcs now, so it’s nice to see it return. I almost wish this had been a two-part episode, so we could have seen more Assassin!Beckett and more of Castle’s worry (and more for him to do throughout the episode but fret), but we can’t be greedy with two-parters I guess. And I think while there are things I wanted more of, extending it to a two-parter might have stretched it out too far, this episode as is was just enough to make us want more. We’re winding down to the season finale, guys! Can’t wait to see what they have in store!