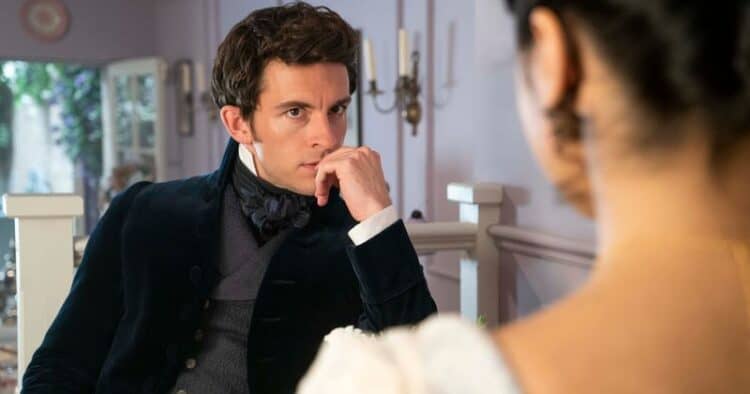 Bridgerton Season 2, Episode 2, saw the return of Collin Bridgerton. Will the second eldest Bridgerton open his eyes one day and see the gem that is Penelope before him? Hopefully. Meanwhile, Anthony Bridgerton made his intentions of courting the beautiful Edwina clear despite Kate’s determination to keep him far away from her sister.

Bridgerton Season 2, Episode 3 begins with an emotionally wrenching flashback ten years into the past. What started as a sweet father and son hunting trip with Anthony and his father Edmund quickly turned into the Bridgerton family’s worst nightmare when Edmund is stung by a bee. Edmund dies in his son’s arms and Anthony’s mother who by the way is pregnant at the time witnesses her husband’s traumatic death. Anthony was thrust into the role of  Viscount at a fairly young age. As a result, he had to make difficult decisions that a child shouldn’t have to make including making his own father’s funeral arrangements. Anthony couldn’t bear to look at his younger siblings.

The ultimate test came during Lady Bridgeton’s difficult labor. The doctor wanted Anthony to make the decision of whether he should save the baby or his mother. No child should have to make that decision. Luckily, Anthony told the doctor to do whatever his mother decided. Edmund’s death was such a traumatic experience for Anthony that he vowed to never love. Lady Bridgerton’s distraughtness after the death of her husband taught him that love always ended in tragedy and he never wanted any woman to experience what his mother went through.

A Weekend At Aubrey Hall

Anthony invites the Sharma family to spend the weekend at Aubrey Hall. Such an invitation is a big deal and Lady Whistledown believes that Anthony will finally pop the big question over the weekend. Daphne is back in Mayfair for a visit with her new beautiful baby boy. Motherhood looks good on her. Anthony enlists the help of Daphne to help win over Edwina and her stubborn sister Kate. The Bridgertons have a weekend of fun planned for the Sharmas that starts with a game of Pall Mall. Kate quickly learns how to play the game and it isn’t long before the competitiveness between her and Anthony starts to take over. Everyone eventually abandons the game, leaving Kate and Anthony behind to battle it out.

Fate always has a way of bringing Kate and Anthony together.  They finally get a moment alone when they go fetch their balls which had rolled off into a secluded wooded area. When Kate gets stuck in a slop of mud while retrieving her ball, Anthony has no choice but to help and they both end up falling in the mud, laughing like two school-aged children. It feels good to see them interact without trying to rip each other’s throats off. Kate and Anthony can’t deny the chemistry between them. Neither could Daphne, who at one point mistakes Kate for Edwina. She can see clear as day that they would make a great couple. The real moment of bonding comes when Kate is stung by a bee. Anthony has a full-blown panic attack fearing that Kate will meet the same end as his father. Kate helps Anthony calm down by coaxing him to synchronize his breathing with hers. Anthony’s bare hand touches Kate’s bare chest and this time both of their breathing synchronizes for an entirely different reason.

Bridgerton’s drama doesn’t consume all of Episode 3. Portia Featherington is worried about Cousin Jack since he isn’t married. She fears that he’ll soon take a wife and throw her and her daughters onto the streets. So she quickly concocts a plan to ensure that Cousin Jack marries her eldest daughter Prudence. Together Lady Featherington and Penelope take a trip to the Modiste to find a dress for her hopefully soon-to-be-wed daughter. Lady Featherington convinces Prudence that marrying Cousin Jack is a good idea.  But things don’t work out exactly as they planned.