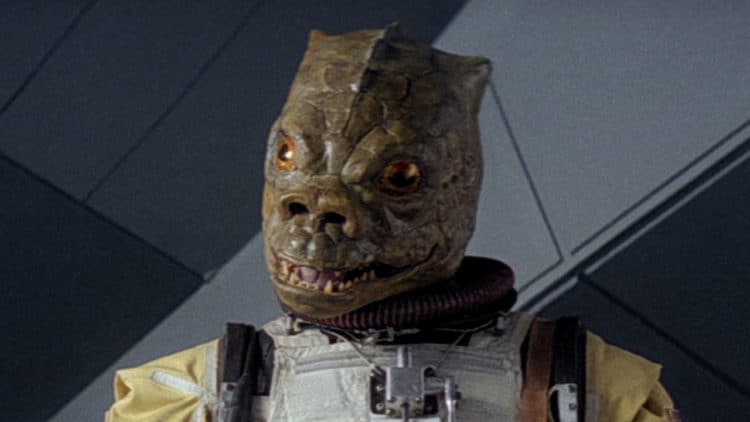 If you’re above the casual Star Wars fan, you’ll know the name Bossk. If it doesn’t ring a bell, go back and watch The Empire Strikes Back. Remember the scene where Darth Vader brought aboard a handful of bounty hunters? Of course, we all remember the elephant in the room, the very awesome Boba Fett. But if you remember the first bounty hunter we saw, he was a big lizard man wearing some kind of spacesuit. I remember seeing him for the first time and actually thought he was a scary. That’s probably why the Imperial officer was looking at him like he was about to get eaten. Well, he shouldn’t worry, because that lizard man was carrying a big rifle. He was one of the bounty hunters being recruited by Darth Vader to hunt down Han Solo. His name is Bossk’wassak’Cradossk or just Bossk.

So what is so cool about this lizard man creature? Well, for starters he just looks cool. In fact, he was one of my first Star Wars action figures that I ever owned. I don’t have him anymore, but I just couldn’t get over how awesome he looked. One can actually mistaken him to be in a sci-fi horror movie. The eyes, the teeth, the claws, and the fact that he’s carrying a big blaster rifle just adds on to the overall brutal nature of the character. If you want to see more of Bossk, go rewatch some episodes of the Clone Wars series and you’ll see him operate as the young Boba Fett’s accomplice. I just have to say, that’s precisely why Bossk returning to live-action form would be cool if he appears in the Book of Boba Fett. What else do we know about the show? Well, for starters, we know it premieres on Disney+ next month on the 29th. I’m very excited and I’m sure all the Star Wars fans agree with me when I say that it’s about time the legendary Boba Fett is getting some proper treatment. If you’ve seen the trailers for the show, it gives a lot of mafia movie vibes. It’s like the Sopranos or the Godfather in the Star Wars universe. That is just such an awesome concept and it’s the vibe I got while watching the trailers.

The trailers reveal that Boba Fett is intending on ruling the criminal underbelly of Tatooine. He plans on doing this by actually cooperating with the other crime lords, rather than ruling through fear. Surely, you can expect that there will be many naysayers out there who will challenge him. Some of those enemies will be the crime lords themselves, but he’ll probably face threats who are more on his level. By that, I do mean other bounty hunters. If it’s not going to be The Mandalorian, then it has to be a character from Boba’s past. One of the big names that comes to mind is his former Trandoshan partner and fellow bounty hunter Bossk. I just have to point out that this character is about as badass as he looks. Bossk comes from the lizard men race from the planet of Trandosha. He is the son of Cradossk, who was also a bounty hunter. What he specialized in the most was capturing Wookies. Just go back and rewatch the Clone Wars episodes where Ahsoka is captured by a group of Trandoshans and forced to participate in a hunting game. Think of them as the Predators from the movies embarking on wild hunts just for the sport. They are a truly violent race and Bossk is one of the most dangerous. Oh, and I should probably point out another one of the unwilling participants in the hunt was Chewbacca. Hey, Wookies make for a strong challenge.

In other episodes of the Clones Wars, you’ll see Bossk work alongside Boba Fett and even the familiar Aurra Sing, forming a small group of bounty hunters for hire. They’ve done several jobs together, and Bossk actually served as a bodyguard/mentor to the fledgeling Boba Fett. Even when they were incarcerated together on Coruscant, Bossk was quick to stand up for Boba when other inmates attempted to intimidate him. He was a valuable ally to the young Boba Fett, but eventually, they had to part ways and we all know where Boba ended up. And where Boba is right now, I can totally see him reuniting with his former companion. Would it be a pleasant one? I wouldn’t think so, considering Boba is on the path of being his own boss and running the criminal underworld. I can see one of those rival crime lords hiring Bossk to kill Boba Fett, and I think he would view it as a fun challenge. Don’t forget, he comes from a race of dedicated hunters who are similar to the Predators from the movies. They believe in loyalty and have their own code of honor, but above all else, they believe in being the superior hunter. This could lead to Bossk coming into conflict with Boba and lead to a very epic battle between them.

And I must say, the fact that this lizard man would be on screen and have a much improved appearance compared to the last time we saw him would be cool to see. This time, we’d be seeing Bossk do a lot more than just standing around and hissing at people. I want to see Bossk in action. He can use his fangs and claws, but he should also his big blaster rifle. That makes him a threat up close and at a distance. That sounds like a very serious challenge for Boba Fett, doesn’t it? For a character like Boba Fett, he needs a big challenge like that, so by all means, make him fight Bossk. What are your thoughts, Star Wars fans? If Bossk doesn’t appear in the Book of Boba Fett, then put him in the second season of the Bad Batch. It’s another animated appearance, so it does make sense. Still, I think we should see Bossk in live-action form at some point.