About three things I was absolutely certain. First, a boy like Edward would never be my soulmate. Second, if he was, there would be a part of me – which I assume would be wildly out of my control – that would want him dead. And third, I unconditionally, irrevocably and impenetrably wish that someone would do a parody of Twilight.

And lo and behold, the Harvard Lampoon has. How fortuitous! Here’s the official description of Nightlight: A Parody from Random House: 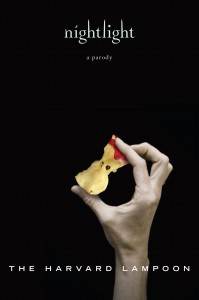 Pale and klutzy, Belle arrives in Switchblade, Oregon looking for adventure, or at least an undead classmate. She soon discovers Edwart, a super-hot computer nerd with zero interest in girls.

After witnessing a number of strange events – Edwart leaves his tater tots untouched at lunch! Edwart saves her from a flying snowball! – Belle has a dramatic revelation: Edwart is a vampire. But how can she convince Edwart to bite her and transform her into his eternal bride, especially when he seems to find girls so repulsive?

Complete with romance, danger, insufficient parental guardianship, creepy stalker-like behavior, and a vampire prom, Nightlight is the uproarious tale of a vampire-obsessed girl, looking for love in all the wrong places.

In all honesty, I found Nightlight to be more of a parody of the themes of Twilight than a page-by-page re-write: the self-awareness of Bella, the helpless Swan parents, the unrelenting clumsiness, the rushed love affair, the sparkles….it’s all there. The ending will throw you for a bit of a loop, so I won’t surprise that for you, but needless to say, they incorporate aspects of some of the sequels and the movie.

It’s not laugh-out-loud funny on every page, but that’s OK, because I was snickering a lot. Honestly, if you’re not a huge fan of Twilight (and this will demonstrate that I’m not), then you’ll never be able to read the actual saga again without the craziness of Nightlight running through your head. You’ll start to question everything. Like WHY does Bella have to fall down all the time? Why did she fall in love with Edward so fast initially based on his looks alone (ouch, the fans are going to get me for that one) and how did Bella’s father ever manage to feed himself before she came to live with him? These are important questions, people! The Harvard Lampoon offers no answers…..merely hilarity.

I get the impression that the Lampoon is in on the joke. They’re not only making fun of the original books, but also of their own parody. Which is good. Everything is exaggerated to the utmost degree. Just like the way I like my parodies to be.

Want to read the entire first chapter of the book online? Check it out over at EW.

”You don’t have to go, Belle,” said Bill. ”Sure, my street-hockey team is going on tour, but only around the neighborhood. There’s plenty of space in the car for you, your mom and me to live.”