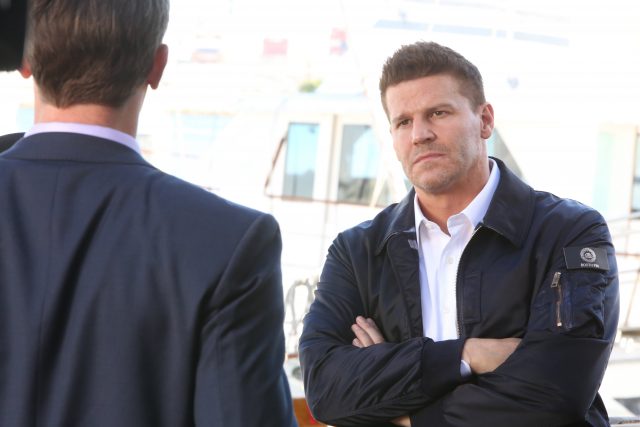 Can you think of anything more awkward than a former love reappearing his his ex’s life just as she is about to bury her father? Me neither. After the devastating death of Papa Bones, Brennan needs to be able to open up about the pain she feels losing her father. Logic dictates that she would either confide in her husband, or bury herself in work. Indeed that’s how the latest episode of Bones starts, but once former FBI Agent Tim Sullivan returns, that’s not how it ends.

As we know, Max Keenan gave his life to save his grandchildren. Brennan is not doing well waiting to bury her father, which is why working makes the most sense for her. Brennan doesn’t do well with idle time. The mystery is interesting enough. A healthy young American found shot and dumped over a cliff in Newfoundland, where she made gourmet venison jerky and may have accidentally discovered a Viking settlement. That part definitely excites Clarke, who gets a happy reprieve from the gorier details of the case to research Viking ties to the victim’s body. The victim was really a long-lost relative of a wealthy Newfoundland family which was being wooed by real estate developers to build their resort. Her death ends up being a case of wrong place, wrong time. The pompous developer wanted to go on a caribou hunt even if it meant doing so illegally, and he got the victim instead. She didn’t get to live long enough to realize that not only is her family’s land on top of an entire Viking civilization, she herself was directly descended from Vikings. At least this makes Clarke happy.

Who should walk in the door right when Brennan needs a friend? Her former flame Sully. It doesn’t help that Brennan quickly agrees to dinner with Sully, but pushes Booth to go to Newfoundland for the case. More than that, Brennan is able to open up to Sully when she hasn’t been able to do so with Booth. Sully is a good listener. Sure, he’s in love with a 28-year old oboe player and now makes sandwiches for a living, but a good listener nonetheless. After ten years he explains why he never came back for the first woman he ever loved. He always knew in his heart she would never choose him. Brennan later explains to Angela that she can speak to Sully because she doesn’t have the strength to reassure Booth that he has nothing to feel guilty about regarding Max’s death. Sully’s return ends up providing more clarity than harm. Sully himself is encouraged to commit to his girlfriend, while the open conversation sets Brennan on the path to confiding in her husband. Even more so, Brennan gains courage.

When the time finally comes to bury Max, Brennan has gathered her strength. Her eulogy was right on the money. Max was a true warrior, a true father, and a truly brave man. Now whether he is in heaven or Valhalla, Max’s final resting place is exactly where he would have wanted it-right next to Christine Brennan.

Did Sully’s return have an important purpose, or was the drama unnecessary?

Bones Season 12 Episode 8 Review: "The Final Chapter: The Girl and the Grief"

Bones gathers strength to bury her father after some encouragement from her old flame.