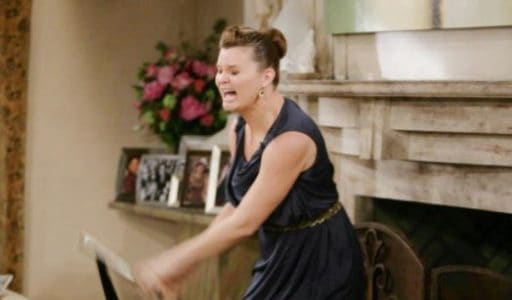 The Bold and the Beautiful spoilers indicate Quinn is going to wonder what is going on with the people in her life. She is crazy enough to want another chance to speak to Katie despite knowing she’s lost her mind, and she’s going to show up at Katie’s. Who she finds instead is going to throw her for a loop. She’s going to find Sheila there. The story she comes up with is going to make Quinn wonder what’s going on, and she’s not going to buy it. She doesn’t believe it for a second, and she thinks something is going on.

Our question is whether or not it has anything to do with what Katie has in store for Quinn or if it’s more than that. Does Katie know she’s there? Quinn knows enough about Sheila to know she’s definitely a problem, but she doesn’t know to whom she poses a threat. What will Quinn do now that she knows something is going on with this one? Will she make a decision to stick to keeping it to herself, or will she share what she knows with Ridge?

She’s spending too much time with him as it is, and she has to back off. She’s not really into the entire idea of backing off at the moment, and we all know she needs to get her life in order or she will end up hurting her husband. But we know she won’t stay away from him, and this is just another excuse for her to go see him.