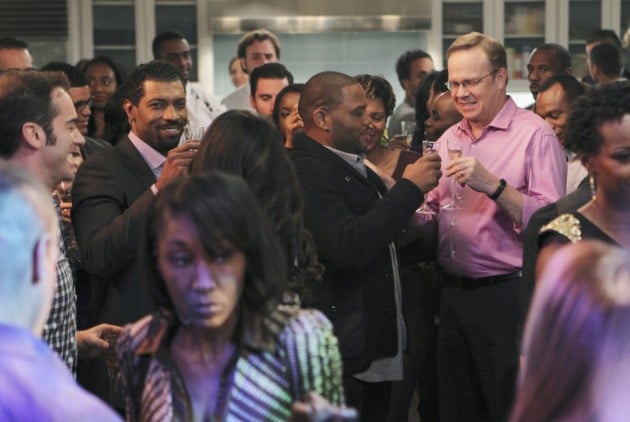 Black-ish‘s downward slide might finally be coming to a halt: after a few weeks off, “30 Something” is a complete turnaround of the debacle known as “Parental Guidance,” returning to its roots about a fun, loving family with a goofy, well-meaning and overly passionate patriarchal figure. “30 Something” – a reference to a Jay-Z song, although it’s “Young Forever” from the mediocre The Blueprint III that plays in the beginning – will hopefully represent a realignment for the show moving forward: with the nonsense bickering finally thrown away, “30 Something” has the room to tell a real story, and give some life to the family playing it out.

What tension remains is useful: even Rainbow and Ruby’s normal poking and prodding at each other comes with a function, their broad mother vs. daughter feud only accenting scenes with comedic moments, rather than becoming an integral piece of the episode’s foundation. The real conflict of “30 Something” is inside Dre (and outside; his physical breakdown over the course of a day is absolutely absurd, and hilarious), as he tries to come to terms with hitting the iconic age of 40, going through the predictable stages of overcompensating to feel young again, getting “swaggerfied” by his assistant, refusing to live in the present to glorify his past. His mid-life crisis isn’t played up to be obnoxious, though. Courtney Lilly’s terrific script really uses that tension for great comedic use, and a poignant emotional arc, as Dre comes to realize that there’s no need for him to live in the past, when his present and future is still something to be so happy about – that final scene of him reacting to his children’s slideshow is so freaking cheesy, but powerful all the same, a beautiful capper to the episode.

And the B-story only enhances this final moment more: for once, we get the kids working together on an issue, ribbing each other while they unite to honor/make fun of/hopefully not upset their father on his birthday, the four of them brainstorming different ideas for birthday gifts that won’t involve them spending their hidden nest eggs of cash – I love how true it stays to how children would be, wanting to give their dad a great birthday, but not wanting to do it at the cost of valuable allowance/holiday money. Often, creative gifts from children come out of a place of either necessity or simply being told to do so, which makes the story of the four children ring so true – twice, including the final scene, a much-needed bonding moment for the family after the recent string of episodes, which did anything but paint this family in a favorable, harmonious light (a toned down Ruby and Dre go a long, long way to achieving this, as well as Junior not being front and center for punchlines in all his scenes).

Mostly, “30 Something” is just great jokes (“Black at 40 is like being white at 25” is such a fantastic little social commentary, an unexpected bit of levity from Black-ish) and well-written interactions between members of the Johnson family, a small scope that allows the final moments of the episode to feel much more genuine than they have in recent weeks. All it takes is a few tweaks to make Black-ish work; whether the show can avoid its lesser indulgences on a regular basis remains to be seen, but “30 Something” does a magnificent job showing what Black-ish can be, if it’s able to.