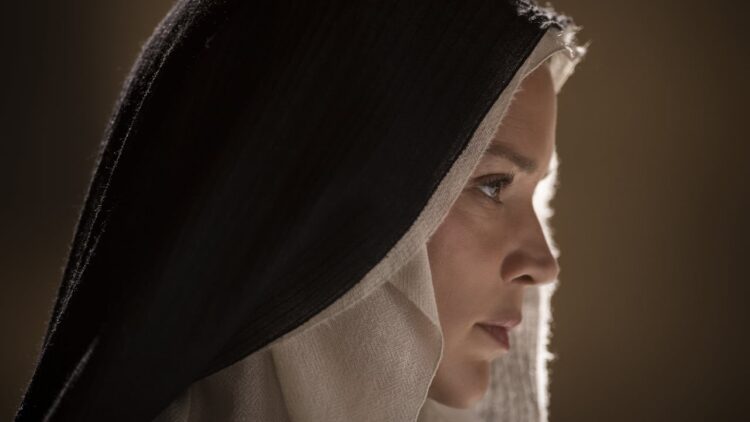 The thing about Hollywood provocateurs is that they tend to have a remarkably short shelf life.  After all, you can’t expect to keep helming A-list projects with all-star casts and massive budgets while simultaneously turning away audiences in droves by showing them exactly what you know they don’t want to see.  Lars von Trier was banned from Cannes.  Except to remake his own 1997 meta-horror hit Funny Games, Michael Hanake never really crossed over stateside.  And, infamously, much of Ken Russell’s works have been unavailable in their original, uncensored form since they were first released decades ago.

By and large, native dutchman Paul Verhoeven seems to be the rare exception: an auteur agitator who, despite his anti-commercial instigations, has enjoyed a long, successful and thoroughly mainstream career in the United States.  His 1973 breakout film – an erotic romance starring soon-to-be-Hollywood mainstay Rutger Hauer – still holds the record for being the most financially successful movie at the Dutch box office: at one point being seen by over a quarter of the country’s population and earning a Foreign Language Oscar nomination for good measure.  After a string of highly successful follow-ups in his native country – including Keetje Tippel (1975), Soldier of Orange (1977) and Spetters (1980), three more of Denmark’s twenty most popular films domestically – he made his way to California, where he became a go-to sex-up sci-fi, action and thriller director who’s mischievous tendencies and satirical flair produced some of American’s most pointed blockbusters of the 1980s and 1990s.  Robocop (19897), Total Recall (1990), Basic Instinct (1992) and Starship Troopers (1999) all emerged from his outsider imagination, along with cult classic Showgirls (1995) and the underrated Invisible Man retooling Hollow Man (2000). 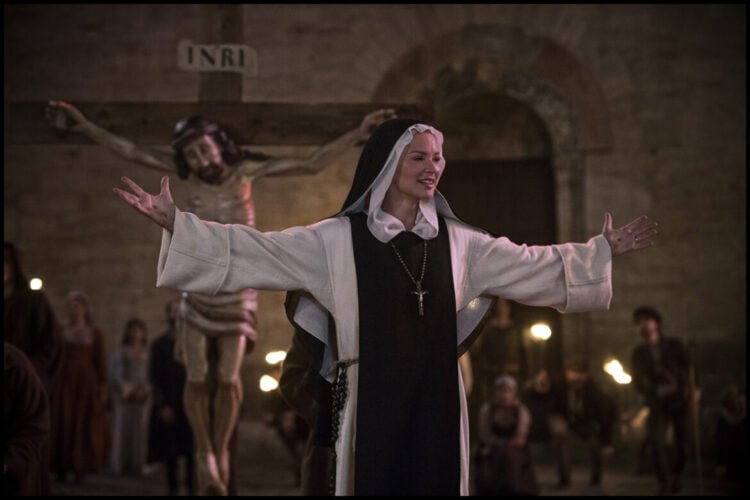 Although he’s made himself much scarcer these days, the last couple of years have seen a reemergence of his biting insight and brazen storytelling to the big screen.  Elle (2016) was released like bomb in theaters shortly before #MeToo took off as a major social movement against sexual malfeasance in the American (and, indeed, global) film industry.  Last year saw him release a historically-minded companion piece to the same: Benedetta.  Loosely based on the book Immodest Acts: The Life of a Lesbian Nun in Renaissance Italy, drawing on the scandalous tradition of softcore Nunsploitation movies of the 1970s and bringing over most of the key cast and crew members from the aforementioned Elle – including lead actress Virginie Efira, producer Saïd Ben Saïd, writer David Burke, editor Job ter Burg and composer Anne Dudley – seemed to be consciously engineered to raise the hackles in all of the respectable, well-to-do moviegoers unsuspectingly heading into theaters between screenings of Black Widow and F9.

The film opens on a young Benedetta Carlini en route to the Pescia convent, where her family intends to offer her up to the nuns there as a novice.  Whereupon they are set upon by bandits, she channels the spirit of the Virgin Mary through a bird, which drives the assailants away after defecating on them.  After committing to the nuns in Pescia, Benedetta grows into a particularly devout nun, whose budding (often taboo) sexuality, blossoming religiosity and increasingly vivid catechistic visions entwine into a heretical expression of faith that threatens to topple the Catholic Church as a moral and political force in Counter-Reformation Italy. Simultaneously paired with her meteoric rise amongst the cloistered ranks of the sisters, her cataclysmic fall from grace among the patriarchal orthodoxy and the increasingly apocalyptic signs around her (including both a  ravaging plague and a portentous red comet cutting across the night sky), the roiling anxiety of the Pescian peasants, backdoor politicking of the Church and perhaps not so idolatrous sapphic mysticism of Benedetta herself collide in a violent and frenzied showdown in an otherwise unassuming Italian village. 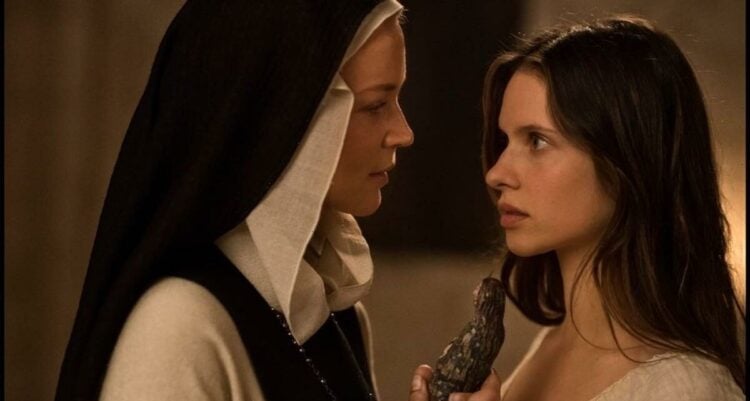 Although comparisons to Elle are only natural given the overlapping creative teams, unlikely (quasi?) feminist themes and inescapably scandalous narrative, the film with which it is most in concert with is actually another feministic excoriation of the patriarchy.  Ridley Scott’s The Last Duel, a movie that will doubtless come up again as we continue to parse through the best of last year’s ample movie slate, covers much of the same ground as Verhoeven’s film.  Both were birthed in the MeToo moment, and are inseparably entwined in the sexual politics of that moment.  Both detail the struggles of women seeking sexual justice against unjust and deeply violent oppressive social, sexual, political and religious systems.  Both ultimately center their narratives on the abused women at the heart of their narrative.  And, sadly, both films were overlooked by the gatekeepers and tastemakers of the wider film industry, despite their narrative complexities, thematic richness and kairotic subjects (although, mercifully, Benedetta , unlike The Last Duel, avoided outright mockery at the Oscars earlier this year).  These films exist in perfect concert with one another, and the various contours of their characters, stories and telling compliment one another in fascinating and powerfully illuminating ways.  If not for the gravity of their stories, they would absolutely make for the perfect double feature.

The key divergence in these movies’ approach to the subject of sexual justice is the way in which they view the institutions that their central woman stand steadfastly against.  Scott takes more of a slash-and-burn approach to the institutions of Medieval France: approaching the monoliths of the Crown and Church with a kind of Carthaginian vengeance – scorching the land, salting the Earth beneath him and leaving no two stones standing atop the other.  For Scott, it seems, the entire system was so damned rotten, so innately irredeemable, that the only justice to be had was to be level France wholesale and start over again (or, barring that, to at least have the two equally contemptable men at the heart of the story beat each other savagely to death while the rest of the world cheers them on). 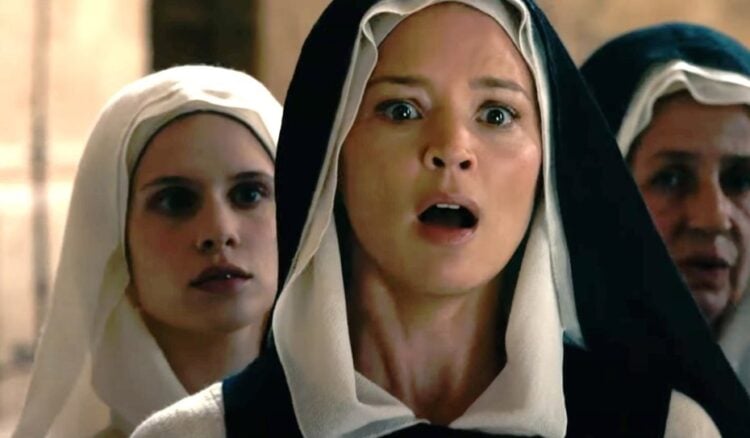 With Benedetta, though, Verhoeven does not seem to go all-in on retribution.  Benedetta is not some errant heretic with aims to tearing down the Church from within.  By all appearances, despite her outsized ambitions within the convent, her psychosexual visions of Christ, her forbidden romances with the other nuns and her machinations (both material and spiritual) against others in the Church are all genuine expressions of her deep-felt, if unorthodox, faith.  The trappings of backdoor Church politics, effete religiosity, veiled grabs for power, public paranoia and the general failings of man (and woman) kind all comingle to spoil the perfect love – in every sense of the world – that she feels with the sacred figures fueling her feverish visions, miraculous powers and hierarchical ascendency.  In essence, the core of her beliefs is unimpeachably sound, but it is everything else scurrying about the sacred institutions and society at large that that keep it from its platonic earthly ideal.

Thus, Verhoeven’s proven history as a provocateur isn’t so much beside the point here as much as it is, in fact, the entire thrust of the production.  The retro-sleaze of even further sexed-up, sapphic nunsploitation is the aesthetic sledgehammer that pushes through its unlikely feminist message.  The film pushes its inflammatory set-pieces further than the outrageous forebears that inspired its… unique… take on Catholicism.  It shows how, in his eighties, Paul Verhoeven is better tapped in and sensitive to the current cultural zeitgeist than many men half his age, delivering what will surely be seen as one of the key filmic texts of the MeToo era.