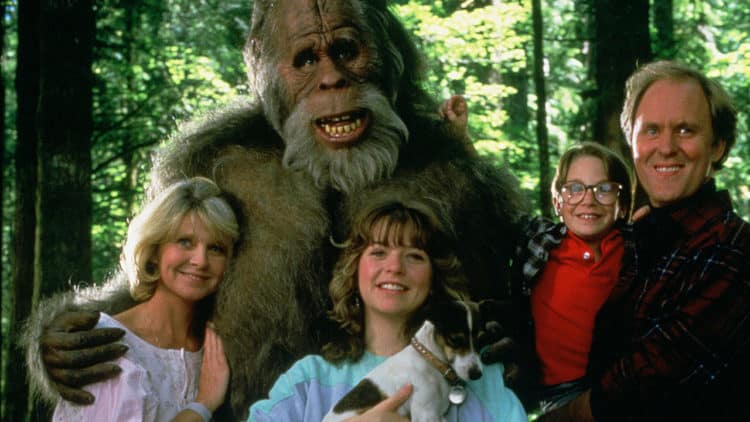 Americans have had a long obsession with the mysterious Bigfoot, also known as a Yeti, among other names. There are currently reality shows dedicated to searching for hard core proof of the creature’s existence.  There’s even a show dedicated to Rob Lowe and his sons tracking down the beast (turns out a ton of celebrities think they’ve spotted Bigfoot). While we have yet to prove that Bigfoot really exists, in Hollywood he is alive and well. Here are our picks for the top ten best Bigfoot movies of all time.

When the Henderson family comes across a Sasquatch, they are pleasantly surprised to learn that he is a really friendly guy. They become attached to Harry and the hi-jinx begin when they try to keep him a secret from their friends and family. This film is the inspiration for the popular television series that starred John Lithgow as the father who had his own issues with the extra large bipedal.

This film was a movie that was made for television. Unlike “Harry and the Hendersons,” it took a different angle on the personality of Bigfoot. The horror sci-fi adventure movie stars Danny Bonaduce of the “Partridge Family” and Barry Williams of “The Brady Bunch” who face off as they hunt for the legendary Bigfoot creature. The film was directed by Bruce Davison who also co-starred with Bonaduce, Williams and Sherilyn Fenn.

This adventure horror film was made in 1957 which shows you how far back our fascination with two legged monsters goes. This is a must see for all Bigfoot fans who also love a good dose of film nostalgia. Val Guest directs Forest Tucker, Peter Cushing, Maureen Connell and Richard Wattis in the story of a kind English botanist who teams up with a rough riding American scientist on an expedition into the Himilayas. The team goes in search of the Yeti but they’re not elated with their find.

This Bigfoot film is an action, adventure and fantasy story about a pair of treasure hunters who intersect with an unhinged ex cop and a park ranger to have a close encounter with a Yowie in the Australian Jungles of the far reaches of North Queensland.

“Rage of the Yeti” is yet another horror movie that casts Bigfoot in a nasty light. Treasure hunters who are on a quest to find soon learn that there are more important things as they fight to survive among the Arctic snow monsters who are out to get them.

This horror action and adventure film starts out on a positive note that quickly goes sour as one calamity after another befall the passenger on an airplane carrying a college football team. The flight goes down and makes a crash landing in the Himalayas. The crash was a bummer, but there were even worse things lurking in the mountains. The team scrambled to avoid becoming the next meal for the local Yeti clan.

Fred Tepper directs stars Matt Lattimore, Kevin O’Connor, Gary Sturm and Amy Shelton-White in this action horror thriller. It’s the story about an expedition that sets out to confirm the existence of Sasquatch. Things turn brutal as some unknown thing begins killing them off one by one.

Jonas Quastel directs Lance Henriksen, Russell Ferrier, Andrea Roth and Philip Granger in this action adventure horror film that is based on a true story of actual events. If you want to get the truth about Sasquatch and you have the nerve, watch this film.

This adventure family film is a heartwarming tale about an 11 year old boy who discovers the truth about the lifelong legend, Bigfoot, only to discover that he’s made a friend for life. The film stars JoJo Adams, Douglas Bennett, Derek Barton and Brian Avery.

This Bigfoot film is in the action, adventure, horror genre and centers around a group of friends who wander too far into the remote woods of Texas for a hell-raising party. What they didn’t realize when they went was that a stalking Bigfoot would raise hell with them.