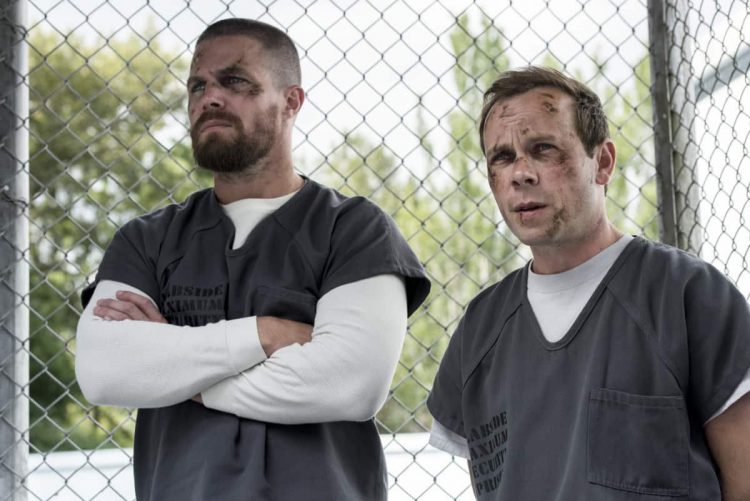 Although they receive only two extended scenes of screen time in tonight’s Arrow, the titular Longbow Hunters are already proving to be more formidable and more entertaining foes than Diaz was in Season 6. Sure, they’re technically working with Diaz, but Red Dart, Kodiak, and Silencer also stand out in fun, inventive ways, from their powers (Silencer’s abilities in particular are portrayed on screen in dynamic fashion) to their wardrobe to their minimal dialogue. Unlike Diaz, there’s no cliche-ridden monologues about how Star City is now theirs to control, or poorly shot fight scenes that try to illustrate how hard they punch. When it comes to villains on Arrow, at least early on here in Season 7, the Longbow Hunters feel like a breath of fresh air, and I’m excited to see more of them throughout this year’s stories.

But these new baddies are only a small reason why “The Longbow Hunters” is such a successful hour of Arrow. What really makes this episode work is how it dives into the common missions of Oliver, Felicity, and Diggle and depicts the lengths that each of them will go to in order to achieve their goals.

Oliver remains the most restricted of the three OTA members, given the fact that he’s still behind bars. He’s determined to find out who exactly ordered the hit against him in the showers from last week’s premiere, but when he presses Brick for answers, he’s asked to take out Yorke, the prison guard, in order to prove his loyalty. While viewers know that Oliver won’t actually go through with murdering Yorke, this storyline does provide a compelling internal conflict for Oliver, one that I mentioned in my premiere review and one that Stan, who keeps insisting that he and Oliver are now friends, brings up directly in dialogue when he and Oliver talk about his current predicament. “WWGAD?” Stan asks, meaning, “What would Green Arrow do?”

Oliver’s initial move is to warn Yorke that someone wants him dead; he encourages the guard to transfer to another prison if he can. However, when that doesn’t work, Oliver is forced to improvise, staging a fight between him and Yorke after he pretends to threaten the guard’s wife and son. He actually stabs himself with the shiv as a way to get Yorke fired or transferred and, ultimately, save his life, and it’s an example of the type of quick-thinking, unselfish strategy that we’ve seen from Oliver in his best moments. As proven on countless occasions before this episode, Oliver is willing to sacrifice his own mind, body, and even freedom if he believes it will benefit others. That’s especially the case for Yorke, who, despite his incredibly low opinion of Oliver (he calls him a common criminal who made the law into a joke), very much mirrors the former Green Arrow. Yorke has a spotless record and a wife and son he loves, and when Oliver discovers this fact about him, it’s clear that his mind jumps to directly to Felicity and William. From that moment on, Oliver wants to do everything he can to ensure that another father isn’t taken away from his family; it’s a small form of repentance for the damage he has inflected on both Felicity and William by choosing to turn himself into the FBI. Oliver can’t fix his own family right now, but he can stop another man’s from being torn apart.

But while Oliver is protecting Yorke, Felicity is attempting to bring her family back together the only way she knows how: by finding and taking down Ricardo Diaz. After being attacked during last week’s premiere, anger and determination fuel Felicity throughout “The Longbow Hunters.” As she tells Diggle, “I’m out of patience, John,” and that burning desire to see Diaz behind bars and Oliver outside of them causes a clash between Felicity and Diggle, an emotional battle that ultimately leads to Felicity leaving ARGUS and turning to FBI Agent Watson.

Neither Felicity or Diggle’s approach to this mission is wrong; in fact, they are motivated by the same hunger for revenge. But Diggle has to abide by the restrictions of ARGUS, much like Oliver has to deal with the limitations of prison, and he also prioritizes the safety and happiness of Lyla and JJ over his own vendetta. Because, as Diggle admits to Felicity late in “The Longbow Hunters,” he can’t be the Green Arrow, he can’t don the hood and be a vigilante, because he isn’t willing to sacrifice his family. He saw how the mantle of the Green Arrow ultimately tore Oliver away from Felicity and William, and he’s not willing to risk that happening to him, Lyla, and JJ. It doesn’t mean that he doesn’t care about Oliver or that he’s no longer loyal to Team Arrow. He just views ARGUS as a safer, better way of achieving the same end-goal. The protection and resources that the organization offers him allows him to honor Oliver’s mission against Diaz, even if he’s not suiting up in green every night and meeting the group in the Arrowcave. The meaning behind Diggle’s actions remain the same as Oliver’s, even if the methods differ: he wants to stop criminals and, most importantly, save lives.

And by the end of the episode, Diggle does save potentially millions of lives by getting the battery-powered weapon away from Diaz, even though it means that the Dragon continues to be free. But even though Felicity respects that outcome, it’s not enough for her, and that’s because, unlike Diggle, Felicity no longer has anything or anyone to lose. Her husband is in prison. William has been shipped away to a boarding school. Team Arrow has been dissolved. She’s fighting back to bring back everyone and everything she loves in her life, and even if it won’t ever be the same, even if it what Felicity, Oliver, and William had is gone forever, she sure isn’t going to let Diaz get away with it unscathed. Just look at the intensity that fills her face in that final scene with Watson. Hell hath no fury like Felicity Smoak scorned. 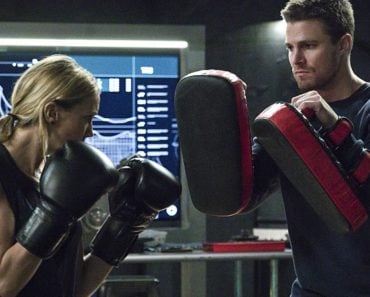