Home
Television
Arrow
Arrow Recap: The Attraction Between Oliver and Helena. Plus, Barrowman’s Character is Revealed! 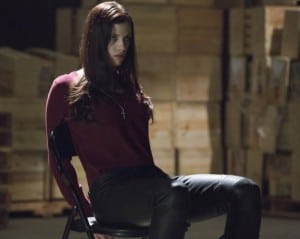 Arrow introduced fans to the Bertinelli family in this week’s episode and delivered on action, drama, shattered dreams and a bit of a surprising reveal.

Moira’s Close Call.  This week’s episode opened with a solid action sequence that had Oliver arriving at Queen Consolidated to meet with his mother for lunch and ended with her close brush with death when a hopeful business associate was gunned down.  Moira was mildly injured in the drive-by shooting by a mysterious person on a motorcycle that Oliver failed to identify (until later, that is).  As she recuperated at home, Moira tried to tell Thea to go easy on Oliver (who was continuously sneaking out in order to discover the identity of his mother’s shooter) because he’s not used to answering to anyone else after his time on the island.  Later, Moira was thrilled when Walter returned home to her.

A Mob War?  As it turns out, Oliver soon discovers that the shooter is connected to the Bertinelli crime family, as the intended victim was working for mob boss Frank Bertinelli.  When Oliver decided to infiltrate the family in an attempt to learn more, we learned that Frank was desperate to partner with Queen Consolidated on a construction project in order to keep his business afloat.  But that’s not the only thing that is unstable.  Organized crime in Starling City is on a precipice, because Frank originally suspected that the Triad was behind the murder of his employee, prompting a reappearance by China White and her boss. They denied involvement, but as members of Frank’s organized continued getting attacked, Detective Lance is becoming increasingly concerned that the city could be subjected to a mob war.

Introducing Helena.  In order to close the deal with Oliver, Frank asked his daughter, Helena, to have dinner with him.  The attraction between Oliver and Helena was quick to bloom.  It soon became clear that Helena is one of the few people who can truly understand how Oliver felt about his time on the island and how that experience shaped him.  As it turns out, she suffered her own terrible loss: the death of fiance at the hands of her father’s organization.  Oliver soon discovered Helena’s secret: she was also a vigilante (The Huntress) and she was the person who injured his mother and others in an attempt to cleanse the city of her father’s terrible misdeeds.

Protecting Your Secret.  Helena’s hatred for her father clearly ran deep, but her identity was soon discovered by her father’s right-hand man, who kidnapped her and Oliver.  He revealed that he was the one who killed her fiance, believing that he was going to turn the Bertinelli family over to the FBI.  But it turns out that Helena was the one who was gathering intel on her father and his crimes, although her fiance was the one who suffered for it.  In the end, she and Oliver managed to escape, but not before Helena took a few more victims in – as she told Oliver – a move to protect her other identity.

A New Relationship.  Throughout the episode, Oliver was desperate to believe the best of Helena.  Even when it became clear that she had inadvertently hurt his mother, he told Diggle that she must have a reason for her crusade.  Her murder of Frank’s right-hand man horrified Oliver, but he still snuck into her room later that night.  He confronted her, telling her that what she was doing was wrong, but she threw his own crusade in his face, telling him that their objectives were not all that different.  In the end, the two kissed.

Barroman Reveal.  This week’s Arrow delivered on the action and the drama with the introduction of the Bertinelli family, but it also delivered on the surprises.  The identity of John Barrowman’s character was finally revealed.  He first appeared in Moira’s room after she returned home from the hospital to ask her if she was still committed to their plan for the “future of Starling City” after her accident.  As it turns out, the two of them used to be partnered with Robert Queen, who later lost his faith in their plan.  But Moira insists that she will stick by him.  Later, Tommy was dismayed to learn that his credit cards had been cut off, prompting him to confront his father when his trust fund was rescinded.  And who is his father?  None other than John Barrowman!  It seems that the leaders of the wealthy families of Starling City have their own secret club.  Disgusted at his son’s continued laziness, Mr. Merlyn has cut him off.  Distraught, Tommy went to Laurel’s to tell her the bad news.

A new episode of Arrow will air next week on December 5th on The CW.  Watch a preview.