Home
Television
Arrow
Arrow 2.19 Review: ”The Man Under the Hood” 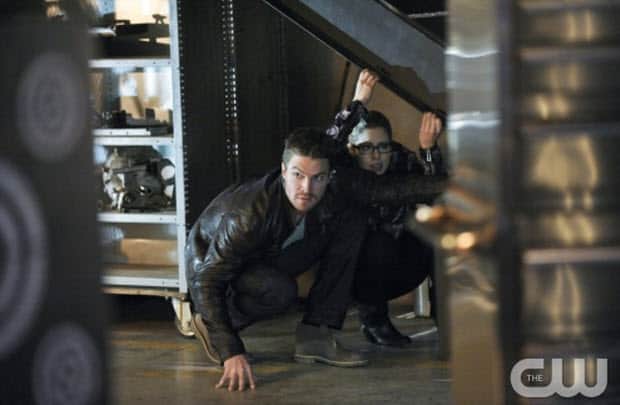 It’s fascinating that every week, Arrow manages to just get bigger and bigger no matter how big the previous episode was.

Ever since they got Laurel to start getting back on her feet, it’s been a golden streak without any breaks and seeing how she dealt with Slade’s revelation about Oliver last week, this was a particularly strong episode for Katie Cassidy. Although, the writers was quite close to messing it up a bit when she wanted to tell her father, but because Quentin is the great character he is, he refused to hear who the Arrow was.

Speaking of Quentin, Paul Blackthorne (who has become one of the best characters of this show since the season premiere) gave a heartbreaking performance in this episode. Seeing Laurel putting all the pieces together with both Oliver’s and Sara’s secret was a good character moment for her, in addition, her moment when she completely owned Kate Spencer. While she is nowhere close to the Black Canary identity from the comics, the character of Laurel Lance did at least manage to take one tiny step closer to that persona.

The A-story with Team Arrow starting the war against Team Deathstroke was insanely action packed and it’s one of the better team episodes of the season. The scene where Slade wipes the floor with all of them in the Arrow Cave was crazy and once again, all the action throughout this episode felt more like movie action rather than TV action. The things that Oliver had to deal with in this episode, made his struggle feel so connected to each and every one of those issues, whether it was getting to talk to Thea or having to deal with the evil that is Isabel who apparently, also has Mirakuru in her system since she managed to survive those gun shots. The biggest shock of this episode was seeing that Roy had been captured by Slade and was now serving as some sort of Mirakuru source to Slade’s soldiers. It’s hard to decide yet whether or not it was out of character (offscreen) for Roy to not put up a fight against Slade and Isabel when they found him, because I think I need to hear his side of the story first.

The episode served as a crossover (sort of) between Arrow and the upcoming spin-off, The Flash with the introduction of Caitlin Snow (Danielle Panabaker) and Cisco Ramon (Carlos Valdes), also known as Killer Frost and Vibe respectively in the comics. For anyone who doesn’t know, these are two of the main characters for that spin-off show. They did a good job in reminding the viewers that Felicity has been in Central City for Barry and it made sense that she would have made these connections with people like Cisco and Caitlin. It’s also revealed that because of Barry’s condition, they are now keeping him at S.T.A.R. Labs which should be interesting to see when The Flash pilot airs.

I’m quite familiar of Panabaker’s previous work and knowing that she is a fine actress, it was nice to finally see what she would bring to the introduction of Caitlin, a character who has never been in live-action before. Her dynamic with Felicity was quite the surprise as I didn’t know that they would hit it off that much. Something that this show hasn’t done a lot with Felicity is to give her friends who are outside this vigilante world so it was very nice to see that she had formed such a cool bond with Caitlin as well as with Cisco. It’s funny that they cast someone as warm and full of heart as Panabaker for a character that in the comics becomes one of the biggest ice villains.

The thing that I kept looking out for the most was newcomer Valdes since this is his first TV project and it took only a few minutes for him to become very likeable. He definitely embodies a lot of Cisco’s charm from the comics (New 52 to be exact) and the way that Andrew Kreisberg, Geoff Johns, Greg Berlanti and Keto Shimizu wrote him, I can see Cisco, as well as Caitlin, becoming big fan favorites. Their dynamic together felt slightly similar to the one that Fitz and Simmons has on Agents of S.H.I.E.L.D. and since Arrow doesn’t have a duo like that, it would be nice to see The Flash make those two characters be that duo.

The only downside with their scenes in this episode was that it wasn’t enough and hopefully, there are some deleted scenes with them on the Blu-Ray/DVD for season 2. But overall, this was a very good introduction to these two characters and it will be fun to see more of them once the show starts in the fall. After seeing them in this episode, I have to give even bigger props to David Rapaport, the fantastic casting director for both DC shows as well as The Tomorrow People, for getting these two actors.

There were some nice Easter Eggs in this episode for DC fans. Cisco and Caitlin mentions a Justice League villain, Arthur Light so it’s nice to know that he exists in this universe. The clever usage of the word “vibe” by Cisco since Vibe is his superhero identity in the comics. This is perhaps me looking too much into it, but the weapon that Cisco used against Slade was possibly something involving sonic waves and that is part of Vibe in the comics. The namedropping of Iris West (Candice Patton) and Harrison Wells (Tom Cavanagh) was also nice to hear for Flash fans.

Overall, “The Man Under the Hood” served two major purposes which was starting to build up for the ultimate battle against Slade as well as giving fans a phenomenal introduction to two of The Flash’s main characters. It’s hard to believe that only 4 episodes remains of what has been big and powerful season. Seeing how masterfully they did the last couple of episodes in their first year, you don’t want to miss any of these upcoming episodes.