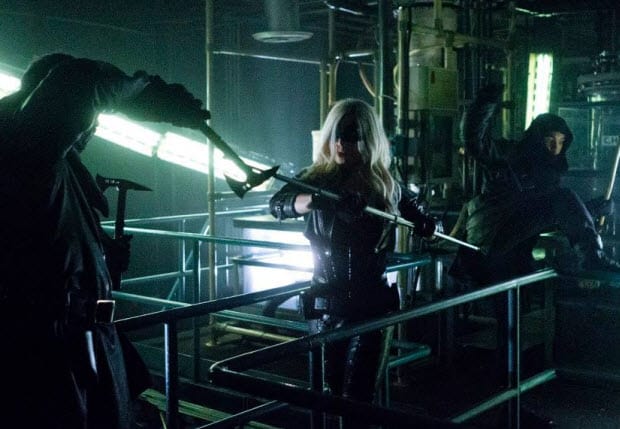 “League of Assassins” is easily the best episode of season two of Arrow so far.

Caity Lotz’s addition to the show has really fleshed Sara out as a character because from the get-go, we didn’t know much about her and we assumed that she had died. The flashbacks went to an interesting place this week as we are now following what happened to her, which I would call Sara’s Year One storyline.

While it annoyed me that she sold Oliver and Robert out the minute she got captured, it made sense. Sara wasn’t as strong as she is today and it makes the development into Canary (from a flashback perspective) more compelling.

We get introduced to Dylan Neal’s Dr. Anthony Ivo who is a character that I’m a bit familiar with from the Young Justice animated series. Neal just fits this role which is a very slick and intimidating character and I’m looking forward to seeing more of his goal of “saving the human race”.

The League of Assassins is a huge group in DC Comics and I have to congratulate the writers of this episode, Drew Z. Greenberg and Jake Coburn — as well as the producers – for doing such a fine job introducing this league into the Arrow universe.

While I was hoping that there would have been at least five members with Navid Negahban’s Al-Owal, but I was fine with this. Negahban’s character was really fascinating as he seemed like a force to be reckoned with.

The fact that he trained Malcolm Merlyn made it even more shocking when he was killed off, because I thought he would be one of the recurring villains for this season.

It was interesting that they decided to use the line “the child of Ra’s al Ghul” which could mean that we might see Talia al Ghul before her dad shows up. I hope though that we will actually get to see Nanda Parbat eventually because I have always wanted to learn more about that place. James Bamford and his team continue their amazing work and I think that this episode was their best work with all the fighting scenes that we got.

While I think every actor in this episode brought their A-game as always, I think Paul Blackthorne and Lotz’s performances were some of the highlights of this episode. Sara finally decided to tell her dad the truth and it lead to a lot of emotional scenes of this daughter-father reunion.

It felt so real and I’m just so glad that Quentin is finally becoming such a fantastic character as well as bigger. I was definitely crying a bit when Quentin had to have his heart broken once again as Sara had to leave. Will this poor man ever find peace?

Speaking of Lances finding peace, I’m really getting concerned for Katie Cassidy’s character. I think the writers are really going to break her down so that she can rise stronger because I feel so sorry for her. While it may be getting a little bit too much regarding how damaged she is, I definitely feel for her. Hopefully this may be resolved before we get to the winter hiatus, but I doubt that.

The Moira plot continues and while it’s not the best circumstances, we are getting more worthwhile family scenes. I still feel that something is fishy with Dylan Bruce’s character — who is doing a fine job on Arrow so far — because doesn’t it feel odd that he would assign Laurel to a case with people that she knows so well?

Stephen Amell, Willa Holland and Susanna Thompson always have such powerful scenes together as a family making for one of the show’s best dynamics.

Overall, “League of Assassins” marks as the best episode of season 2 so far with amazing performances by the cast, a strong script by the writers as well as excellent directing. I can’t wait to see more of what season 2 has in store for us as Arrow is just hitting all the right arrows — pun intended — and I hope you are as well.