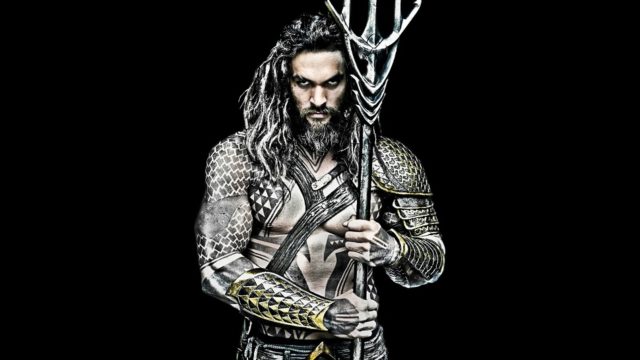 With the emergence of the Justice League trailers and posters we’ve finally gotten a chance to see Aquaman in action.  But our best chance to see Aquaman in all his glory will be when the solo Aquaman movie is released.  We’re going to be waiting quite a while for that but media members did get an inside look at some of the things we’ll get to see in the movie.  During CinemaCon director of the film James Wan introduced some intriguing concept art. In that concept art, fans got to see humans riding sharks into battle.  Yup, you read that correctly.

Initially when people looked at the art during the panel, they were under the impression that a space-like battle scene was going down (which it was).  Everyone in the crowd thought that the images in the distance were ships going into battle.  However, upon closer inspection they were in fact Atlanteans riding on top of sharks.   Here’s a direct quote from Wan himself.

It’s not until the ships get so close to you realize that’s not a spaceship. That’s a human riding a shark.

Even better is that the sea creatures will be armored.  Excuse me if this sounds completely ludicrous but I’m conjuring up visions of Sharknado and Sci-Fi right now.  I know it won’t be like this on the big screen but still, it’s pretty amusing.  Then again, when have we have seen people riding sharks into battle?  I hope we’ll get to see a piece of that in the trailer.