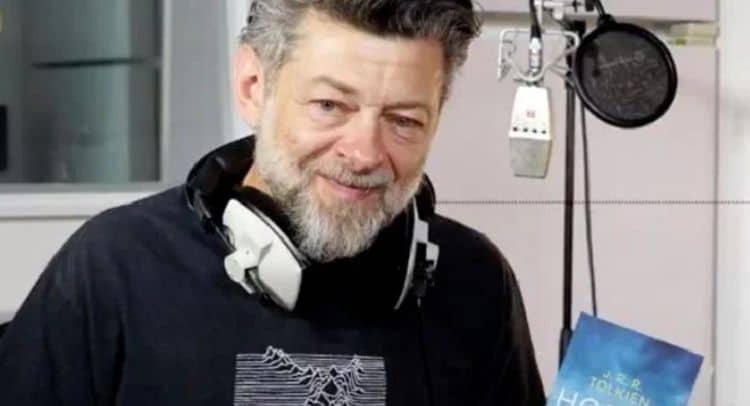 When he’s not playing an intelligent ape or using the whining voice of Gollum, Andy Serkis is quite the narrator as this short clip proves. His voice is actually quite soothing and lends a bit of whimsy and credence to the story from the start, and one can only imagine just how great it sounds when he really gets going. As one of the more popular and multi-talented individuals in show business, Serkis has been showing people what he can do for a very long time, and his list of credits is exceptionally long and impressive. It’s kind of ironic that the guy who played one of the most villainous yet tragic characters in The Hobbit is now reading the story aloud for those that want to hear, but it’s also kind of fitting seeing as how he’s had so much to do with the story. Those that want to think of him as Gollum are going to need to adjust their thinking just the slightest bit since when Serkis is able to shift from character to character it’s very easy to get into his act and just enjoy what he can accomplish. But narrating a book has to be a bit rough even for an actor since it involves pushing forward through the story and taking breaks occasionally in order to keep one’s voice from giving out.

We are delighted to announce the release of a brand-new audiobook of The Hobbit, read by @andyserkis!

Listen to an extract from this magical recording, and pre-order here: https://t.co/MhvQ2ZhEZx pic.twitter.com/ahBT4azXZ6

Plus, the idea of reading something by Tolkien aloud has to be an added challenge simply because the author used a great deal of prose in his stories and when comparing his novels to the average novel of today there are a lot of differences when it comes to style and form. Getting one’s tongue to wrap around certain words and phrases that Tolkien used and the form of speech that he favored might be kind of tough for some folks, and learning where to add a bit of oomph to the story and where to quiet down would be a skill that might be innate in some people but would need to be learned by others. Let’s be realistic here, reading a book is easy for some people, as some folks fly through book after book and can read several within a week if given enough time. But reading a book aloud does require some effort and some strain on one’s vocal chords, and attempting to read words that one doesn’t normally pronounce, while taking the time to add inflection and emotion to each passage, can be kind of tiring.

After all he’s done and is still bound to do in his career though one can easily be impressed by the idea that Andy is the kind of guy that knows how to slow it down and do something this methodical and this time-consuming. Given all that he’s done to this point it’s not hard to think that he knows a lot about patience, showmanship, and has a very good idea of how to please the fans. One does have to wonder if he ever grows tired or weary of it though, as many actors might after a while. There’s no doubt that everything he does manages to take a toll now and then, but it’s also evident that he enjoys what he’s done thus far, as he keeps coming back for one project after another. The scope of what he’s done with his career at this point is kind of amazing since he’s been a part of many different projects and has gone on to be one of the most prolific actors in the business at this time, even if he’s not always recognized as such. Many people have come to notice him throughout the years thanks to his many talents, so reading a book aloud to those that are willing to listen isn’t too surprising, but listening to his voice is quite cathartic in a way since he does have a very pleasing tone and is able to bring to life The Hobbit in a way that might fit with the narration that some folks here in their heads.

It’s likely that a lot of folks might find it funny to hear the man that played Gollum narrating the book, especially given the nature of the character that he brought to life in such a masterful way. Some might think that anyone creepy enough to voice such a character might not be able to take up the book and turn in a performance this amazing, but obviously Serkis has spent a good deal of his life pleasantly surprising people. It’s a wonder if he’d consent to narrating the Lord of the Rings trilogy or any of Tolkien’s other books, as it does feel that he might be the guy to really make them sound a little more exciting and engaging in his own way.