Home
Movies
An Animated Injustice: Gods Among Us Movie Is Coming 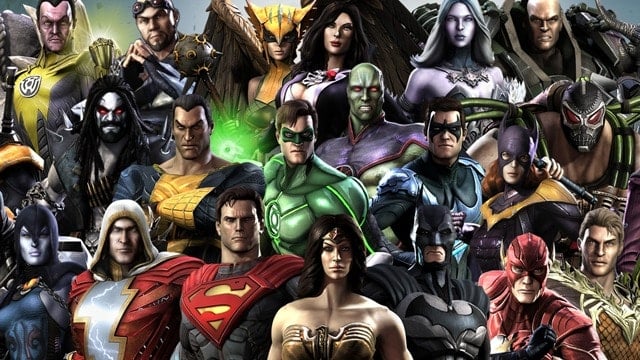 If you’re a big fan of the Injustice: Gods Among Us gaming franchise, there is some good news for you all. No, we will not be getting a third installment like we’ve been waiting for. But don’t worry, I predict an announcement for that game will be coming soon. But the news that I’m talking about is more of a sudden shocker.

It has been reported that Warner Bros. Home Entertainment is developing an animated Injustice: Gods Among Us movie. Honestly, I’m a little surprised it has taken this long. The Injustice series has really grown on gaming fans, and the comic series is some of the best comic book writing DC has dished out in years. For me, I’m super excited for this movie, but I’m still curious about how they’re going to pull this off.

I mean, yeah, the movie will cover the core of what the Injustice games are all about. Just in case you’ve never played them, just imagine this: Superman loses his way after being tricked by the Joker into committing a horrible tragedy and decides to take a more direct approach to fighting crime. By direct, I really mean he decides to become a dictator and make peace on Earth through brutal force. Of course, this doesn’t sit too well with some other DC heroes, most notably the Batman. When does Batman not take the center stage for the hero? Hey, I think we’re all okay with that.

Now if you’re one of those guys who has kept up with the games and the comic series, you already know where the story has left off. You may also know how it all began with the volumes that told the five year story prequel set before the games. If you haven’t checked those out, then I seriously urge you to. Injustice: Gods Among Us may have originated as a video game, but the comics that were written for the series is phenomenal. I will warn you, however, that if you’re a huge Superman fan, once you read the comics, you’ll probably never look at the big blue boy scout the same again.

The Injustice: Gods Among Us comic series does a great job at breaking down Superman from the heroic icon to the murderous dictator he becomes by the events of the game. Every volume (or every year), he descends deeper into madness and keeps finding reasons to justify his brutality. After you read just one of the volumes, you may find it hard to believe that Supes can ever redeem himself. But hey, that’s what that upcoming third Injustice game is for, right? Oh, please, Ed Boon, just say that you’re working on it already.

But as for this animated movie that’s in the works, there are things that I’m really wondering about. For instance, I want to know precisely when in the Injustice timeline it will take place. Will it cover the comics that served as the prequel story to the game? Or will it cover the comic series that took place in between the first and second Injustice games? Just a reminder, Superman was locked up in his cell bathing him with red sun radiation at this time, but with his regime gone, many DC supervillains decided to fill that power gap.

And who was there to stop these supervillains? Well, many underrated DC superheroes, but the main one was, of course, the Batman. He fought some serious heavy-hitters in the Injustice 2 prequel comics, including Gorilla Grodd, the Suicide Squad, Jason Todd (dressed as his own Batman) and one of his greatest enemies, Ra’s al Ghul. Oh, and if you kept up with the whole comic series, you’ll know that something seriously messed up happens, relating to one of his closest allies. I just can’t spoil it, but all you need to know is that it’s very mind-numbing. Just check it out, please.

The prequel comics to Injustice 2 weren’t as intriguing as the prequel comics to the first game, but they were still awesome. Now I wouldn’t mind if this animated movie covered those stories. It would be very cool to see how Batman and his team worked on repairing the damage the regime did. More importantly, we’d get to see Batman interact with the imprisoned Superman. The comics didn’t show many interactions between them, but the animated movie sure can. That would honestly be more epic to see than any fight scene. Did anyone really wonder how Batman talked to Superman while he was imprisoned? I almost picture it as some kind of rough therapy.

Now if this animated Injustice movie doesn’t cover any time period from the games or comics, it can tell a different story. Perhaps this animated movie can be a continuation of a story in the Injustice universe, or it can very well expand the story of the games. The last Injustice game gave us two optional endings: you can either side with Batman or Superman. Batman’s ending was the good one and Superman’s ending was the bad one. Which one was canon? We’re not sure yet, but maybe the movie can give us an idea.

In fact, the comics gave us a little insight on how the Superman ending played out. There was a lot of evil Superman, but there was also a little crossover with a guy called He-Man. I know, now the Injustice series is getting crazy. Then again, that’s not a bad thing, because we want them to go bigger. Now this animated movie can show that, or maybe tell us how Batman’s ending turned out. I have a feeling his ending is the canon ending. If that’s true, then the animated movie can be the prequel that leads into the third Injustice game. I think it’s a good idea, since we already saw what Superman’s ending led into.

Those are my theories on what the animated Injustice movie will be like. Honestly, I just expect the unexpected and I have a feeling it will be good. As a fan of DC animated movies and the Injustice games, this movie really excites me. Want a first look? Just wait for Batman: The Long Halloween, Part 2, and we’ll get our first sneak peek.

Let’s Talk About The Offer

Five Movies To Watch When You’re Done With “Torn Hearts”

Five Movies To Watch When You’re Done With “Monstrous”

When Do We Get to See Polaris?