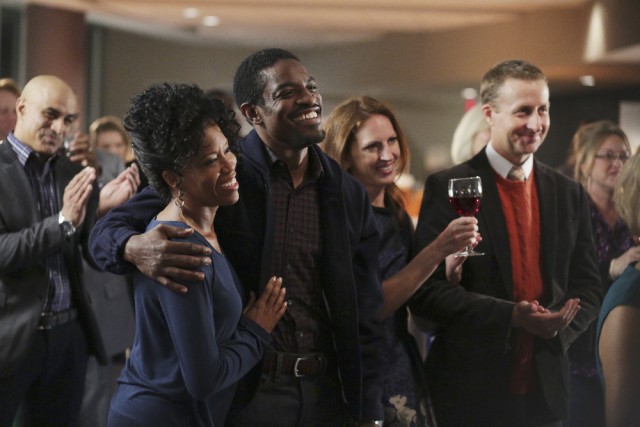 American Crime might be the most serious show on television, a show so relentlessly dour, it often undercuts its social examinations with a distracting self-serious tone, not to mention a cast of wildly unlikable (though admirably performed) characters. Never has a show so visually evocative dragged so much, both narratively and emotionally. On its quest to be an Important Show during Season 1, American Crime often tripped over its own agenda – though admittedly, it delivered its two best episodes in the season’s final third, offering some form of emotional catharsis in its numerous ancillary stories (at least, in a few of them; it did have two suicides in it).

“Episode One,” the dramatically-titled premiere of its second season, offers a lot of what didn’t work about American Crime‘s first season as a foundation for Season 2 which centers around the possible rape of a male student at a prestigious charter school, presumably perpetrated by one or more members of the basketball team. Most noticeably, “Episode One” is as subtle and nuanced as a North Korean government press release, whether it’s the student who almost goes too far trying to get his girlfriend to go “all the way,” or the basketball player who literally says “I would so rape that” to another friend, regarding pictures of a girl on a phone (this same kid also pretends to penetrate another male friend mere moments earlier, really ratcheting up the deep thematic material). From there, “Episode One” is a downward spiral into the same kind of nonsense Season 1 peddled in, with its one-note characters and propensity for shoving as many Big Issues into 42 minutes as possible.

Perhaps the most frustrating element of “Episode One” is how it utilizes its returning female cast members. Why can’t John Ridley allow Felicity Huffman or Regina King to be anything but insufferable? Why are two top-notch performers being wasted on a show that hates its female leads so much? Last season, Barb and Aliyah drowned out whatever interesting ideas they brought to the table with their narcissistic self-importance, characters written with such self-righteous attitudes they quickly became parodies of the people Ridley clearly disdains. And with that, a lot of the many interesting ideas and conflicts he sets up in “Episode One” feel underdeveloped: Leslie the headmaster and Terri the bigoted mother are essentially carbon copies of their Season 1 characters, who themselves were often the most unbearable elements of the show. Everything King’s Terri has to say comes with such heavy-handed predictability, it makes it really difficult to engage with the material it’s trying to present – which in itself, is fairly interesting, if slightly overblown fare.

While I struggle to get on board with John Ridley’s dialogue and characterization style, his ability to throw a dozen different ideas into a single story is impressive to watch in “Episode One.” Everything from the deviancy stemming from teen sexuality, to how economics plays into every facet of life – be it social status, education, adolescence, or the law – is on the table in “Episode One.” It’s certainly very heavy, dull material, but its relentless pursuit of examining the rampant social injustices of the modern world has a certainly nobility to it, even if American Crime greatly exaggerates that sense of importance.

I hesitate to call American Crime a ‘bad’ show: there’s no doubting it’s extremely hard to watch, as pessimistic and intentionally inflammatory as it in on a minute-to-minute basis. But its cinematic flair, absolutely stunning performances (even in terrible roles; how well King and Huffman commit to the ugly turns their characters have is amazing), and reckless narrative abandon can still make for pretty captivating fare. Can it overcome its preachy nature and thin characters to become the truly evocative, transformative television it so obviously wants to be? “Episode One” certainly suggests it might, but it also presents plenty of reason why a fresh coat of paint and a few role-reversals may not be enough to disguise what made most of its first offering so insufferable.

American Crime‘s second season debuts with a new look, new characters, and a new story – and unfortunately, a lot of the frustrating elements that defined its freshman offering.