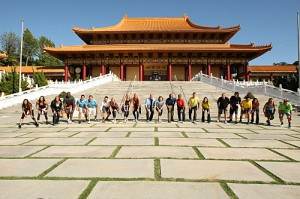 Last season on The Amazing Race, the wheels started to come off the bus more noticeably. Although the show won its 8th Emmy earlier this month, the Unfinished Business season as a whole was pretty underwhelming, with relatively easy challenges, alliance domination like no other season, and a winner that never rose above the pack during any particular part of the show, minus the finale.

Which is why I’m so disappointed in “Kindness of Stranger”, the show’s 19th season premiere. It seems that instead of tightening up the proceedings, casting strong, capable teams, and getting back to what made the show so great in the first place, the powers that be decided to go in the opposite direction and made the show that much more maddening.

The challenges during the premiere were a little silly and seemed too easy to be getting the response they got from the teams. I understand the show mixing in an occasional challenge that was based on luck, but having it be the opening challenge again set a poor tone for the rest of the episode. It essentially boiled down to who had better luck picking the right brightly colored umbrella with a word on it. The teams didn’t even have to name the city they were supposed to be headed to (Taipei, Taiwan) and the initial word they were given (Wan Pei) wasn’t scrambled to make them have to think. They did have to think during the road block, at least, but did a number of teams really have trouble using the phone and remembering a compound sentence? I can only imagine that with adrenaline pumping, the sun beating down on you, and the pressure of winning a million dollars, you could become a little scatter brained, but man, it almost made me sick to watch team after team of full grown adults fall apart trying to use the phone. 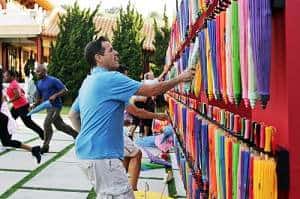 Speaking of the teams, there weren’t a lot of great first impressions made, which hints at another ho-hum cast. Thus far, I like the first leg’s winner, Ernie and Cindy, the best, only because they seem prepared and focused while still making the race fun. We were warned that Cindy’s a bit of a control freak, so hopefully she can keep her head and continue her team’s winning ways. After the engaged couple, the only team I had a strong-ish positive response toward were the dad/son adventurers (Laurence and Zac), but after that, it was a mix of teams with not enough coverage to form an opinion on (Sandy/Jeremy, Team Flight Attendants), teams with one person that seemed okay and one rubbed me the wrong way (Marcus/Amani, Justin/Jennifer), and teams that should have been eliminated in a massive three-way (ooh) elimination of ineptitude (Bob/Cathi, Team Showgirls, Team Twins). Part of the reason to watch The Amazing Race is to have someone to root for and judging by the crop of teams thus far, there won’t be much to choose from in the final weeks of the season.

The non-elimination element of tonight’s episode was just frustrating to watch. While I think that Bob and Cathi seemed like nice people and it’s a shame they were on the verge of elimination, they did so poorly in the opening leg that it’s clearly just delaying the inevitable. On top of that, there’s a chance that a team with potential could be knocked out based on the newly instituted double elimination. Having it be so early in the race feels like a copout, in the sense that “we want to try something new, but we don’t want double-eliminate any of your favorite teams, so we’ll do it early in the race before you get attached”. I think the double elimination could be an interesting card to pull during a season, but if it’s used too early, it doesn’t have as much impact. It would be awful to lose one of your favorite teams midway through the race due to the double elimination, but there’d at least be serious stakes to that leg. Here, it just leaves me cold, but I hope that we don’t lose someone who could do some damage later.

The Amazing Race‘s season premiere wasn’t the rebound that I was looking for after a lackluster last season. We obviously still have time to get to know the contestants, but the challenges weren’t the best and the twist at the end is only prolonging the elimination of Team Grandparents. I have faith that the rest of the season will pick up in quality and in urgency, but for now, the wheels on the bus are just barely hanging on.