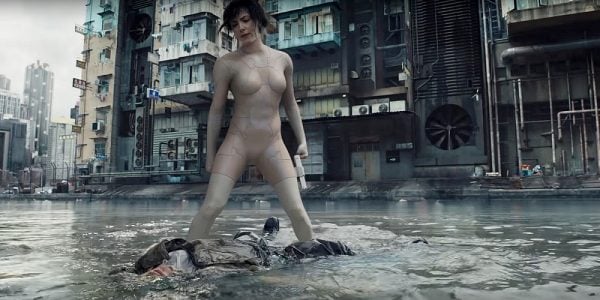 Mamoru Oshii’s Ghost in the Shell has been part of the bedrock of the science fiction community since it first hit theaters in 1995.  As much as it admittedly was just the latest in a long line of action anime appealing to a relatively niche market outside of Japan, it was a meditation on the Human condition and mankind’s relationship with technology.  The Matrix borrowed — some say stole — many of the film’s ideas and visuals, repackaging it for an American audience.

Although long sought after by fans of the original, the American remake of the film has been fraught with controversy since it was first announced, not the least of which was the casting of Scarlett Johansson as The Major, an Asian character in the original film.  While issues of white-washing characters originally intended for minority actors has long been an issue — even Memoirs of a Geisha got slammed by casting a Chinese actress as a Japanese character — it has only conflated in recent years.  The #OscarsSoWhite controversy of the last two years criticized the industry for failing to recognize minority filmmakers who managed to produce worthwhile work and, more recently, Doctor Strange replaced the traditionally Asian Ancient One with Tilda Swinton. 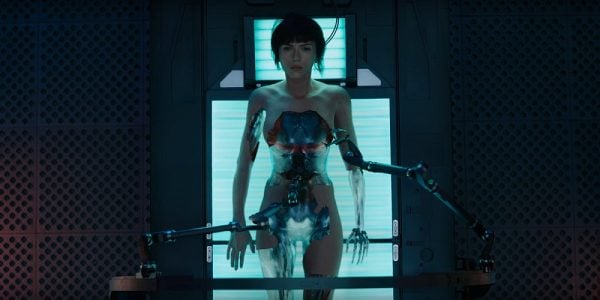 While depriving prominent roles to minority actors who are too often sidelined in small or caricatured parts is a deplorable practice in of itself, I can’t help but feel that the case of Ghost in the Shell is a bit more problematic that the film’s well-intentioned critics make it out to be.  The Major isn’t just Human: she’s Transhuman.  She is a person who, through augmenting her body with technology, has transcended the Human condition.

She has been stitched and remade and modified to such a degree that to call her Human is simply incorrect.  Conservatively speaking, she’s a cyborg, although the original film posits something even more radical entirely. 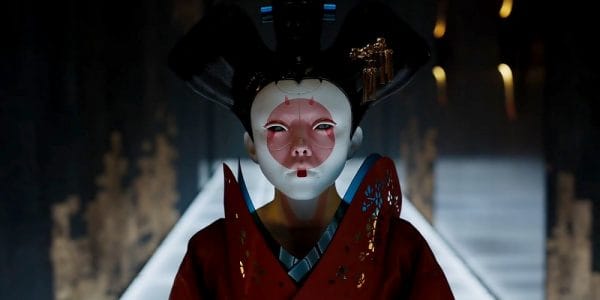 As such, it is possible — even reasonable — to assume that her physical appearance has been drastically altered from her original form.  The trailer appears to preserve the original setting of Japan, even including a troupe of Geisha-bots.  Maybe she was originally Japanese, but through augmentation gained a more Western appearance.

From the first look we were just given, that’s an interesting (if still somewhat problematic) possibility.  All I’m saying is that it might still be addressed in the film and it might put an interesting twist on a genre classic.  I, for one, will at least give them the benefit of the doubt as far as that’s concerned. 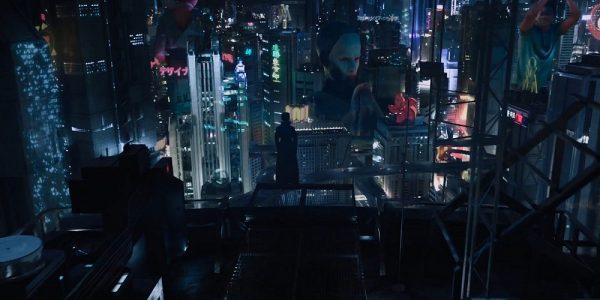 And as for the trailer itself, it looks amazing.  It’s loaded with elaborate action sequences that recreate some of the most visually stunning scenes from the original.  These include a water-logged fight between an invisible Major and a suspected terrorist and a midair covert mission outside of a skyscraper.  It’s safe to assume that fans of the original will find a lot of material preserved from the 1995 film.

Despite the controversial and potentially problematic casting of Scarlett Johansson, she is a fantastic actress who has both the physique to pull off the extensive action sequences and the acting chops to handle the quieter, more character driven moments.  This is the exact combo that has made her such a fan favorite in the Marvel movies and this is why she is in projects as diametrically opposed as Lost in Translation and Lucy.  The Major is uniquely suited to her acting skill set, assuming, of course, that we’re right to give the filmmakers the benefit of the doubt with not casting a more ethnically appropriate actress in the role.

The sequences which are not directly pulled from the original film appear to be largely inspired by Blade Runner: urban darkness punctuated by neon and white.  And, from what I’ve seen of it, it fits the material perfectly.  While fans have been given ample reason to worry about the direction of this film, the trailer has done a lot to quell these lingering doubts.  The movie looks great and I can’t wait to watch it.