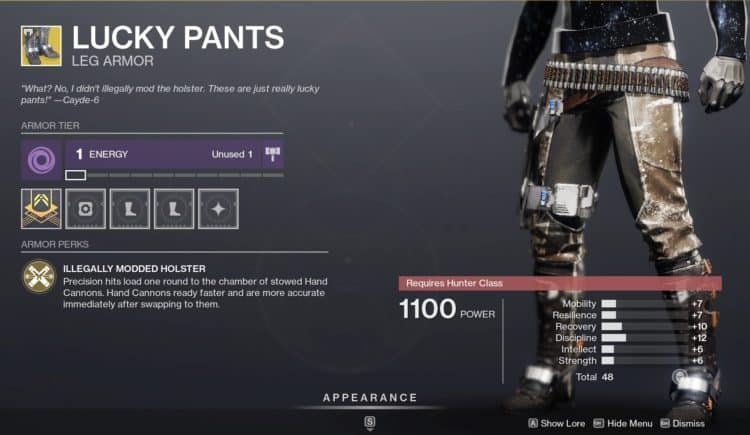 Destiny 2 is well-known by players all around the world as having some incredibly unique weapons and pieces of armor called “Exotics.” These Exotic weapons and armor pieces grant the user all kinds of abilities, and provide them with other useful perks. Today, we’re going to talk a bit about the Hunter class and the Exotic Helmets that are currently available to players who have chosen this class. There are a total of seven Exotic Boots that Hunters have available to them, and while there certainly are some that aren’t the greatest, there are others that are nearly essential to maximize your mobility – the most important aspect of Hunter builds. So, how do each of these Exotic Hunter Boots stack up against each other in Destiny 2?

The Bombardiers have an Exotic perk called “Parting Gift” that states “dodging leaves behind an explosive that detonates after a short delay, damaging enemies around it.” While this seems neat in theory, the actual effect is terribly useless. It would be interesting if Bungie reworked these Hunter Boots to maybe disorient Unstoppable Champions, maybe then they could actually have some sort of use? I actually think that would make a lot of sense, and we would genuinely start to see more and more players using these if that were the case. Unfortunately, it is not.

Gemini Jester allows you to disorient nearby enemies and temporarily remove their radar after dodging. This is really good in PvP, and….that’s about it. I mean, disorienting certain enemies in PvE can be good, especially on yellow bars, but that also means you have to get close enough to dodge near them, and at that point you should probably just take a Shotgun out and blow them away. Not terrible, but definitely not great either.

Lucky Pants have an Exotic perk on them called “Illegally Modded Holster” which says “precision hits load one round to the chamber of stowed Hand Cannons. Hand Cannons ready faster and are more accurate immediately after swapping to them.” These are actually pretty useful, though it is only useful for Hand Cannons, which is a bit unfortunate. I think if it were to allow you to overflow the magazine of a Hand Cannon depending on the number of precision hits you hit on a target, that could be incredibly powerful. I’m thinking Eriana’s Vow with about 20 rounds in the magazine. Yeah, that sounds pretty solid.

Fr0st-EE5 are actually a really good option for a Hunter Exotic. They increase your grenade, melee, and doge regeneration while you’re sprinting, and dodging also increases your sprint speed. Abilities are huge in Destiny 2 and if you can maximize your ability regeneration, then you’re already in pretty good shape.

If you’re running Tether, which – as a hunter – you more than likely are, then Orpheus Rig is an essential Exotic to have equipped at all times. Its Exotic perk, “Uncanny Arrows,” states that this Destiny 2 Hunter Exotic “provides ability energy for each enemy tethered by Deadfall anchors. Moebius Quiver has more shots.” Again, the ability to maximize your ability regeneration in Destiny is one of the most powerful things in the game. If you run into a massive group of enemies, toss out a whole bunch of Deadfall anchors (tethers), you can get a whole bunch of ability energy back right away. Absolutely amazing.

Star-Eater Scales are one of the latest Exotic armor pieces to be introduced into Destiny 2. These were brought into the game with Season of the Splicer, and they have absolutely busted the game in the best way possible. The Exotic perk, “Feast of Light,” states “you gain additional Super energy from Orbs of Power you pick up. While your Super energy is full, picking up an Orb of Power overcharges your Super, causing you to gain a burst of healing when cast and a bonus to your Super damage. At maximum overcharge, you also gain an overshield.” This Exotic was insanely powerful when it was first released, but unfortunately, Bungie has nerfed them into oblivion, requiring an extremely unnecessary amount of Orbs to overcharge your Super now. They’re still extremely potent, but not nearly as much as they were pre-nerf. They also make you look like a fish!

If there’s one thing that I love more in Destiny than ability regeneration, it’s movement speed. St0mp-EE5 are absolutely the best Hunter Exotic Boots, by far. The Exotic perk on St0mp-EE5, “Hydraulic Boosters,” states that it “increases sprint speed and slide distance. Improves High Jump, Strafe Jump, and Triple Jump.” There are so many places that you can reach with St0mp-EE5 equipped, compared to if you don’t, and honestly it’s just so nice being able to run around like Sonic the Hedgehog.