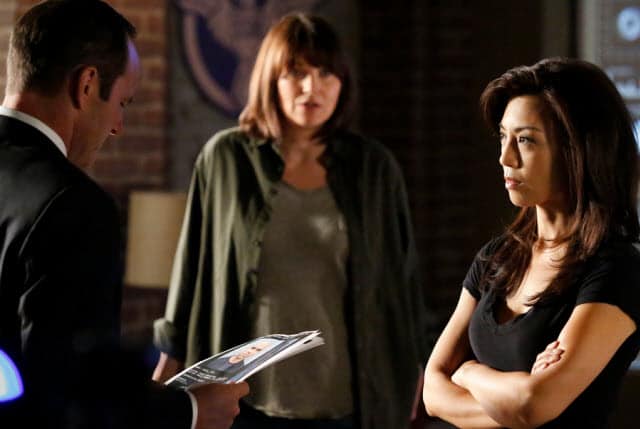 Season 1 of Marvel’s Agents of S.H.I.E.L.D. may have had a bumpy road to begin with, but it ended perfectly as it was allowed to reboot itself and we got a presentation of that in last night’s fantastic season 2 premiere.

The episode opens in a flashback where we see Hydra packing up the very first 0-8-4 that is revealed to be known as the Obelisk. Not sure if this is something from the Marvel Comics, but it wouldn’t be surprising if it is. We get the Agent Carter cameo with Hayley Atwell as Peggy Carter along with members from the Howling Commandos and hopefully this is what that show is going to be like when it premieres in January.

Even though I loved the pilot from last year, seeing this season premiere felt like watching a completely new show and the few complaints that I had about the show last season has been taken care of in just one episode. We get to meet a bunch of new characters from Lucy Lawless’ Agent Isabelle Hartley to Nick Blood’s Lance Hunter as well as Henry Simmons’s Mack Mackenzie. I enjoyed them all for different reasons, I especially loved the sassy Lance and let’s be honest here, that accent alone is a superpower.

This was almost a flawless episode and one of the things that bothered me was the decision to kill off Hartley in the first episode. Why would you get Lawless who is one of the most phenomenal actresses I know and then kill her off in the first episode? Could it be another case of “looks can be deceiving” situation or is she actually dead? I really hope they surprise us next week and reveal that she is alive, but from the looks of it, she is dead-dead.

Even though we are seeing a new S.H.I.E.L.D. having been formed, I love how it managed to feel big as this version of S.H.I.E.L.D. doesn’t feel like it’s only Coulson and those 5 agents he formed a team around last season. Clark Gregg as Director Coulson is just epic as you see this completely new side of him and even though I didn’t like that he was keeping a distance from each agent, I still admired it in a way.

This premiere hit all the right notes and you can really sense that the show-runners learned what worked and didn’t work last season and applied it to season 2. There is a better balance between the comedic and dramatic tone. But the most important thing is that they are going full into being a Marvel show, not to say that last season 1 didn’t feel that, but “Shadows” did it slightly more.

We get to meet Crusher Creel aka the Absorbing Man and even though I wasn’t familiar with him prior to this episode, this is a perfect villain to have on television since he is a famous Hulk villain. The shocking thing was seeing how many objects he could absorb because even though I knew he can absorb anything, I was concerned if they could really use that much of their budget on special effects, but clearly they could. It looked amazing and we did get some pretty cool action sequences, especially because of him and Brian Patrick Wade filled that role perfectly.

You can really sense a lot of growth in the main characters that we met in the first year, especially in Agent Skye as Chloe Bennet has really come a long way with this character. Her scene with Ward down in the vault was so intense to follow because you don’t know if he is twisted or not and if he really means every word that he says to her. Although I have to say that the beard looks perfect on him. It will be intriguing to see what kind of role he will play this season as he is now locked up.

We get to catch up with Fitz who went through some pretty rough stuff in the season finale and seeing how damaged he is makes me hate Ward even more because this is his fault. Iain De Caestecker did a fantastic job in giving us a very different version of his character and it’s going to be interesting to see how he develops now throughout this season.

It was absolutely heartbreaking to find out that Simmons had left the team and that every time we saw her next to him, it was in his head. I thought something was off when Melinda would only look at his direction in their scene and not Simmons. FitzSimmons will never be the same and the thing that everyone is going to want to see is the reunion of those two characters, the question is when will that be?

The episode ends on a huge cliffhanger with, as mentioned before, Agent Hartley dead while Hunter is still alive and Creel gets away with the Obelisk. I’m really curious to find out what Hydra needs it for and it makes me wonder if we will be seeing a lot of 0-8-4′ this season. We get a pretty cool post-credits scene where we once again meet Daniel Whitehall also known as The Kraken in the Marvel Comics.

He is totally that guy you saw in the flashback and somehow he is in the present and still looks the same. My theory is that he is under the Infinity Formula which is something that in the comics, Nick Fury uses which slows his aging (it’s not determined yet if MCU’s Fury has taken it). While the concept hasn’t been introduced in the Marvel Cinematic Universe, could this episode be the introduction to it? I would love for that to be the case, but we are only one episode in so I’m sure it will be a while before we learn how he is in the present. I liked Reed Diamond as Whitehall and it will be fun to see what he will do with the character.

Overall, “Shadows” was an excellent season premiere that gave us a great taste of Agents of SHIELD 2.0. as it has so many new layers and potentials. I like the expanded cast and it will be interesting to see what other Marvel characters will be introduced on the show this season. Season 2 is off to a great start and we will be there to see it every week!