Home
Television
A Battlestar Galactica Remake is Apparently in Development 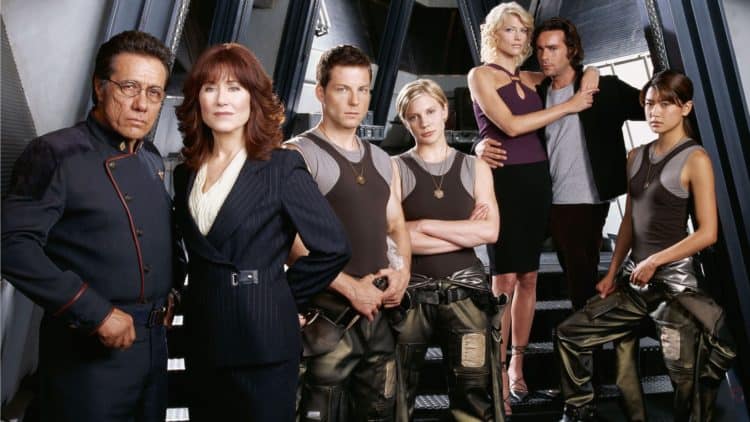 Initially thinking that the next remake of Battlestar Galactica won’t be taking after the original story would normally be enough to elicit a response from longtime fans that would be anything but favorable, but the explanation behind it is good enough to warrant a sudden pumping of the emotional brakes since as executive producer Ron Esmail says as per Lesley Goldberg of The Hollywood Reporter:

“BSG fans, this will NOT be a remake of the amazing series @RonDMoore launched because … why mess with perfection? Instead, we’ll explore a new story within the mythology while staying true to the spirit of Battlestar. So say we all!”

That ought to be enough to cool the jets of a few people since paying homage to the 2004 version and even the original BG in this manner is easily a way to placate and calm the masses that grew up having this show around. While the 2004 version definitely took off in different directions that people weren’t fully expecting it was still embraced in a big way by the fans that made it a desired commodity that became an eventual addition to the scifi ranks that people were eager to defend and see more of. The show only received four seasons when it was taken off the air in 2009 but it did come back in 2012 for Battlestar Galactica: Blood and Chrome, which served as a prequel to the series.

The show will be coming to NBC’s upcoming Peacock service, a streaming network that will be launching this coming April, adding one more name to the streaming wars that are still in full swing. Whether people are going to take note of this or not is hard to say since with the number of streaming services already out there and those that are still to come the number of choices are becoming quite numerous and the interest in so many different shows is pulling people in many directions at once. So far the one thing that many of the networks have in common is that they’re looking to reboots, remakes, and continuations to help them stay afloat, and while some might have the right formula and ideas to keep people coming back, the idea that using an idea that’s already been explored might backfire unless BG can really come through and deliver on a new and exciting story that will keep the people gripped and locked in to a new adventure with characters and a story that they can get behind.

The old show had that quality if anyone remembers since it had a story line that some might have called cheesy and even kind of lame in some regards, but it was still designed in a way that was easy to follow and wasn’t bound to preach to the people or delve into issues that we hear on an every day basis and are growing tired of. Shows that preach and continue to push subjects that are a part of everyday life are beginning to face at least a little backlash in response to their need to remind us just what issues we should pay attention to and why we should continue to care. BG was great since it never did much of this and if it’s wise it will stick to the overall story, which has been great when taken in context really, and should be able to maintain that status moving forward if the story is what’s seen as important, not the messages that can be buried within it.

We live in a time as of now when the fog created by remakes, reboots, and continuous sequels that roll on and on without any end it would appear are beginning to drown any thought originality and creativity that still remains, though there’s always a spark here and there among them that proves that it’s hiding, not dead. BG has for a long time been one of the many shows that people have followed since it does show a great deal of creativity and a great story that’s been easy enough to follow. Fans have held on to this show for decades now and have kept up with it on a continual basis solely because it is so great. In fact it’s kind of saddening, as well as inspiring, to think that a lot of fans held onto the idea of the show when it was relegated to old reruns for so long before it was finally brought back to TV. It’s amazing really because the original show only lasted for one season before being canceled, and somehow it just kept coming back and coming back thanks to the fans. In a way the fans are the ones to thank for keeping it around since otherwise it might have been lost to archives by now.