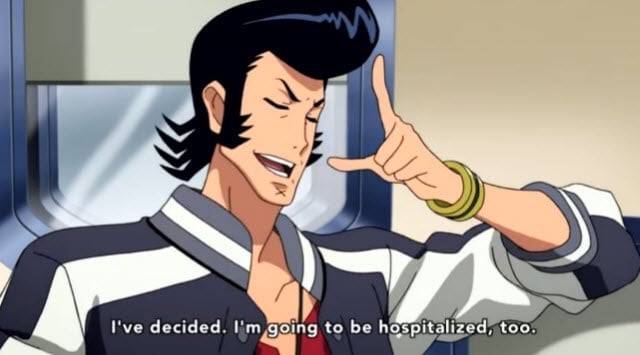 I like Adult Swim, because Adult Swim is insane. They are the shows you watch when you have finally grown tired of the stale and formulaic television that is so commonplace on network TV. What you get, instead, is a cornucopia of shows that throw things at you that make no sense, but if you have a sense of humor, at least make you laugh. While there are truly some underrated gems on that network (two of which I will mention below), some of them are clearly just insane to be insane, which is okay, too. Sometimes we all just need to lose our minds a little. Here are 5 Adult Swim shows that defy explanation.

I am not even sure if that is the title of this show anymore or if that is just someone trolling someone who is trolling someone. But you know the show I am talking about. The one with the talking meatwad and the far more sensible french fry, who live together? See what I mean, defy explanation. Even though I own three of the seasons on DVD, I cannot begin to tell you what it is about.

It is downright funny, though.

This was one of those hidden gems I was talking about. I have mentioned it before here, but have only touched on it. Hosted by comedian Eric Andre, any talk show that begins with the host trashing his own set you know is going to be a little insane. So what about it defies explanation?

Half the guests they announce end up not being that person, and the famous ones do show up are clearly angry or unsure of what is going on around them. Look up the Jay-Z interview to see what I am talking about.

So this show is a cartoon that is a cross between Willy Wonka and a bad acid trip. A show about a literal super jail where the worst of the worst inhabit, Superjail is jarringly violent, often disturbing, and you walk away from it feeling like you have been curb stomped in the brain.

That being said, it is absolute blast of a ride, but buckle up before you take it.

You can kind of explain this show, as it is the other under rated gem I talked about earlier. On the surface, it just looks like a kooky anime series that was overdubbed for America. What you come to find out is it is one of the most outlandish and hilarious shows on the network. Think James Bond meets Leisure Suit Larry in space, and you have a solid idea.

If you don’t know who Leisure Suit Larry is, you probably won’t enjoy the show (<inaccurate generalization that is more of a joke).

Lucy: Daughter of the Devil

So Lucy is sort of the daughter of the Devil, but she is not nearly as evil as her Dad, and had no idea in all of this. Now, there are some insane priests (with one well known voice actor I wont ruin here) who are hunting down the Antichrist(who is Lucy, by the way), but Lucy is really just a girl trying to live her life.

Also, Jesus is an ill hipster DJ. See what I mean. defies explanation.

So there you have it. Five Adult Swims shows that defy explanation, which I went in to explain, therefore disproving the title by the end of the article.