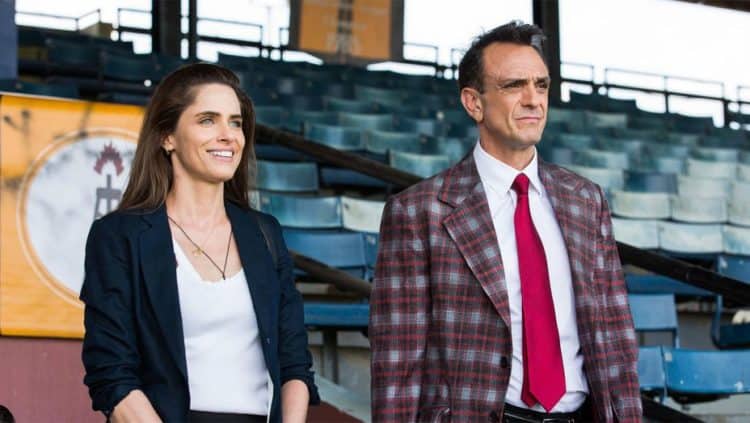 Brockmire on IFC is something that you might enjoy if you like baseball and enjoy a good deal of drama that goes on behind the scenes. But then if you like Hank Azaria then it might be a good idea to take a look as well. Amanda Peet is a part of the cast as well so you can honestly see right from the get that it could be something special to get into since just these two actors have managed to show people something special just about every time they come on screen. In this show the whole idea is to show the story of the titular character and what he’s going through when his life is suddenly disrupted and he has to deal with the idea of losing his job and the world that he thought was secure. While its touted as a comedy, for a good reason, it also has a good deal of drama to it as well, creating a nice balance.

10. The show is based on a sketch that Azaria came up with.

Hank came up with this idea during his time with Funny or Die and it was a simple sketch that he thought up at first, but eventually it became something that began to develop and take on a life of its own. It’s amazing really just how an idea can really come together when someone gives it a voice.

9. Hank created a character that was based upon what he remembers as a child.

Hank was inspired by an actual sports commentator that he listened to as a child. It’s not hard to think that he’s been a fan for a while since there’s enough passion in what he’s doing that one can see just how invested he is.

8. This was Hank’s first baseball show.

With his love of the game and the character he presents it’s kind of hard to see just how this would be his first baseball show, especially since he’s been in films and shows that would make it clear that he would be perfect for such a role.

7. There are a few very well known sports personalities that show up during the show.

It seems kind of par for the course that a sports personality or two would show up for a program like this since it gives the fans a treat and allows a bit more veracity for the show itself. In this manner a show can really create a bit of buzz that others might listen to.

6. The story really gets started after a breakdown by the titular character.

It does start on a low note since Brockmire finds out that his wife has made a fool of him, which prompts an emotional freakout in the middle of his job which then manages to get him into a great deal of trouble. But honestly, this seems like a perfect beginning since it sets the stage for the character.

5. The show has managed to gain positive reviews by critics.

These days a lot of people, too many perhaps, pay a lot of attention to what the critics say and what they tend to like. The fact that they do get it right sometimes though is worth mentioning since with shows like Brockmire they are worth listening to.

If you need to catch up then it’s pretty easy to go back and watch the first couple of seasons so you can know what you’re getting into and what’s going on now. There are so many shows out there these days that keeping up with them all is more than a little difficult, but playing catch-up is actually pretty easy so if you’ve got the time it’s definitely worth it.

This shows a lot of faith in the program to be honest and it would seem to indicate that those in charge think that it will be around for a while to come. With Hank Azaria, a guy that’s been involved with a show like The Simpsons, it’s entirely easy to believe since the guy is quite funny.

It’s okay to laugh these days, honestly. Even with everything on TV that seems like might be mildly to very offensive to anyone that needs to find something to be offended about, Brockmire should be seen as something amusing that might offend in some ways, but is still worth laughing at.

1. The show is set up in actual stadiums.

One more thing that gives it a more authentic feel is that the show is set up in actual stadiums instead of just on a sound set. Believe it or not, fans do appreciate this.

It’d be worth taking a look.