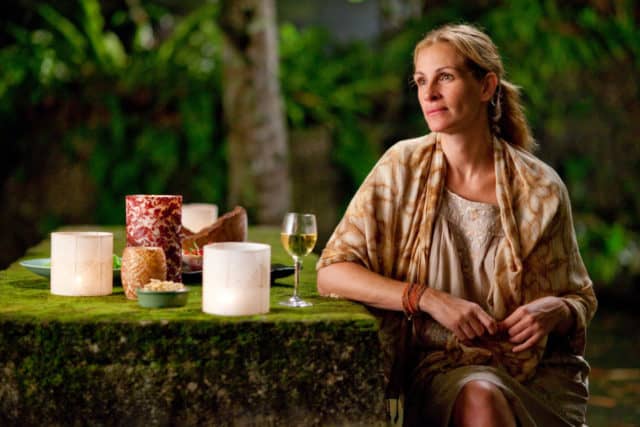 Eat, Pray, Love is a very touching story. Life is never certain, and in fact the only thing that ever stays constant is the fact that it goes on. Playing a woman who thought she had everything until she realized she didn’t, Julia Roberts finds that it’s necessary to take a chance and experience life for once as she goes on a trip around the world to discover herself, finding many interesting locations and just as many interesting people along the way. Her path to self-discovery is something that many people search for their entire lives and fail to find. In this way she finds peace and, surprisingly, she finds true love as well.

The film is rather touching as well as calming.

10. Julia Roberts had a stipulation for shooting in Bali.

She wanted her entire family there with her. This seems like a big request but in Hollywood it’s not even close to being the most outlandish.

9. Javier Bardem and Julia Roberts are the same age.

In the film his character is 15 years older than she is, but in real life they are the same age.

8. Many fans didn’t agree with Bardem’s casting as a Brazilian.

Bardem is Spanish, and many Brazilians had a big issue with his Portuguese accent since it wasn’t as accurate as it should have been.

7. Julia Roberts says she gained 10 pounds during the Rome scenes.

If she was eating the entire time it would make sense. Being overseas usually makes people want to try the local cuisine as much as possible.

6. The book that inspired the movie was a favorite of Oprah’s.

This is the big reason that Julia Roberts picked it up and decided to run with it as a movie idea.

5. This is the third film that Julia Roberts has done in Rome.

Her other two are Everyone Says I Love You and Ocean’s Twelve.

4. It opened the same week as the Expendables.

There’s not a lot of competition between genres but the overall box office numbers can be vastly different since both films were very anticipated.

3. There are three Oscar winners in the cast.

Julia Roberts, Javier Bardem, and Viola Davis were all in this movie. That’s a rather star-studded cast right there that people expected a lot out of.

2. The director that was invited to oversee the movie declined.

He was invited personally by Julia Roberts but declined since he didn’t want to shoot anything that forced him to go overseas. A suitable replacement was eventually found.

1. This movie is one of her biggest box office openings.

At some point in life everyone wants to go off and find themselves in an effort to find some semblance of peace. This film is all about learning how to center oneself and find that sense of calm that we otherwise ignore and find it almost impossible to find. Julia Roberts has shown that she has the talent to make nearly any role a masterpiece and managed to bring something very special to the screen in this case.