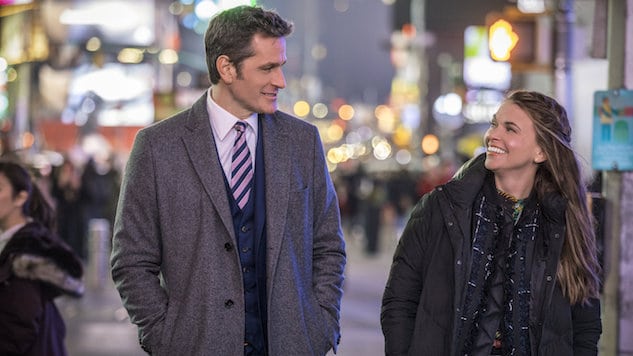 Pause, turn around, and rewind if you haven’t yet seen Younger’s fifth season premiere, because Younger just delivered the biggest OMG moment of the series. Even better, it comes just as Younger is jumping into the #MeToo movement with both feet, and this is one show you can’t say is jumping on the bandwagon. For all intents and purposes, Younger has been riding on the bandwagon since Day 1. They’re just doing it their way, with a lot of drama.

Skeevy remarks from a perverted old man do not get the same reactions that they did a year ago. Not that it has ever been acceptable, but now women have a voice to publicly and quickly say that sexual harassment is not okay. A year go, Liza found Empirical superstar Edward L.L. Moore’s comments skeevy, but not over the line. Until she added them up with all of the other comments from the women forced to don bikinis at his book events. It’s just more evidence to fuel mounting online allegations against Moore, forcing Charles to indefinitely postpone Moore’s spinoff series. It’s a victory for the movement, but Empirical is going to have to do some serious PR work to get through this fire.

This season opener is not all about sexual harassment and potentially inappropriate relationships. Season 5 is doing a deep dive into the corporate politics behind women in power. Because, while the show is made up of some pretty strong women, it’s also a study into how they have to navigate their positions among very powerful men. No one knows this better than Diana, who has spent her whole career dealing with “business as usual.” Now that concept is intolerable. That’s not to mention the fact that all of this ties into the original premise of the show. If ageism wasn’t a thing, particularly towards women in the workforce, Younger wouldn’t have such a strong premise as it does.

Though we love Kelsey, and hate anything that remotely sets her back, Charles Michael Davis is a tremendous addition to the cast. Kelsey doesn’t need another man telling her what to do, but she does need someone who challenges her. Zane does that on a professional and personal level. He certainly looks dinged when Pauline’s book replaces Moore’s in Empirical’s Times Square advertisement, thereby giving Millennial, and Kelsey, the upper hand. But does that mean she needs to play the game in her personal life as well?

Kelsey is flying by the end of the episode, but Liza’s future crumbles quickly without her knowledge. Edward L.L. Moore was not going down without a fight. He has all kinds of excuses for his behavior, but in the end, pulls out his ace. One quick background check on Liza, and Charles knows everything. Repeat: CHARLES KNOWS.

Best Line of The Episode: “Over time, my experience surpassed my looks. Rising skills, falling breasts. Am I right?”-Diana

What will Charles do now that he finally knows Liza’s secret?