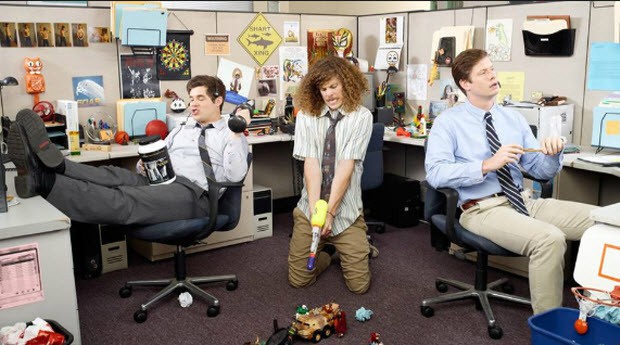 Oh Workaholics, this season was going extremely well and had so many great episodes. I thought that for sure that the finale would be something special; but sadly, I was mistaken. This season the solid episodes were amazing but the lackluster ones always seemed to have plenty of potential that just never panned out. Last night’s finale, “Friendship Anniversary,” was exactly that — an episode that seemed like it would be a total winner but fell flat with disappointment. The episode definitely had its moments, as they all do, but after the conflict arises we are left with over half of the episode being boring and pretty unfunny. There will always be bad episodes within a TV series, but it always stinks when a season finale is just subpar.

The episode started off with a solid opening where the guys have constructed a makeshift home American Gladiator course. Adam was set up as the challenger, Blake the gladiator, and Ders the referee. This is great, exactly what I would expect from three bored guys hanging out. When the round starts Blake hits Adam with the first tennis ball, technically making him out, yet he still runs the course anyway (even being knocked out another two times) claiming he has a “second life.” Ders stops playing to get the mail and it turns out the guys have lived together for 7 years which means they are technically “common law married”. They decide to have a nice dinner to celebrate the re-signing of their lease, but of course, everything falls apart. Blake makes Adam and Ders wedding gifts which are really their previously owned items with seashells or macaroni now glued onto them, which of course they absolutely hate.  Then Ders explains they are having a traditional Norwegian dinner with kjÃ¸ttkaker (I think?), fiskesuppe, and cod tongue. Yum. They hate the meal and turn the constant arguing into a massive food fight filled with verbal abuse towards one another until they all can’t take it and say they are leaving. This is where I thought things started to dry out a little.

So the guys split up because they think they will each be better off, but clearly that won’t be true. Blake goes to stay with Jillian, Ders drives his car to the park and sleeps there, while Adam decides to just hit up the bar and find some new friends. However, all of these turn out to be miserable and leave the guys really missing one another. Jillian’s house smells like Indian food and she turns out to be a total dictator and ends up making Blake sleep in the bathtub because he decorated her favorite dress with macaroni, Ders encounters some loud teens that use the park after hours to drink and smoke underage and end up tipping him over in a port-o-potty (gross!) when he tells them they have to leave, and Adam gets picked up at the bar by a gay guy and heads home with him not realizing the man’s sexual orientation. They all realize that there is no place like home yet still refuse to admit they miss one another. They even divide their TAC cubical and try to brag to Alice about how better off they are and how great of nights they each had.

Eventually, they decide to head back to the house and divide up their things so they can move on but their place has been overrun by rats scavenging all of the food scraps from their fight. I thought that this was where the episode picked back up and got really funny. The guys gear up with makeshift armor and weapons and tear through the house destroying all of the rats. The guys go wild and are brutally smashing and destroying the rats, which was surprisingly bloody, and probably what I thought to be the funniest part of the night. The situation was handled exactly how I would expect with some radical ridiculousness. They discover an entire rat nest in the basement but devise a plan that brings them back together by being a team effort. Ders gets everyone to focus, Blake comes up with the crazy but creative plan, and Adam is “loco” enough to actually do whatever they come up with. Adam puts on the pizza suit that Blake designed but comes out covered in rats, screaming and in total fear for his life, which ends up causing him to admit to missing Blake and Ders and gets them to apologize too. Of course, they realize that this won’t be their last adventure together and reconcile, at least until they all die of rabies.

When Workaholics is successful, they bring forth some of the funniest TV episodes I’ve seen; but unfortunately, this makes their average episodes look worse than they truly are. I don’t think this finale was horrible, but it’s definitely disappointing to see the potential for greatness be right there and never happen. Overall, I thought that the episode set up well but got super boring when they split apart. There were still funny moments, but they definitely missed the opportunity to have me, once again, dying with laughter.

– “I’m not eating any Swedish fish, unless it’s actual Swedish Fish; the kind that you get in the bag at the grocery store.” I have to side with Adam on this one, I’d only want candy Swedish Fish too.

– Adam would be friends with Macklemore and Ryan Lewis if he wasn’t wasting his time with Blake and Ders.

– Jillian REALLY likes to bet on dog shows. It’s a shame she put $400 on the Schnauzer to win it all.

– “Anders the Giant, and Adam, you’re my Spice World.”

Did you think that “Friendship Anniversary” was an acceptable way to finish out the season? Let me know why you did or didn’t like it in the comments!