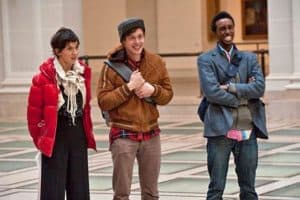 Ladies and gentlemen, I am in shock. Pure shock.

Work of Art‘s first season finale really blew me away. The twist was the reality show equivalent of a LOST cliffhanger, and I had to pick my jaw up off the floor before coming over to my computer to write this review.

Miles Mendenhall is not the “next great artist.” The judge favorite was ultimately given third place for his exhibition, which was inspired but not fully realized. Third. Place. Miles was my favorite for the series, and I was really disappointed to see that he didn’t get as far as it had seemed he would. After thinking on it, though, it did sort of make sense; he didn’t show much evolution over the course of the series, and his sudden change of method ultimately was his downfall. And, as I’m generally unused to watching reality television, I’m coming to terms that it’s probably the last time we’ll get to see Miles and his crazy installation art. He was a great character and artist, and I wish he could have taken home the top prize.

Second place was Peregrine, whose art I found the most disappointing. It was all very thematic; the exhibition was really just a big carnival that was way too overdone. In fact, the only piece I really loved was the deer fawn portrait that was really deeply moving. As the judges (including guest judge Dave LaChappelle, not to be confused with the host of Chapelle’s Show) noted, Peregrine’s work ultimately felt overcrowded, and could have used a bit of minimalism. I personally think Miles should have placed over her, but maybe that’s me playing favoritism toward my season-long favorite.

If anyone deserved to win more than Miles, it was certainly Abdi. And, guess what? He did! Two weeks ago, I would have told you that Abdi wouldn’t have cracked the top three in the competition. Not because I didn’t like him — he was one of my favorites — but because his work was ultimately just not cutting it. His misguided painting of Plato’s cave was technically good, but didn’t make much sense for his theme of “chaos.” He was floundering.

And then, he went on a nature walk, and everything got better. Abdi began creating some of the best work in his life. Though not without a few errors in execution (such as leaving a sketchbook for people to see and nearly breaking the hand off one of his statues), Abdi ultimately created a sweeping ode to hidden humanity that really showed his evolution as an artist. Though his comic-bookish paintings of the earlier part of the season were good, his late-term change into a more serious artist really pushed him forward, even though I was sure he would take third place. It seems he and Miles really swapped places in my bracket.

It’s also interesting to note that Abdi is the youngest contestant of the original fourteen, at 22 years old. Miles was the second-youngest, at 23, while Peregrine was nine years older than that at 32. But the presence of Miles and Abdi in the top three begs the question: was Work of Art age-biased? I’m not saying that in the sense that the judges picked Abdi because he was the youngest, but perhaps that the entire competition was better fitted for a younger generation than an older one. How that affects next year’s casting will be very interesting.

Am I satisfied with the outcome? I suppose you could say I am. Wikipedia is already qualifying Miles and Peregrine as having tied, so that lends a little bit of petty satisfaction to my cause. Abdi’s win is certainly welcome, and he certainly had the biggest story over the course of the season. In fact, I’m surprised I didn’t see this upset coming sooner.

From the casting segment at the end of the episode, it seems that Work of Art is on the conveyer belt for a season two. I already can’t wait to see what a brilliant new cast they find next time around.