Home
Television
Why We’ll Be Watching “The Pole” on Syfy 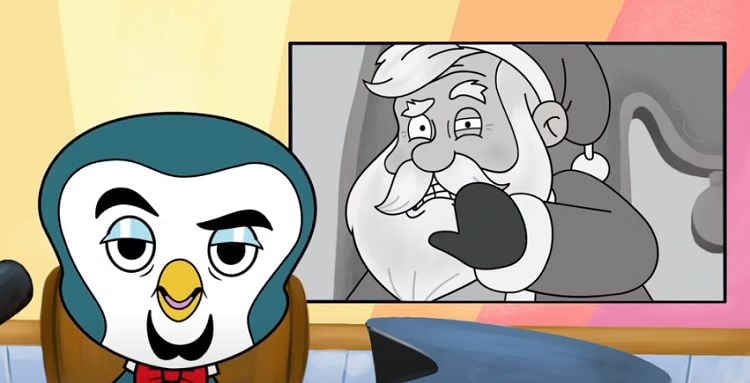 Just watching the preview for The Pole makes one wonder if this is someone trying to be funny and purposefully offend the over-sensitive crowd or if it’s the over-sensitive crowd firing back at those that are fully ready to defend animated characters that take things too far, whatever that might mean. In the process, it simply becomes something so insanely funny that one can easily imagine the offended and the offensive putting aside their differences to laugh uproariously at the resulting mess since this does look pretty funny, and “The Pole” is a rather apt name when seeing how the preview starts out. One cultural aspect that hasn’t been immune from the back and forth that people have been engaged in over the years is Santa Claus, and in fact, the jolly old fat guy hasn’t been immune to this kind of portrayal for a long time now, since everyone from commercial companies to Larry Flynt has used Santa’s likeness for their own purposes. But it does appear that The Pole is a lot more Flynt-esque than anything else given that we’re hearing them talk about pubes and a pixelated shot of the big guy’s dingaling. Yeah, you read that right, for some reason Santa was getting a bit naughty around the cookie tray, which obviously didn’t sit well with Mrs. Claus since one would have wonder why Santa would feel the need to do such a thing.

Santa’s have been seen in a number of ways over the years, as some of the most controversial showings have been movies such as Bad Santa and The Fatman, which came out just last Christmas season, so it’s nothing new to see Santa being naughty and definitely controversial. But the thing about this is that it gets balanced out by so many other wholesome versions of Santa Claus that it’s not such a big deal. That’s why a parody of Santa isn’t too hard to take, since like everything else he gets to be made fun of from time to time, and it turns out to be hilarious since a lot of people simply can’t see such a wholesome character acting like this. But from the looks of it, this Santa has been this way for a while and isn’t really into being the jolly old elf unless he’s high as a kite. It’s easy to embrace one of the ideas that are continually pushed with every new version of Santa, and that’s the fact that it’s not easy to be the big guy since apparently a lot of his year is spent ramping up to Christmas, at which time he has to travel the world delivering presents and hoping that he manages to get everyone what they want, and what they need. As it’s been shown, those that either don’t want to believe in him after being disappointed, and those that simply grow up and stop believing, make the job a little tougher since Santa kind of needs people to believe in him, or things go belly up after a while.

Would that lead Santa to snort blow and whip it out every now and then when in someone else’s house? That’s hard to say, but it feels as though there’s more of an explanation there than the preview grants, which means that it could get even funnier to be fair. But it’s bound to be a laugh riot anyway since just about any parody of Santa Claus is usually done with a great amount of humor that people can’t help but enjoy since it tells us that even some of the most wholesome aspects of life can be made into the same type of entertainment that people have been enjoying for years now. It’s fun to laugh at things like spoof comedy since they take just about every aspect of life and make it humorous, even if there are people out there that have a stick-up a certain orifice that prevents them from laughing too hard. Being able to make fun of just about anything and everything is the sign of a healthy sense of humor, since even the dark type of humor is healthy in its own way, as it allows for the imagination and the critical thinking skills that people need to be able to survive in a world that is both accepting and cynical, as well as caring and brutal. If a person can’t laugh at spoof comedy or at least admit that it makes some kind of sense then their funny bone isn’t just broken, it was likely never fully developed.

So yeah, it will be a lot of fun to watch this one, and even more, fun to see how people react to it when it does come out. Admit it, the show looks pretty funny.