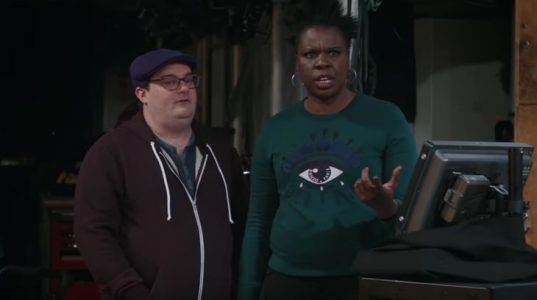 Sarah Nathan of Page Six is just one among many that has latched onto the now popular subject of Leslie Jones leaving SNL. A lot of people are still wondering if this is the right time for her to leave or if she still had more to give, but quite honestly how a person feels about this really has more to do with how they feel about her than anything. If you missed the bus on just why some people don’t like her you might have missed the whole issue that cropped up when Ghostbusters 3 was announced, and Jones’ reaction to it. Ironically she was quite vocal when it came to calling out the idea that the third movie would have no connection to the 2016 movie that she starred in with Kate McKinnon, Kristen Wiig, and Melissa McCarthy. What’s funny about this is that when people, die hard fans in truth that had enjoyed the original movies, tried to make their voices be heard when it was established that the 2016 movie had no connection to the previous movies, no one cared. For some reason Jones didn’t seem to take that into account, and as childish as it is to go tit for tat on a matter such as this, the fact that Ghostbusters bombed in 2016 was in a big way the comeuppance that the fans were hoping for.

Now with her leaving SNL it would seem that some fans are waving a fond farewell and hoping that she’ll be able to excel outside of SNL. Some however might be kind of indifferent for their own reasons. Let’s be fair, she’s funny and she does have more than one setting when it comes to comedy, but the act she left on the big screen in Ghostbusters was something that a lot of us aren’t soon to forget no matter how much we want to. Away from Ghostbusters she’s been great, but as Amy Kaufman of the Los Angeles Times reminds us her time with the movie left a mark on her since Twitter fans exploded when it came to the movie being remade, and some of the responses were absolutely horrible. A return to SNL was definitely what was needed since this where she was able to shine and do her thing while being accepted as a comedian and a talented artist. As she moves on with her career however she does have a couple of movies that she’ll be starring in, one of them being Coming 2 America, the sequel to the Eddie Murphy hit from decades ago. She’ll also be performing her own standup show that will allow her to entertain the people as so many comedians are doing on streaming networks these days.

My own personal feelings about Leslie Jones is that she’s a gifted comedian, even if she’s a little rough around the edges at times. That’s her persona however, it’s her gimmick and the kind of charm that she brings to the table. I’ll be honest and admit that I was one among many that didn’t care for the Ghostbusters remake overall. There were definite moments when it managed to shine and when the actresses did a pretty decent job. But if you want the honest truth, Leslie didn’t inspire a lot of faith in the movie since she became more of a stereotype and less of a real character. It’s an argument that a lot of people might find nonsensical, but Winston was a much better addition to the original team than Patty since while both of them were part of their respective teams, Winston added a great deal more to the group by being a hardworking, moderately intelligent man that was also level-headed and was driven to do his best. Some like Tanya D of Polygon however just want to focus on the fact that neither Winston or Patty were scientists while being paired with three very technical-minded individuals. I kind of wonder if she remembers that in the remake Wiig’s character was essentially more hopeless than Patty when it came time to fight, while the original team was pretty tight after a while despite Winston not being a scientist? Patty was a caricature at best, a throwback to what people have been used to seeing in the past, and not really an integral part of the group no matter how hard one wants to argue the point. But away from the movie? Away from the movie she’s great, and has quite the solid routine. That’s a big reason why she was so great on SNL and why she definitely earned her nominations.

Now moving on it’s going to be interesting to see how she adapts to the big screen again, outside of a voice role of course, and with talented and seasoned actors around her. My own personal feelings aside, Leslie does have the talent and the skill, as well as the experience and composure, that it takes to succeed in show business. And it’s likely that she did leave SNL at the right time since if she’d stayed too long she might have found herself struggling to leave at some point as a few comedians did in the past. Now that she’s off the show there’s nothing to say that she won’t come back a time or two to host since she’s still highly regarded, but it’s time to get used to seeing Leslie on her own as of now, and the future seems pretty bright at this moment.