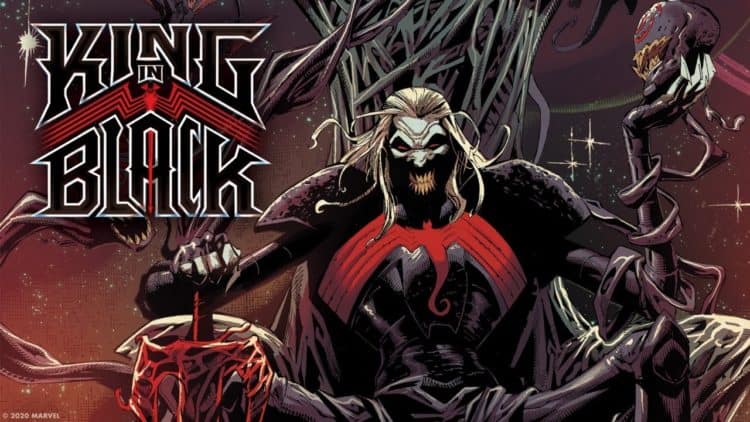 It would take a person a while to read the entire King in Black event since it includes quite a few heroes and villains, but it’s worth the effort simply because it’s an event that could be worked up to if the MCU was feeling extremely ambitious again, and if Sony was willing to work together on a story that could see a large number of characters brought into the mix. Putting it as simple as it can be, the Marvel universe, or at least a good part of it, is ripped apart when the dark god Knull makes his way to earth to tear things up in an effort to get his hands on Venom, and on pretty much anything else he can. The fact that his power comes in a large part from a dead celestial would be one reason why this story would be something that many people would be willing to see, especially since the mention of or possibly sight of the celestials will be seen in The Eternals when it comes out, and the awesome power that the celestials hold is something that will have huge ramifications for the MCU when it’s fully understood. But think of a creature that is able to create more symbionts like Venom at will, and has the power of a being that has the ability to create, alter, and end life fueling him. That’s the kind of even that a lot of folks might want to see the MCU jumping at since it would encapsulate the entire range of heroes and villains the world over since the symbiotes are nothing to mess around with, but when encountered in numbers the danger they represent grows exponentially. Add to that the fact that this story deals with dragon symbiotes and even sees some of the most powerful and influential heroes and villains taken over by symbiotes, and it’s something that might make fans salivate just to think about.

This type of a project would require a lot of careful planning and a multitude of special effects, and it’s not even certain who would be cast for several roles if in fact the MCU did take it on and decided to fill the event with as many big names as it could. Given the fact that the Infinity Saga was initially a widespread event in the Marvel universe, and what we were given was impressive but not quite as expansive, it’s kind of safe to say that a King in Black event might be the same largely because of the costs involved, the logistics and because the overload of characters would be utterly insane. But then again, if it were made into a series it might actually be able to go somewhere and last for a season or two, or three depending on how faithful the event was kept in terms of who showed up, how many locations were used, and what kind of special effects were called into play. The mere fact that it involves more than a few dragon-like creatures and even Fin Fang Foom would make it possible to think that the series would need to be something that Disney and Sony would work on together in a crossover effort that would be nothing short of epic. But giving it to Sony on the grounds that Venom is one of the crucial characters feels like it would be a waste, and it’s likely that the Mouse House wouldn’t do any such thing anyway. This type of event could be a huge chance to push the MCU in a new direction and give the audience another villain that would be even worse than Thanos since Knull isn’t bent on equalizing the universe by eliminating half of it it. He just wants to conquer.

That would definitely simplify things in a big way, but it might also make things a little more complicated since as mentioned this story involves a lot of people, and in order to really get people on board with the idea it might be better to see it as a series instead of a full-on movie. The reasoning behind this would be to push the idea that expanding the MCU in a big way is more than just idle talk. While the coronavirus stalled a lot of production when it came to entertainment, it does feel as though the question on everyone’s mind is what the MCU is going to do next in order to stay competitive and avoid being thought of as the idea that led the way and then ran out of gas after its first big collaboration. A lot of people would argue that this isn’t even close to being true, but it’s kind of time to put up and wow the people again, and leading up to a series like this might do it.