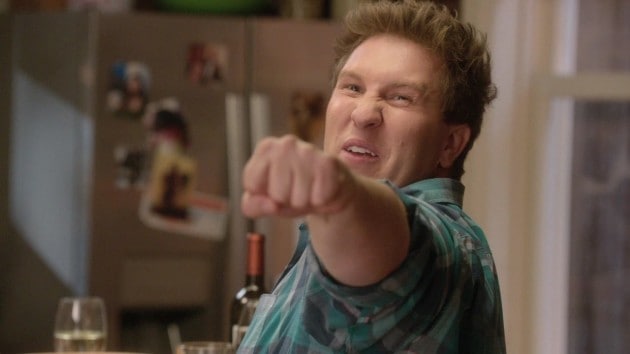 After a promising (if little-watched) start, Weird Loners grew less and less serious during its brief life, creating an interesting, though disappointing, contrast between the season’s two halves. After hitting an emotional high point in “Weirded Out,” the show has spent two of the last three episodes backing away from the darker edges it displayed earlier in its run, ending with this week’s “We’re Here. We’re Weird, Get Used To It.” It’s a half hour that feels more like a mid-season filler episode than a well-developed finale.

I’m sure the writing was on the wall when only six episode of the series were ordered, but it’s still a little disheartening to see Weird Loners come to such a listless end. Zara’s lesbian bar initially appeared to hold the potential of something like Parks and Recreation‘s “The Fight” – and yet, it devolves into Caryn being OCD about potentially being a lesbian, while Zara prances Eric around in her darts league, telling everyone he’s a lesbian so she can win some title. The framework for interesting conflicts are there; had Weird Loners taken Caryn’s experimental phase as a true piece of character development, rather than a piece of elaborate farce to be played on a woman stuck between her and Stosh, maybe “We’re Here” could’ve existed as something more than an episode full of trite jokes and a slapped-together ending where everyone gets laid (except Eric, because he brings home a lesbian).

Maybe my expectations were too high for the finale of this series, but its first three episodes displayed so much potential as a show about healing and exploration of self. Weird Loners presented a pilot with a group of characters recovering from traumatic life events, searching for self-definition; the last episode isn’t only missing these tenants, but appears to lack any sort of ambition towards anything, satisfied with giving its small audience such a laughless final look at the endearing crew of immature misfits.

And then it tacks on a cheap, unearned ending: Stosh and Caryn’s competition leads them to sleep with each other, an ending that might as well have included a visual “cue the eyeroll” cue with how obvious it’s telegraphed, and how goofily it’s executed. There’s a way to make a tacked-on leap for emotional closure work, even on a six-episode show (go watch Bent if you don’t believe me… totally worth the $2 an episode), but instead of staying true to its pathos or its characters, Weird Loners decides to just have fun, which would be a fine, if it offered anything in the way of entertainment with its central pair of farces.

Yet, even as a “hangout” kind of episode – which ultimately, “We’re Here” doesn’t want to be, given its ending – the finale doesn’t do anything to bring the ensemble to life, content with simplistic jokes about Caryn not really being gay, Stosh being a jerk, and Eric being gullible to drive what barebones story the episode contains. It’s certainly not a satisfying final half hour with this group of weird loners – there’s really nothing weird or lonely (or funny) about this episode at all, which unfortunately brings the promising young show to a disappointing end (and without a single Polish joke, which might be the most disappointing part of all). We never got a chance to get used to thee, Weird Loners – and while I’m sad I didn’t get to see more of these intriguing characters, the tone of the last few episodes suggests this might’ve been for the best.