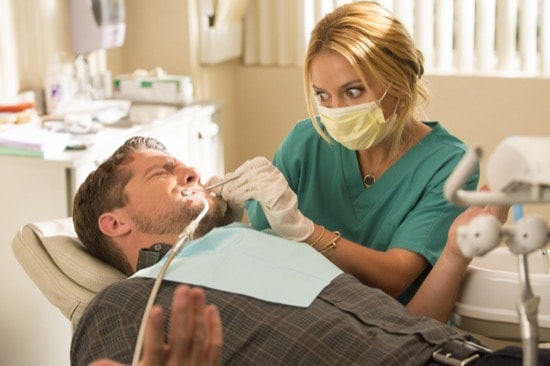 On most comedies, a character like Eric Lewandowski would be the foil: he’s naive and infantile, easy qualities to attach easy humor to. However, when shows do this, they run the risk of either treating a character like a gimmick (many of New Girl‘s Schmidt-centric flashbacks), or reducing them to a pathetic punch line that becomes irredeemable at some point (a great example of this is late-season episodes of Cheers about Norm).”Weirded Out,” which marks the halfway point of what may be Weird Loners’ only season, presents a strong case as to why Weird Loners is a different kind of self-rehabilitation comedy: Eric isn’t the foil, he’s the beating heart of the show.

The superficial story of “Weirded Out” is basically ‘Stosh is a slimy jerk’: however, it’s important for Weird Loners to push forward the very worst of Stosh’s qualities. It’s really the only way they could organically introduce conflict between him and Eric, who idolizes his cousin to no end, hanging onto his every word and phrase. And that conflict is the foundation of the episode, one that takes Eric’s feelings of betrayal surprisingly seriously, however saccharine Stosh’s “therapy” sessions to explain his behavior may seem to be in the moment (it’s a great montage, but only further highlights Stosh’s less than desirable qualities, laying it on a little thicker than necessary). At its heart, Weird Loners is a show about people covering up for their own perceived inadequacies, and when it channels those stories through Eric, it brings out the endearing qualities underneath the inherent ugliness of each character’s premise.

Without Eric, Weird Loners could become a bitter affair: though Zara’s free-spirited nature provides some opportunity for lightness around the edges of Stosh and Caryn’s notably darker stories, her character isn’t as developed as Eric, her interactions with the group mostly ways to fill gaps in between more important scenes (though she is the catalyst for the most important conversation of the episode, a small sign of hope for the brief future of the show). So it’s really up to Eric to be the most hopeful character on Weird Loners, and instead of treating that optimism with the bitterness Caryn and Eric both display in the show’s first three episodes, the series presents that innocence as something sacred, something Eric and company should work to protect, rather than try to shatter with some illusion of helping him mature and enter the real world.

In that sense, Eric’s character is closer to something like Abed Nadir on Community: he’s a place where the show can glean quick, great jokes from, but he also works to frame the insecurities and personal issues that form the dramatic arcs of other main characters on the show. And Weird Loners, like Community, doesn’t force the issue of Eric trying to change his life in drastic ways: he’s the most ‘pure’ character of the show, an integrity Weird Loners and Community alike view as something to protect, not trivialize and present as something childish to get rid of. There aren’t many shows that can have their cake and eat it to, in that kind of fashion. The fact Weird Loners is doing it in its third episode is a pretty striking feature for the young show.

Of course, “Weirded Out” can only do this by marginalizing most of the other characters on the show. Though there’s some great comedy shared between Caryn and Eric in their “therapy scenes,” their interactions are mostly disconnected from the rest of the episode, with everyone mostly focused on the enigma that is Stosh, bringing a level of honesty to his character we couldn’t get directly. It works in service of the other story, but doesn’t do a lot to add to the characters of Zara and Caryn, the lone disappointing aspect of the episode (jokes about Caryn paying too much for therapy only makes her character seem desperate, something that’s not needed for her).

The final scene of “Weirded Out” is really the episode’s savior: from the framing of Eric and Stosh in the little toll booth to the closing tag of his employees playing the loudest version of Telephone ever (and quite badly, I might add), this episode of Weird Loners really benefits from how well its final scene was written and performed. Eric and Stosh hugging out brings the episode to a predictable, logical conclusion, yes – but again, it’s how the episode uses Eric’s consistent character as the bedrock for other characters’ growth that brings everything together. By taking Eric seriously where most shows wouldn’t, Weird Loners has found a winning storytelling formula, a surprising move for a young show that nobody is watching (but really, really should be).