Home
Television
We Still Think the Seinfeld Finale Was Great: Not That there’s Anything Wrong With That 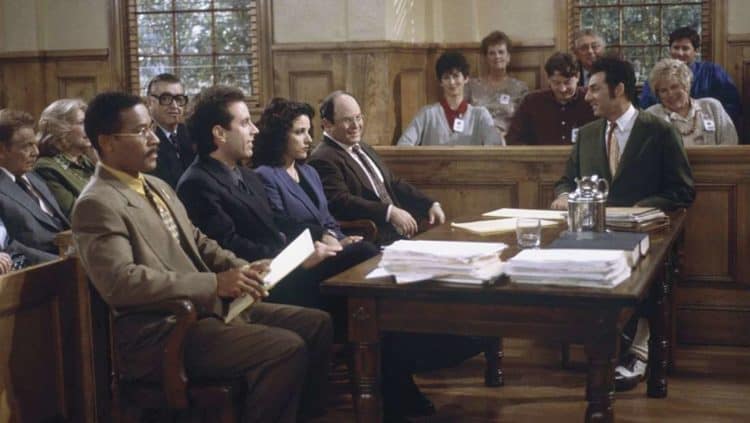 Can anyone believe it’s been since 1998 when Seinfeld experienced a finale that many people thought was completely underwhelming? Seriously, people had a huge issue with the ending and how it turned out since the core group ended up going to jail. That seems like a rather bleak way to end things, right? Jeff Lebrecque of Entertainment Weekly makes that point felt very well, mirroring what a lot of people thought about the episode. It was simply just too much to be believed that a show such as Seinfeld would end on this kind of note since quite honestly it was a loved show and there were a lot, a LOT of people that were pumped to see the finale. The fact that a lot of them felt let down was kind of hard to notice the day after the second part was over and done with.

But hold onto your opinion for a moment and think about how it might have been better than a lot of people actually believed. Ken Tucker of Yahoo! Entertainment brings up a great point that a few others have also brought to light when it comes to explaining just how the group finally got a big dose of karmic justice. While their minor wrongdoing are too numerous to mention there have been a lot of times in the show that the core group have performed acts and done or said things that might have landed a lot of people on the hot seat if not in jail a time or two. The whole idea of a sitcom is to show dramatic and funny moments depending upon what the whole message and purpose of the show is, and Seinfeld was one of the many shows that seemed determined to let its main characters get away with a lot of ills that weren’t thought to be that bad at the time but were still wrong, immoral, or unethical in some fundamental way.

Sam Hockley-Smith from Grantland takes it even further when he goes into detail about how Larry David has had to justify how the show ended for years. Finally David came to the point that he didn’t want to explain it any longer and was simply ready to call any and all thoughts that he might have reunion of the cast a no-go. Can you blame him? So many people threw so much shade at the finale that it quickly became one of the most head-scratching moments in TV history since it didn’t seem to make sense to take the four friends and remove them from society for long enough that people would effectively forget about them in a way. To many people that almost felt like a slap in the face since following the show for so long seemed to make some folks think that they were entitled to a grand and fitting ending. The disappointment was very real, but if you want the honest to goodness truth there was a reason it ended the way it did, and it was almost perfect.

When you look at the show from an objective standpoint Jerry, George, Kramer, and Elaine were not good people unless they were around one another, and even then they were borderline neurotic if not all the way over. They weren’t the best of folks when they had to interact with the world around them and it showed in a big way, as their insecurities and quirks began to come out in a big way to those around them as they attempted to interact and failed quite often. So when you look at things this way it becomes evident that they weren’t the victims of a poor ending, but instead were finally being made to pay the piper so to speak. If you want further proof go on and take a look at the episode and just take a look at the evidence that was heaped against them. Sure it was kind of petty and even eye-popping in its enormity when the prosecution kept rolling in person after another, but it was also a good accounting of how the four had taken a great deal of advantage over other people during the course of the show. It’s not hard to admit that some shows glorify those that do and say awful things and vilify those that act with a moral conscience, but there are times when it’s more than satisfying to realize that despite the fact that they’re the favorites of so many, some characters are finally made to pay for the things they’ve done and said throughout the series.

The hate mail might come flooding in for this one, but the show ended just the way it needed to. Thanks to the way that the four treated people for so long it’s been easy to see how TV karma was the best approach to ending something that had been ongoing for so long.