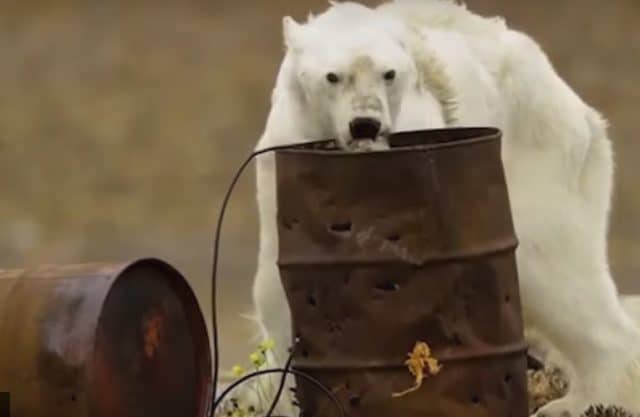 Recently, Paul Nicklen of SeaLegacy captured footage of a starving polar bear, which was in such a bad condition that he thought that it had died before he spotted movement. The resulting footage made for difficult viewing, not just for Nicklen and his team but also to a lot of people from all around the world who saw it through his social media accounts. After all, polar bears are some of the most charismatic megafauna out there, which made the sight of the emaciated creature rooting through a rusted trash can that much more unbearable. Unfortunately, there was nothing that Nicklen and his team could do to help, seeing as how feeding it would have done nothing but draw out its death.

Why Are Polar Bears Under Threat?

The polar bear that Nicklen and his team captured on film is far from being the sole creature of its kind that is under serious threat. This is because a warming planet is causing the ice in their habitat to melt earlier and earlier, which in turn, means less and less time for them to use the ice as a platform for seal hunting. As a result, polar bears are becoming skinnier and skinnier when they are forced to move onto land, which has a negative effect on their physical well-being. Even worse, this is combined with longer and longer summers, thus making their situation that much worse. As a result, it is no wonder that the scientists are expecting a 30 percent fall in the population of polar bears by 2050, meaning that interested individuals should not expect the polar bear captured on film by Nicklen and his team to be the last to starve.

How Can People Help?

There is no simple and straightforward solution to this particular problem, not least because it extends far beyond polar bears. After all, a lot of creatures don’t fare so well when their environments are subjected to sudden and dramatic change, thus putting them at a real risk of either becoming endangered or outright going extinct. In fact, there are a lot of experts who are concerned about how climate change will affect humans, particularly in parts of the world with weaker governments that are less able to weather sudden shocks.

Still, challenges can be overcome so long as people are willing to put in the time and effort needed to do so. Since climate change is being caused by the emissions of greenhouse gases that trap more and more of the light that should be reflected back into space, this means that humans as a whole will have to switch over to ways of doing things that emit fewer greenhouse gases, which will be an expensive, complicated, and time-consuming process. Unfortunately, while there is widespread recognition of the problem, the relevant parties don’t seem to be moving at a fast enough pace, which is rather concerning when the consequences of climate change are happening right now rather than at some nebulous point in the future. Simply put, there is a reason that some people think that the Holocene extinction will be the next major extinction event on the Earth, which is not exactly a happy thought.