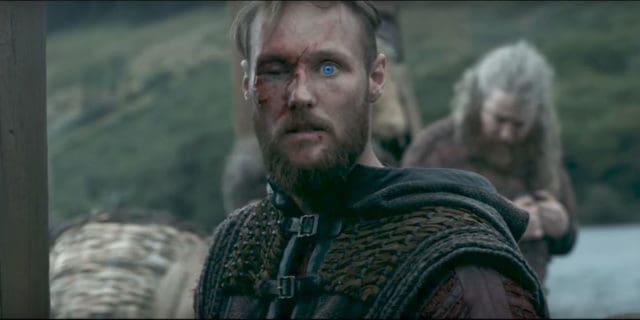 Who else is pumped up for the next season of Vikings? We still have to wait until the end of November but the tension is mounting as the date comes closer and closer. It’s hard to stay patient and wait for this anticipated next season, especially with all that’s supposed to coming.

Aslaug is dead, we know that much already since Lagertha decided that the woman was simply too dangerous to keep alive. Plus, the slight she had offered by destroying her future with Ragnar was something that the shield maiden could not forgive. Now however Ivar the Boneless is bent on revenge, seeing Lagertha as little more than an usurper who killed his mother and nothing else. But Ivar is obviously not one that should be casting stones since he killed his own brother in the final episode of season 4. He buried an ax in Sigurd’s midsection over little more than an old insult that he’d grown far too tired of, proving that he is without a doubt insane, dangerous, and extremely impulsive.

Civil war is on its way to Kattegat, and Ivar will be leading the charge it would seem along with King Harald it would appear, while Lagertha attempts to make a pact with Ubbe, Ivar’s older brother.  Obviously things won’t go all that well from the picture above and the clip below, but victory for either side will not be an easy thing to accomplish.

Bjorn looks to be headed to the Middle East, presumably because of wanderlust but also because he’s never been able to support the division between his brothers and mother.  Bjorn wishes for his people to stand together as one and to travel further than any viking ever has before. He’s done horrible things in the name of vengeance and has also lived his life as well as he can, but his eyes always seem to be on the far horizon, no matter that he will always return home eventually.

Floki, having been troubled for so long and having lost everything he held dear, has taken a ship and gone on his own voyage during this season, perhaps seeking the will of the gods or simply absolution in some manner that he has not yet found. Since season one Floki has been a troubled individual, able to see things that others cannot and somehow divine the workings of the world in a way that makes sense only to him. He will obviously take a voyage of faith in an attempt to find answers, but what fate has in store for him is something that no one could have possibly foreseen. In a land where the worship of the gods is still a very potent thing, Ragnarok is still very real, and the portents of such a thing are easy enough to see if one but looks. When Floki comes upon a smoking mountain that billows its dark clouds into the sky, there’s no telling just what he will think.

Finally, there is a new threat to be worried about. King Ecbert is gone, as is King Aelle. Ecbert’s son Aethelwulf has taken his people away in an attempt to rebuild his kingdom. Now comes a true threat that the vikings will likely never see coming. The Templar order is making their way to prominence, and the world will be changing very quickly.

The battle is about to change in a very big way.