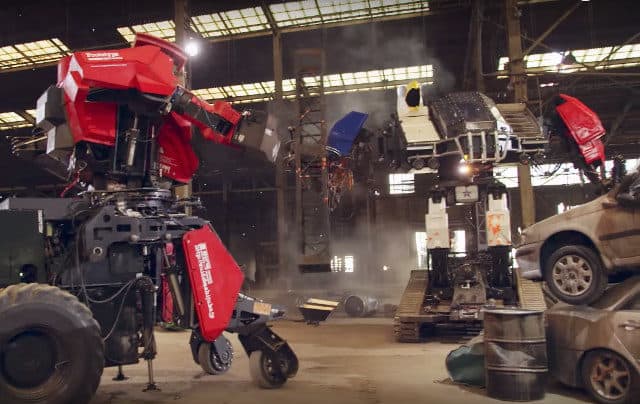 Giant fighting robots. Yeah, that’s what this is all about. And it’s AWESOME! It’s taken a few years to build up to, but finally Japan and America are going to get it on. Iron Glory vs.  Kuratas is bound to be a heavy-hitting, bolt-rattling confrontation that should be pretty even, right?

Iron Glory never stood a chance. Not only did its first shot bust up before it came out of the cannon, Kuratas’ iron fist had no trouble knocking Iron Glory on its metallic butt. Iron Glory went down without much of a fight, but there were two duels that were going to happen, with the Americans putting up another bot in response to seeing how awesome Kuratas was. Of course the Japanese team still wanted to face Iron Glory, as that was the initial challenge, but they were also willing to take on Eagle Prime, the American’s answer to the iron juggernaut that is Kuratas.

The first match showed that the American’s kind of downplayed the durability and speed of their opponent, but that was why Eagle Prime was created in the first place, as they’d seen what Kuratas was about and decided to make something even more impressive. Eagle Prime was bigger if not faster and was working off of an engine that was immensely powerful and could easily hold Kuratas in place during the first round as the American’s cannon first expended its rounds before bashing forcefully into Kuratas’ armor, bending and tearing it apart while looking for a weak spot.

Unfortunately the bots ended up getting stuck together and the round had to be called so they could reconnoiter. The Americans swapped out the cannon for a good old fashioned, four-foot long chainsaw that’s usually used to cut through stone. As the bots came in for another clinch Kuratas started the charge by attempting to blind Prime Eagle with paint balls that were aimed for its cockpit and cameras. This didn’t work however as Prime Eagle forcibly lifted a truss and used it as a shield as it twirled the heavy iron structure in one hand while moving closer. Dropping the truss, Prime Eagle then grabbed Kuratas’ ram-like hand and moved in close, letting its chainsaw go to work as it continued to push Kuratas back.

The action became so intense that the commentators had to move quickly lest they get crushed beneath the falling equipment that crashed to the floor after a badly damaged Kuratas was slammed backward by Prime Eagle. Eventually the ref would blow the horn, signalling that the match was over and that Prime Eagle had won by disabling Kuratas.

Honestly I think this shows a couple of things. Americans don’t like to lose, but they also like to talk way past their capabilities. This usually results in a comeback with something bigger, better, and more amped up than the original could have ever been. That explains why Prime Eagle was so overpowering and why Kuratas was fighting an uphill battle.

Second, underestimating your opponent is never a wise move. The Japanese team knew they were in for a fight, but were pretty modest about it. The Americans on the other hand were notably ready to accept victory and nothing less so it stands to reason that they were kind of hedging their bets with the creation of Prime Eagle. The second fight was awesome, but it shows both American tenacity and our ability to go over the top for just about anything.