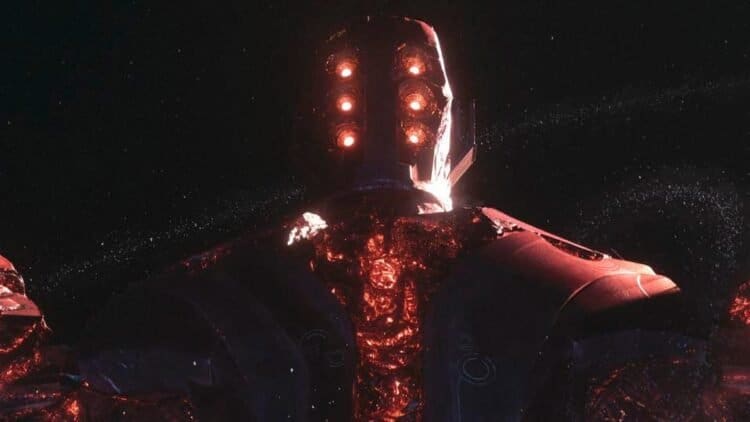 This type of subject is something that fanboys and girls are usually bound to laugh about since they’d likely think that the Celestial, Arishem, would wipe the floor with Unicron since the latter is essentially a planet-sized robot that has obvious limitations that Arishem might be able to capitalize on when it comes to a one on one combat. The unfortunate thing is that Celestials don’t tend to fight unless there’s something that they need to fight for, as their level of power is so incredibly vast that they don’t appear to need to even move through time and space, as they teleport from one location to another without needing to expend the kind of energy that would come from getting into a brawl that might easily destroy or at least damage nearby worlds with the force of the energy they’re likely to need to move. In other words, Arishem, along with many other Celestials, is powerful enough that he might be able to fold Unicron in on himself. It’s essentially putting a machine that can cruise the cosmos against a being that can control a part of the cosmos.

But keeping in mind that Unicron is more than just a planet unto himself, there is the idea that he holds a massive amount of power and can dish out a great deal of damage on his own. While the birth of a Celestial typically destroys a world, Unicron can also destroy a world on his own, though it kind of depends on whether a person is thinking of the version from the comics or from the animated movie that came out in the 80s. This character is another bit of proof that size is and isn’t a huge issue in the Transformers world since he was destroyed by the Matrix that was held by Hot Rod, who became Rodimus Prime when he accepted the Matrix.

The fact that this device managed to destroy Unicron means that it’s essentially a powerful item that carries the kind of potential that would make it a prize for anyone. But since it can only be utilized by someone who is found to be worthy and can access the power, it is an unreliable item. Arishem has access to the kind of power that might be just as powerful, if not more so, than the Matrix, which means that the Celestial might be able to tear Unicron apart without much effort. The fight wouldn’t be that quick though, especially since it feels that Unicron wouldn’t be the type of character that would let someone attack him in this manner. Some might decide to argue that the massive Transformer, one of their gods, in fact, wasn’t able to do much about a group of Autobots seeking to damage him from the outside, or the inside, but the truth is that one has to think of how easy it isn’t to swat at flies when they’re being pests by buzzing around, or mosquitoes when they’re finding a place to land. That’s kind of the same thing when Unicron is fighting smaller opponents. But against Arishem, it feels as though Unicron’s naked aggression wouldn’t be any more effective since a Celestial is a being composed of raw power that comes from the cosmos, and when it comes to being able to destroy one another being, Arishem is the type that doesn’t necessarily strike against another being unless he’s provoked.

One has to remember that the Celestials do things with a purpose, while Unicron is absolute chaos. This might give the planet-sized Transformer a slight advantage when it comes to a fight. If he could blitz Arishem and cause enough damage it feels as though he could bring the Celestial down with the type of attack that could keep Arishem on his heels, so to speak. But that’s a big if, since it’s fair to think that with but a thought, Arishem could put Unicron on notice with a display of power that wouldn’t allow him to forget that he’d come for a fight and that he would get a fight. The conflict between these two would shatter worlds if they really started laying into each other, but in terms of damage that would cripple one or the other, it’s not easy to say who would trump who.

Arishem could win if he turned on the full force of his abilities, but it’s not hard to see that Unicron would be a problem for a while, and might even win if he let loose the power that he wields in a strategic manner. There are still a lot of factors to bring into the mix, but it does feel that either combatant would be able to win depending on their tactics and how they decided to use their abilities.