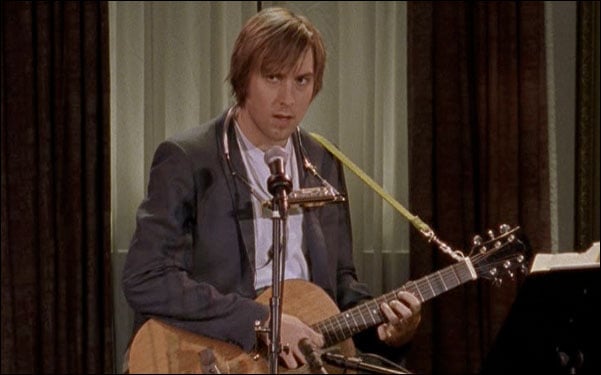 On the surface, “Parent’s Weekend” is a very haphazard episode of Undeclared. Centered around that awkward weekend during fall semester freshman year when parents come to “visit” (aka inspect what you’ve been up to), and kids try not to be hammered all 48 hours of the weekend (60 if you’re done with classes early on Friday), “Parent’s Weekend” is an episode that attempts to manage four different stories at once – and often, suffers from the isolation it places each of its characters under. In the case of Rachel and Lizzie, it’s a complete wash – but in an odd turn of events, the rest of “Parent’s Weekend” takes a long, hard look at the masculine components of a family, and the different reconciliations young males often have about themselves and their fathers, as they begin to mature into adulthood.

It’s what ultimately makes the Lizzie/Rachel story feel wildly out of place, even though all four stories are seemingly unconnected: there’s comedic value to Rachel trying to hide her pretty reasonable college life from her judgmental, paranoid mother, a character solely defined by those two traits. There’s no context given to Rachel’s high school behavior (except she was too scared to smoke a joint) and why her mother would behave the way she does; and without that, there’s no pathos to their story, simply a mean-spirited attack on a woman we don’t know, or get to have a good feel for even, during the events of “Parent’s Weekend” (and does Rachel’s father even exist? I don’t even remember seeing him, forget about hearing from him). And that leaves us with Rachel throwing Lizzie under the bus to save herself from her mother’s wrath as the entirety of the story, a one-sided affair that only paints Rachel as the immature one of the bunch (a title that should stay with Steven and Ron).

Remove their forgettable scenes from the equation, and what remains are three surprisingly strong stories about masculinity in the family – or in Ron’s case, masculinity in the extended family, when Lloyd’s sister asks him to take her virginity. Again, these three stories couldn’t seem more different on the surface: Hal trying to win back his wife is simple Steven cringe comedy; Marshall’s music career is always played for easy humor, and Undeclared also finds his father’s fake leg hilarious; and Ron freaking out is just Ron yelling, which is Ron at his best. Slowly unpack these, however, and there’s a lot more at work in these stories, which unfortunately only get 22 shared minutes to play out, and lead to some awkward non-endings.

Hal and Steven’s are really the foundation of the episode, because they explore male ideals from both generations: Hal’s behavior is a reflection on his inability to see his wife as an equal being (she tells him he didn’t love her, he yells “I always found you attractive!”; not really the same thing), which Steven views as pretty pathetic, a feeling every male wrongly (or in many cases, rightly) has about their father at some point in their life. Steven can’t accept his father’s petty behavior, unable to reconcile the fact his parents have been together longer than he’s been alive, meaning he has no insight into the quirks of their relationship – quirks that are revealed when they fool around in Steven’s room while he sits there talking to Marshall’s uncomfortable-looking mother.

We’ve already seen Hal put the pressure on Steven to be a man and deliver some good grades (while getting a job, he hopes), and we’ve also seen how Steven views his father, pushing him away in his desire to find himself away from his father’s influence – which, like any father’s, weighs heavy on a young male no matter how far away he goes to college (and in Steven’s case, is about as close as humanly possible). It’s well-established how Undeclared has carefully constructed a living, breathing relationship between father and son at the heart of the show; and like previous episodes, “Parent’s Weekend” starts getting good when it focuses on Hal’s decisions, with the impact they have on Steven more of a secondary objective. Considering Steven is the de facto window into their world as the show’s protagonist, Hal gets the most meaningful resolution of the episode – when his world-hopping ex-wife pleads with him that they raised a great son, and should just be happy with that as a result of their failed marriage.

This dynamic – and the frustrations inherited with it, as Hal tries to mold Steven into something he doesn’t want to be, while clinging to an image of his father that no longer exists, something every male faces as their father ages – is a really important component, one that plays out in microcosm with Marshall and his own father. Marshall’s father sees no value in his son becoming a musician (or anyone for that matter), and the pressure for Marshall to succeed, and his reluctance to accept his parents’ role for him, speak to the search for individuality outside the family that him and Steven both desire. With more freedom to operate on campus, Marshall has more space to express himself: the moment his mother and father step onto campus, all that changes, and Marshall begins to reflect Steven in the battle between father and son over assumed responsibility and identity, offering a glimpse into the familiar debates every high schooler has when they argue with their parents about “their” life.

As much as we try to fight it, our parents continue to shape our lives, even when we go off to college. When they are like Steven’s and get divorced, that shaping becomes uneven and jagged (thanks to the conflicting inputs from two individual parents), but it still exists. And that journey is no more true than it is for a father and his son, who face equal conficts with each other and self. There’s certainly a similar dynamic to be spoken for with mother and daughter, but “Parent’s Weekend” isn’t nearly as interested in the different nuances there, even as a comparative device: the subtely of the male plots in this episode is much more pronounced, and makes for much more interesting stories.

And then there’s Ron, who wants to sleep with Lloyd’s sister, then gets scared and doesn’t do it. He’s really a representation of all the males in this episode, and a fantastic one at that: no matter how much a person (male or female, though males are really terrible about this) speaks to a certain definition of themselves, that ideal will be skewed by perspective – and more often, simple facts of reality. Hal thinks he’s a husband, but his wife’s not in love with him. Ron wants to rock Amanda’s world, but he doesn’t actually know what he’s doing in that department. Steven thinks he is mature enough to understand his father’s pain and control it; he doesn’t know the first thing about regret, or losing something you’ve loved for longer than you can remember. Like most 18-year-old males (or those trying to live vicariously through them), their lack of perspective makes them unable to understand themselves or their fathers, which causes friction between them all. Marshall’s parents just want him to have financial security, and Hal just wants to put his family back together; however, being 18 and selfish, it’s nigh impossible to understand any of these emotional nuances at such a young age, a dissonance “Parent’s Weekend” is fully in tune with.

I only wish “Parent’s Weekend” was more in tune with everything else: all of these stories come screeching to a halt at the parent’s dinner, where Hal apologizes, Steven disappears, Ron realizes he’s an idiot (he forgets that being the best at something is pretty easy, when there’s nobody to compare you to), and Marshall’s parents either boo him or leave early (they’re yelling in the background during his “performance,” but later Lloyd says they missed the show, and they don’t seem too mad in their hotel room). To say “Parent’s Weekend” flames out quickly is an understatement, but even though its first and third acts are a complete mess, the conflicts brought to light in the second act are one of the most accurate portrayals of inter-generational dynamics between parent and child I’ve seen on any high school or college show, a major redemptive factor in a rather hodgepodge episode.

– Rachel’s mother: “I was in a twelve step program for road rage; I understand.”  Lizzie: “I don’t know what that means.”

– Ron’s paranoia at its peak: “How was your shag? Oh, I got Ronned – he Ronned me, it was terrible.”

– Marshall’s performance is great, but my favorite scene with him is when he’s practicing in the hall shower, which anyone will tell you is the loudest place on the floor. Plus, he pulls Ron into the stall and makes them talk uncomfortably close, the single funniest image of the episode. 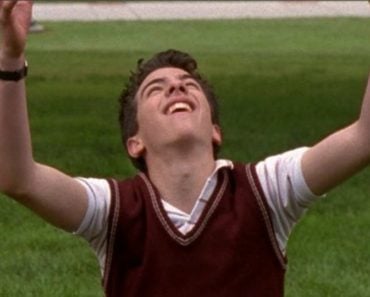 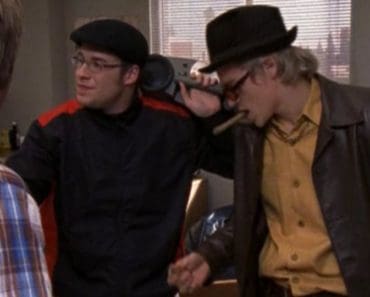 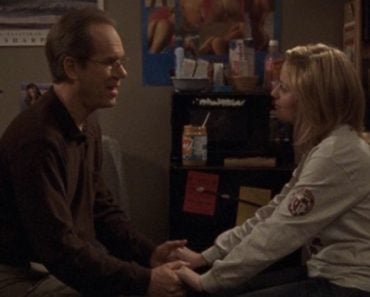 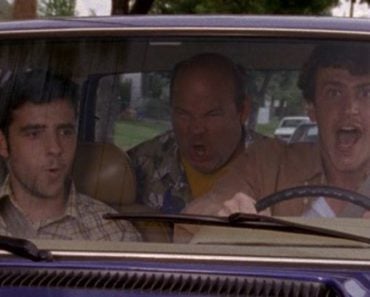 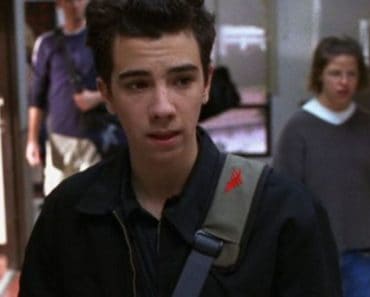 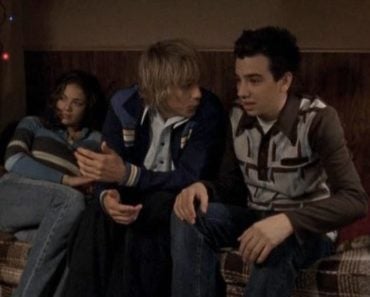