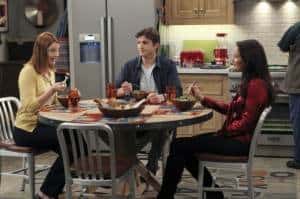 It’s been a while since we’ve had a new episode of Two and a Half Men. Did anyone else notice the hair morph in the opening jingle, replacing the many years of morphing Jake? Maybe this has been going on since Ashton’s hair cut, but it was the first time I noticed it and it stupidly made me laugh.

If you watched the April 9 episode, you know that the fourth wall was broken and Alan spoke straight into the camera to ask us to vote: whose dinner–his or Walden’s–was worse? Walden had dinner with Zoey (the girlfriend) and Bridget (the crazy ex-wife), to show Zoey that she doesn’t need to worry about him and Bridget going into business together. Alan had dinner with Lyndsey, Jake, Eldridge and most importantly, Evelyn and Jean: the two grandmothers who are now a couple.

Dinner 1: “So you’ve gone into business with the woman who drove her car into your living room because you chose me over her.”

Zoey is a bit of a saint for agreeing to attend this dinner at all. After three weeks of being away, Walden picks her up from the airport, brings her home, takes her to bed, and it’s not until after they’ve had sex that he mentions his new software business. It’s with his ex-partner Billy Stanhope and his ex-wife Bridget. The “electric suitcase” could make billions of dollars, but unfortunately Bridget had to be a third partner because she helped to build the original code. Walden tries to compare this to Zoey seeing her ex-husband all the time because of their child, Ava. The only difference is that a child costs a fortune and a business makes a fortune. For whatever reason, Zoey agrees to one dinner.

What Zoey learns during the dinner: Bridget and Walden met in high school, fell in love and spent many happy years together; Bridget is happy that Walden found someone because she thought he was too needy for anyone to put up with (okay, they agree on this); Bridget thinks it’s good that Walden and Zoey are keeping their relationship casual so nobody thinks Zoey is out for his money; Bridget thinks it’s Zoey’s responsibility to tell Walden to not wear sandals to business meetings, and if she won’t, Bridget will do it herself. Zoey clearly sees that Bridget is trying to get between them, but even when Bridget gives Walden a departing hug, Walden himself doesn’t see it. Zoey says what we would all like to say to Walden: “Oh, how can you be so smart about some things and so stupid about others?” 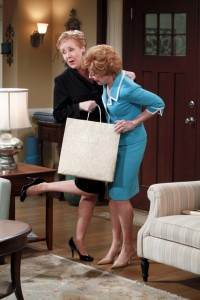 Lyndsey is finding it difficult to continue a relationship with Alan when his mother is taking sexual advantage of her mother. Alan disagrees that this is what’s happening, but it’s hard to deny when the two women return to Lyndsey’s house. Jean is in a new outfit that looks like it could have been straight out of Evelyn’s closet, and they have matching tattoos: a heart with “E+J” written in it. To top it off, they’ve decided to move in together and they’re getting rid of Jean’s condo. Out of Jean’s earshot, Evelyn says to Alan and Lyndsey, “This sort of makes you brother and sister, doesn’t it?”

Alan and Lyndsey pick up the kids to go to the dinner, and they try to explain why their grandmothers are living together. Alan says the women are lonely and are going to be roommates. The kids can see the positive in this: if one of them falls, there will be someone there to help. Eldridge asks what happens if they fall at the same time, and they proceed to discuss whose grandmother would eat the other if they were about to starve and die. At the dinner, as per the episode title, Eldridge mentions how much he loves grandma’s pie. Fortunately, the grandmothers are relatively discreet about their relationship and the boys never clue in. Alan and Lyndsey are saved from having to explain the situation, thanks to what Alan called “the upside of stupid.”

After the dinners are over, Zoey attempts to break up with Walden via video chat; she doesn’t appreciate that he might be questioning her motives or that he’ll be in business with Bridget. Bottom line: the dinner was bad. Walden makes a counter proposal and asks Zoey to move in with him. Little Ava is heard in the background, “Mommy, mommy, please say yes!” She then appears on the computer screen, “I love you Walden.” Ava is one of the cutest little girls in existence– who could say no to her? Zoey seems to tentatively agree, but she mentions that someone else has to move out if she’s moving in; Alan, driving home from dinner, suddenly gets a shiver down his spine. 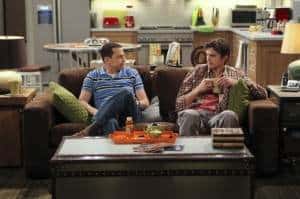 Poor Alan. Walden gave him 100 shares in the new company, but now he’s unaware that he is going to be asked to move out. He should be used to it by now. As long as there is Two and a Half Men, there will be Alan at the beach house. Won’t there? All Alan cares about right now is his 100 shares in Walden’s company, and after telling Walden to dump Zoey a couple times during this episode (whatever needs to be done to protect the new business), Alan will definitely not appreciate Zoey when he’s asked to move out. Walden verifies that Lyndsey has her own house, and the rest will have to wait until next time…

Also, there was tea drinking in this episode. A nice change from alcohol. And I still want Walden’s Ctrl Alt Del cushions.

Time to vote! Whose dinner was worse, Walden’s or Alan’s? Watch Two and a Half Men, 9/8c on CBS.