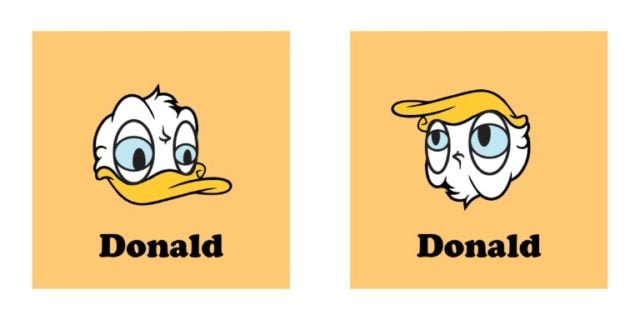 Ever since Donald Trump walked into the spotlight declaring himself to be candidate for President of the United states and eventually winning that seat, we’ve been all over the guy, and rightfully so.  Not only do we grill his policies, pathetic and childish behavior, relationship to his wife, collusion with Russians, and 7000 other things that all seem to happen each day, his appearance is always great fodder as well.

If the guy didn’t have an orange face and a set of hair that will baffle us into eternity I suppose we could let it go.  His hair has been compared to an ear of corn, Ernie McCracken’s hair from Kingpin, and just about every animal with bushy hair that exists.

But never have I before realized that Donald Trump is actually a cartoon character.   As in literally.  This wonderful and freaky GIF comes from a competition hosted by B3ta. You can see the original GIF created by the user ? and you can also follow B3ta on Facebook.  That’s right folks.  Donald Trump is Donald Duck.