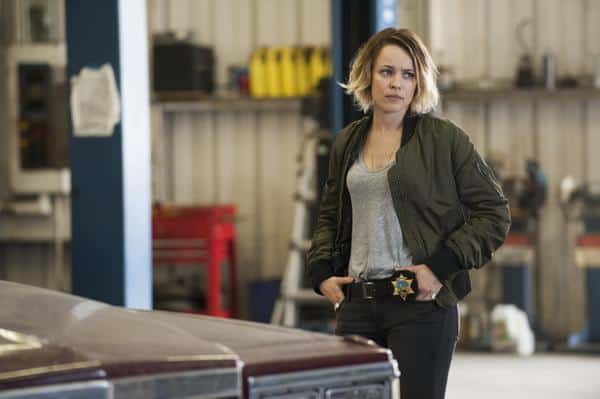 Through four episodes, Season 2 of True Detective has been nothing but growling faces, metaphors for male genitalia, and long tracking shots of freeway crossovers. There’s nothing but shadows and grimness to be spread around, something “Down Will Come” continues to shove in the audience’s face – and impressively, does so without ever losing its relentless pursuit of confusing viewers, throwing on plot detail after plot details until we’re left with no choice but to either take notes, or let the details of the plot fall to the way side, and stay for the performances and thematic work – or the chaotic, thoroughly over-the-top shootout scene, of course.

Unfortunately, that thematic work continues to operate around goofy visual metaphors: Paul wakes up after a tryst with his former squad mate, and then suddenly no longer has his motorcycle, just as Frank’s avocado trees can’t seem to grow at all. The idea behind these ideas might be a little more welcomed, however, if True Detective wasn’t recycling observations about masculinity, and adhering to a familiar structure for revealing thematic material; introduce it in a subtle way, then hammer away at it until people are able to understand it fully. This approach, however, doesn’t leave much room for nuanced depictions of humanity – instead, we get Ani being suspended for sexual misconduct (the professional equivalent of being yelled at for vaping), Paul shedding a single tear in a cab, and Frank talking about how he couldn’t father an adopted child, because it wasn’t sprung from his own DNA.

Maybe we should welcome this unwavering approach: when it comes to story, True Detective is losing itself in its own details. It seems the only thing any Californian politician or cop cares about are land deals and sex orgies, which haven’t exactly painted its antagonists in any sort of human fashion, or even one that establishes them as something beyond the scarecrow in the cornfield of our character’s own individual sorrows. It’s here where “Down Will Come” – and this second season as a whole – begins to fall apart for me; look a bit closer, and it becomes clear how close to season one patterns this show is following.

Push aside the existential leanings of early season one episodes; beginning with the shady, undefined governmental power structures, True Detective is telling the same story in a different form. There’s a big shootout at the end of the fourth episode, which will neatly delineate the story from the “traditional cop case” the first three episodes purported; this is when our characters will begin going “off the books” as cops, marked by Ani’s quote about how she’s not going to wait for back up to take out some guy whose fingerprints were on Caspere’s watch, therefore immediately establishing him as a definitive suspect for the case (once a suit next to Ani says “This is our man”, we can all definitively say that no, he is not our guy). There’s the guy with weird sexual preferences at the heart of the story (remember last season’s incestuous finale?), and the overwhelming feeling that the head of a ‘religious organization’ is actually into some heinous, probably sex culty things (Ani’s father = the head of the religious ‘school’ from season one)… everything about “Down Will Come” feels familiar to the first season of the show, both in how stories are delivered, and where it appears they are heading.

I suppose that makes a bit of the observation conjecture; yet there’s no sign otherwise in “Down Will Come” of new, interesting paths to take and storytelling devices to use. Hell, the show’s even fallen into its own patterns, continuously returning to the same run-down salon with the same run-down singer, or shamelessly repeating the patterns of Paul’s internal conflicts. Formulaic it may not be, but repetitive it certainly is: and it constantly threatens to turn True Detective into a parody of itself, as it takes such a hard headed and frankly, one dimensional approach to using thematic parallels and conveying story (not to mention the collection of actors struggling to deliver his dialogue with the kind of panache it so desperately needs). Even having a credited co-writer for the first time can’t help “Down Will Come”; once again, True Detective‘s second season refuses to branch out and challenge itself, making for a disappointing hour of television with a particularly loud ending.

– One thing I did enjoy: how director Jeremy Podeswa is able to convey the complicated spaces of the shootout to the audience. In particular, the long, low-angle shots of Paul and Velcoro flanking the side of the bus are terrific.

– Frank’s job pitch to Velcoro is this week’s laughably overwrought moment: “Sometimes, your worst self is your best self.”

– Maybe we’ll find out who W. Earl Brown was taking pictures for this season – or maybe not, and the secret dies with the brain matter he leaves on the sidewalk.

– Ani’s father tells Velcoro he has a huge, jet black aura; Velcoro’s reaction is the single best shot of the episode.

– There is mention by a reporter that Paul has a history of abuse with women, because of course.

– SO MANY BULLETS BEING FIRED.

– What was with the weird freeze frame to close the episode?

– Frank, being intimidating again: “I never even had a f***ing cavity.”