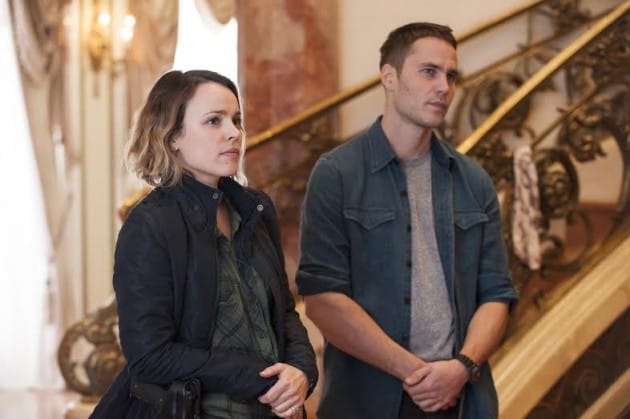 Strip away the ever-growing collection of obscure case details of True Detective, and what you’ve got is an extremely unsubtle series of stories about emasculation – including one of a woman forced to be a man because of a loser, hippie father, and all the guys in the world too wimpy to experiment in the bedroom. There’s the story of the drunk cop trying to regain control, the pinnacle of masculinity fighting with his sexuality, and the king coming to the end of his reign; True Detective has made no qualms about making its priorities for the season quite clear, to the point numerous scenes and moments have felt like parody (right down to the laughably moribund theme song opening each episode this season).

This hammer-headed approach to characterization and narrative continue with “Maybe Tomorrow,” often laughably in places; it begins by detailing Frank’s newfound impotency problem, and continues through the episode, circling around this theme of masks, of the disguises characters place on their lives to ignore difficult truths. Most of these masks, however, take one of two forms: sexual or emotional dysfunction, neither of which “Maybe Tomorrow” lays out with any sort of nuance. Forget the fertility clinic scene; one scene with Bezziredes and Woodrugh in the same car is enough to realize how wickedly simplistic these stories are. How many scenes do we need of Woodrugh longingly gazing at a man, followed by cutaways of him furrowing his eyebrows or acting homophobic? Some mistake this for “nuance” due to its visual delivery; but just because these ridiculously one-dimensional views aren’t being verbally expressed, doesn’t mean they’re not present.

Maybe this season of True Detective is an examination of how completely incapable males are in understanding the concept of empathy or emotional nuance, be it Bezziredes (who breaks up and physically threatens her ‘boyfriend’ in front of her colleagues), Velcoro (“I pissed myself”), or Frank, who is living out a more stylized version of Stringer Bell’s story, right down to the petty details about land deals and the attempts to leave the dirtier street life behind (Frank is apparently a former boxer, though, so who is going to try and stop him?). But even at that, True Detective fails to add anything interesting to the examination, more reinforcing simplistic ideals than offering nuanced portrayals of complicated inner dialogues; we’re treated to a series of brash, darkened images instead, while men in masks poke around at the investigation.

The investigation itself is already proving itself to be the least interesting aspect: Caspere was into crooked deals and hookers, and clearly got in over his head. The more convoluted “Maybe Tomorrow” tries to make the proceedings with prostitute names, new “details,” and other interests possibly acting in accordance to commit the crime, the more oblique and boring True Detective gets. The only time the show tries to engage us with these (mostly unseen) groups of characters, it feels like extraneous details shoved into the side pockets of character exploration – exploration itself that feels superficial, and lacking in any kind of unique detail or individual story.

Perhaps it is the performances; beyond Kitsch’s frustrated stares lies Frank’s blank eyes, which Vince Vaughn continues to struggle conveying as humanized in any sort of way. To his credit, it’s pretty hard to, when the first image of the episode is designed to parallel another (Paul getting a beej in the premiere), despite those two stories taking on completely dramatic tambors when in their own individual scenes. Admittedly, both feature lengthy close-up shots obsessed with the longing glances of men wishing for a world of traditional male values and domination, struggles that themselves interrupt and confuse a police procedural about a sex/drug/real estate ring gone wrong. In short, it seems True Detective is flailing to find true purpose, unable to accelerate beyond its endlessly superficial views of male (or female) masculinity with lines like “he’s half anaconda, half great white” – or Bezziredes again being insulted for her attempts to smoke an e-cigarette, which True Detective pretty openly equates with her lack of having a real penis, Bezziredes’ e-cig (and ‘masculine’ attitude) a metaphorical dildo that can only approximate the experience of being (or having) a “real” man, the kind of guy who keeps his emotional issues quiet and drinks them away, knowing all the while how toxic he is as a human being (and struggling to enjoy oral sex as a consequence, apparently the ultimate dramatic signifier of one’s masculinity).

Thus is the misery of True Detective; no matter how many Lynch-ian dream sequences these final five episodes try to offer up, it seems it won’t be able to un-bog itself from the laughably one-note characters and ridiculously overt stories they’re enacting. Three hours in, and True Detective seems mired in its own ridiculousness, a show that has mistaken plot complications for intrigue, and laughably trite, predictable stand-ins for gender values as an deep exploration into the dark depths of masculinity. “Maybe Tomrrow” is more of the same, the title the only suggestion the show offers that there is a bright future for the sophomore season of this fallen show.

– It’s pretty hard to convey a “complex” investigation, when there are characters on both sides of the law openly doing whatever the hell they want. It’s as if every ancillary character has their agenda written in neon letters above their head; if I hear another prosecutor force the detectives to explore “the hooker angle” again, I’m going to scream. Could they be any more obvious?

– Velcoro lives (duh), the victim of being shot by riot shells, left to pee his pants and limp around a lot this episode.

– Speaking of Velcoro’s limp, it’s odd this is the first time we see Bezziredes in action, as if she wouldn’t be able to be the focus of the scene if Velcoro wasn’t so obviously injured.

– Ray’s dad gives wonderful insight to how Ray grew up: “You drink straight from the bottle, you’ve got a problem.”

– To hammer the point down further that Paul is gay, he meets his former military colleague (and lover?) at a rodeo, because you know, how ironic. He also stands below a billboard for American Sniper at one point.

– Frank’s feelings are visibly hurt when his employee turns up dead in similar fashion to Caspere, as if he’s never worked in a dirty business or seen a piece of media where somebody’s friend takes the hit for their actions. “How could this happen?” Frank wonders, before gathering all his former employees and proceeding to beat one of them up, going home with his gold teeth in his pocket.

– W. Earl Brown is not just a drunk, but a shady guy who follows around Paul as he struggles to converse with a gay prostitute about Caspere’s night life. Details to follow…