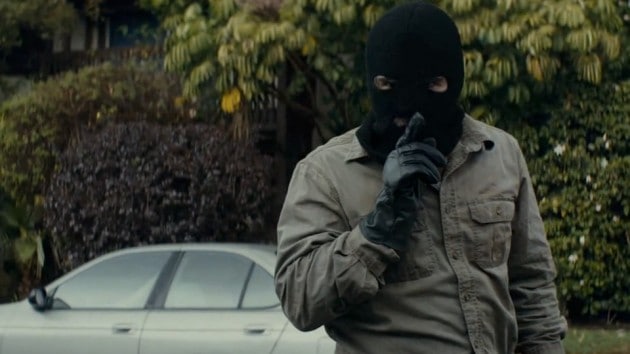 The first four hours of True Detective‘s first season were something special, a southern murder mystery wrapped with a thick layer of existentialism, delivered through the measured drawl of Rust Cohle, a man with a lot of issues, ideas, and visions. It didn’t feel like the trite story of a religious, incestuous sadist being chased by two alcohol-abusing adulterers; ultimately, True Detective disappointed, but not before taking our collective breaths away with psychadelic and symbolic explorations of the soul, and the give and pull between good and evil. Where the show began was not where it finished; which made the proposition of a second season a major question mark? Would Nic Pizzolatto be able to recover his creativity with another all-star cast, in a new location? “The Western Book of the Dead” appears to provide us with an answer – unfortunately, it’s not a good one.

The first hour of True Detective in 2015 feels much like the last two or three from 2014; there’s a lot of angst and darkness surrounding our main characters, which include Paul (Kitsch), a traumatized cop/former soldier who may have soliticed a handy from a rich girl he pulled over; Ray Velcoro (Farrell), a drug-addicted detective in the pockets of Frank Semyon (Vince Vaughn), who is trying to go “legit” with his wife Jordan (Kelly Reilly) leading the way; and then Rachel McAdams’ Ani Bezzerides, whose first two scenes on the show consist of 1) her emasculating some dude in the bedroom over an unspoken sex act he’s unwilling to initially perform, and 2) her breaking up a web cam studio and finding her ‘loose-moraled’ sister there, then yelling at her for being a slut and starring in porn.

Forget about McAdams’ mess of a character (which isn’t helped by the performance behind it, which is a little too intense for its own good): at one point, a lounge singer croons loudly, singing “This is my least favorite life” over and over, the camera shoved close to her face, providing a weird counterpart to images of Velcoro doing cocaine and drinking heavily, while Frank Semyon watches on with a sad, fatherly look. That particular image (which takes places near the end of the episode) sums up the entirety of this first hour: while it can drape itself in the same darkness as season one, it has no setting, story, or performer that seems entirely capable of embodying it – really, the first hour just circles around the depressive personalities of its main cast, pausing occasionally to remind us that there’s something interweaving their lives together, like the many shots of highways criss-crossing over each other, some murder story that involves a high speed rail and a dead city manager.

This objective is secondary to Pizzolatto’s script, however: the primary focus of “The Western Book of the Dead” is characters staring at themselves in mirrors, contemplating silently just how far they’ve all fallen and can barely recognize themselves in the mirror. It does so by showing them exhibiting the classic behaviors of a disturbed police officer: Velcoro drinks and gets high constantly (or beats up the fathers of punk kids at his son’s school; of course, he’s the single father trying to connect with his kid, who has a new family), while Bezziredes has an abnormal sex life (and sex-obsessed family, because why have subtlety?), and Paul Woodrugh suffers from PTSD from being a soldier, who may or may not also have a problem with sex (there are hints of it in his scene with his girlfriend, though this could just be from all the horrible things war has done to him).

“The Western Book of the Dead” feels like a check list of things that made the first season ‘cool’, without any of the stuff that made it feel intelligent – and more importantly, wholly unique. Pizzolatto’s creativity, his ability to write haunting dialogue is gone here; to call the hour ‘straightforward’ would be an understatement, each character stuck in two dimensions, with a script that refuses to introduce a third. There’s lots of staring, lots of unhappy faces bathed in shadows – and occasionally, some phrase related to the actual case, which seems secondary to telling the story of how depressed people ruin their own lives, which turned out to be the second-least rewarding arc in the show’s first season (the least being the actual murder mystery, which completely flat lined in its climatic moments). It’s all very dour, without any sense of why it’s so dour, except that there’s a conspiracy afoot and we have a cast of seemingly ill-equipped protagonists trying to sniff it out.

Is this really what True Detective wanted to be all along? A vapid, pretentious excercise in dramatic futility? There’s still seven episodes to watch, of course, but the priorities of this first episode line up a little too neatly with the last half of season one to instill any sort of confidence in the viewer. Maybe as the show jumps back and forth with time (there’s one “interview” scene early on, though it seems TD drops this like a hot, rotten potato after the first instance), Velcoro’s drugging and Woodrugh’s staring into the abyss will gain some meaningful context, and they’ll become relatable characters. Right now, they’re all just a series of “emotionally damaged” character cliches, with an equally weightless “weird government conspiracy” story thrown on top.

The problem is not that this can’t be fixed almost immediately, it’s that with only eight more episodes in the season, there’s almost no time for it to go through a growing period. The first season’s growing period turned out to be its undoing, the show devolving into a litter of serial killer tropes while completely abandoning its larger philosophic musings, robbing the show of its truly singular quality. There’s nothing singular about “The Western Book of the Dead” – and ultimately, it’s that lack of ambition that defines this unsatisfying first hour, setting a poor stage for whatever story is to follow.

– Frank: “Never do anything out of hunger, even eating.” It’s these kind of vapid, declarative statements that make this first hour so stilted and melodramatic. That piece of advice makes no sense.

– Why is Velcoro in Frank’s pocket? Well, Frank found the man who raped Ray’s wife (and may or may not have impregnated her) and gave Ray the information, thus putting him in Frank’s debt for eight years running.

– Frank is like Rust Cohle without the life that defines him: he’s divorced, emotionally stunted, and drinks too much. Unfortunately, there’s no sense that Velcoro is anywhere near as intelligent; he simply embodies the simple, retrograde masculinity that defined Marty Hart in the first season, without any of the underlying contradictions. It makes him an infinitely less entertaining character to watch, one that’s hard to empathize with after he beats a father in front of a child (the second person he beats the crap out of in the episode, I might add), then drinks himself to sleep in a restaurant. Classy guy.

– It seems Jordan Semyon is the reason Frank was able to go from thug in leather jacket to legit businessman in eight years? If only she had dated Stringer Bell instead.

– David Morse as Bezziredes self-serving hippie father is the most ridiculous – and welcome – touch of this dour premiere.

– the missing (and later dead) city manager has an apartment full of sex toys, naked art, and more sex-related stuff. To say this episode “lays it on thick” is a severe understatement.

– Why does life suck for Velcoro? “I wanted to be an astronaut, but astronauts don’t even go to the moon anymore”, he tells his son over a voice recording, while smoking a joint and waiting to beat up a journalist. Sigh.

– “We don’t belong in this.” Are you warning us, or talking about yourself? Your choice.