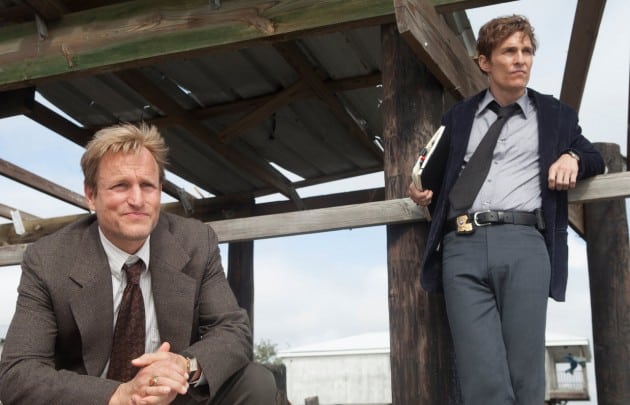 There’s been plenty of allusion as to what happened between Rust and Marty in 2002 that fractured their partnership in the first five episodes of True Detective, which raises a simple question about the events that unfold in “Haunted Houses”: did we really need to spend the entire hour on it? Sure, there are some vague hints towards the larger conspiracy Rust’s been chasing for the last ten years, but the overwhelming majority of “Haunted Houses” focuses on the death of Marty’s marriage, and does so in predictable fashion.

“Haunted Houses” certainly attempts to build up to the climatic scene between Rust and Maggie, but the pieces never come together to form any kind of interesting, complex narrative: Maggie got mad at Marty for cheating again, and turned to Rust for answers and vengeance. There’s certainly the framework for them to come together; Rust is pissed off at his partner for not having his back (giving him the middle finger on the way out of the office after being suspended for looking into old missing persons cases), and Maggie is seeking revenge, but due to being married for seventeen years, can only do so with a man she trusts. And it certainly doesn’t work as ‘shocking’ moment; given their exchanges in 1995 and her continuous attempts to help Rust find a woman, the foundation for her attraction to him was always obvious.

So we’ve got an unhappy wife and a man who can’t resist temptation: there’s really nothing intriguing about what happens between Rust, Marty, and Maggie, although their brutal parking lot fight was a visceral exclamation point to the story. If there’s anything interesting to glean, it’s in the inferences the episode allows us to make with Rust’s sudden disappearance: he was not only frustrated and skeptical of the police force shutting him down, but extremely ashamed of his moment of weakness with Maggie, suggested with the simple image of Rust’s broken tail light (from Marty’s head) still remaining on his pick up truck when he stops to talk to Hart in 2012. No matter how he feels about Marty, Rust carries the weight of his decisions around with him forever – as Maggie points out, he’s a man of responsibility, and also a man who doesn’t believe in forgiveness.

The few minutes “Haunted Houses” pulls away from Marty’s latest fling and Maggie’s subsequent reactions, there are again hints to a larger conspiracy happening in Louisiana. Cohle’s latest theory revolves around Billy Lee Tuttle’s program that funded the many private religious schools in the area from the 1980s until 1992, when the costs became too much to sustain (Tuttle’s words). There isn’t a ton of hard evidence to be pulled from their conversation, but the showdown between Cohle and his latest suspect certainly suggests there’s something to the school on Paradise Island, which was closed by Tuttle and his foundation after they were found “messing with the students” in 1988 (something Cohle finds out from Austin, the former revival priest turned alcoholic, kicked out of the church as part of a cover-up, after finding pictures of naked boys in a minister’s library).

Again, nothing too unpredictable to see here: we’ve expected the murder investigation to get larger as the weeks continue, thanks to Cohle’s clear distrust of the police department and the information he’s given in each episode. Outside of McConaughey’s terrific performance, “Haunted Houses” doesn’t bring a whole lot to the table, resting after the existentially-heavy episodes of the past couple weeks. It’s content to rest on its laurels watching things burn, whether it’s Rust’s career, Marty’s marriage, or Maggie’s sense of self-respect – and without the ominous, darker undertones of the previous five episodes, sticks out like a sore thumb as the show’s simplest, least intellectually engaging hour of the first six.

– glad we didn’t spend a whole lot of time on the Charmaine case – watching Rust in that interrogation room hit a new depressing low for True Detective. “If you get the opportunity, you should kill yourself.”

– Marty leers at the devil figurine on Beth’s dresser – the camera is more interested in Lili Simmons naked, though.

– Tuttle: “It’s hard to trust a man who can’t trust himself with a beer.”