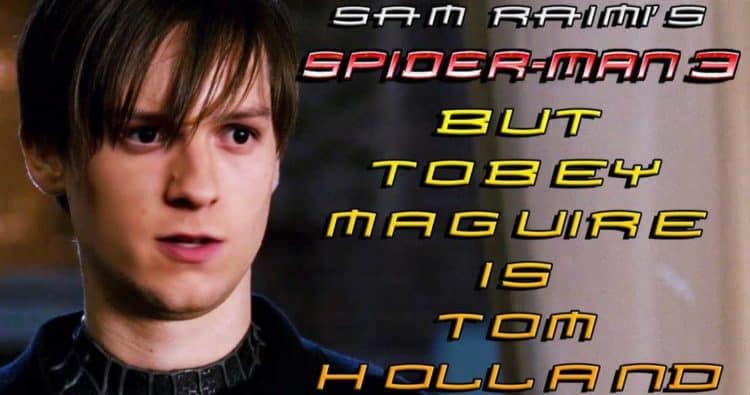 Turnabout is fair play right? Deepfake has already placed Tobey Maguire’s face on Tom Holland, and now for the emo version of Spider-Man 3 we get to see what it might look like if Holland was put in Maguire’s spot. Unfortunately the face doesn’t fit quite as well as Maguire’s did with Holland in a lot of ways as it would almost seem that Peter has a very huge swelling problem. Plus, and this might not be as fully accepted by some fans, Holland doesn’t seem as capable of acting like a jerk as Maguire does. Of course even with Maguire this part of his personality seems as though it was kind of forced since honestly both men seem like they’re better off playing decent people. That being said though Maguire definitely seems as though he could pull this off just a little better than Holland, but not by much.

As Wong Jun Heng of Geek Crusade might agree with, there’s been a huge debate since Maguire took off the suit and since Holland put it on just who was the better Spider-Man, and to be perfectly honest each individual that’s put on the suit has done a pretty good job from Maguire to Andrew Garfield to Holland. They’ve each had their strengths and they’ve each been able to bring the character to life in their own way, but there have been some missteps as well that fans have picked apart and that many people feel are either unforgivable or are possible to slip under the rug and continue. Let’s be honest here, no single Spider-Man movie has gotten it perfect yet since each director has their own vision of how things need to be and has decided to mess with the source material as needed or as desired. By asking the fans who his first real villain was you might get the answer that the man that killed his uncle was the first villain, but then you’d be directed to Spider-Man 3 when the man that would become the Sandman accidentally killed Uncle Ben. But for the first super-villain you might be directed to the Chameleon, who was a serious threat due to his ability to become just about anyone thanks to his ability to disguise himself. That could have been worked into a serious villain had the producers deemed it worthwhile.

But the Green Goblin, one of Spider-Man’s most dangerous and spiteful, as well as crazy, enemies is another that people count as his first and was the longest running in the Sam Raimi movies since the mantle passed from father to son, as did the madness. Despite the many enemies that Spider-Man has had over the years, and some of them have been so powerful that they make the Green Goblin pale in comparison, Harry and Norman Osborne still stand out as two of the deadliest enemies that Spider-Man has ever had to face. While Maguire got to face Doctor Octopus, both Green Goblin’s, Sandman, and a very pathetic version of Venom, Garfield got to take on the Lizard, another Green Goblin of his own, and Electro. Unfortunately for Garfield’s Spider-Man he also had to deal with the death of Gwen Stacey, whereas Maguire’s version at least got to hook up with Mary Jane. So far in the Spider-Man movies Holland has perhaps had the easiest time of it in terms of the number of personal villains he’s had to face since he’s only taken on the Vulture and Mysterio and his illusions, but one can hardly say that either fight was easy. Plus, Holland’s version got the chance to take on heroes as well as villains since was a part of Civil War as well the Infinity saga. At this point comparing all three men as far as their accomplishments go is kind of unfair since Sony really hamstrung Maguire and Garfield, where the MCU allowed Holland a lot of freedom and a lot more impressive story arc.

Again, fans are likely to argue if they read this and possibly even fall back on comic stats that might back their words up, which is fine since when it all comes down to it the most powerful people in the comic industry aren’t the heroes, they’re the writers, and as you can see from some of the concepts that have come across the way throughout the years some of them have gotten a tad bit lazy in their duties, as success, like always, tends to strip away the edge that initially makes something great. Regardless of who was the better Spider-Man, it’s been obvious that the character needed someone like Holland to come in and finally give some youthful exuberance that had been lacking in the other movies and also give the character an overhaul that peopled have seemed to enjoy thus far. Deepfake is getting better and better with each video as even J.M. Porup of CSO could agree with, but in this one the mashup was a bit disturbing, not to mention way beyond Holland’s character and kind of hard to accept.