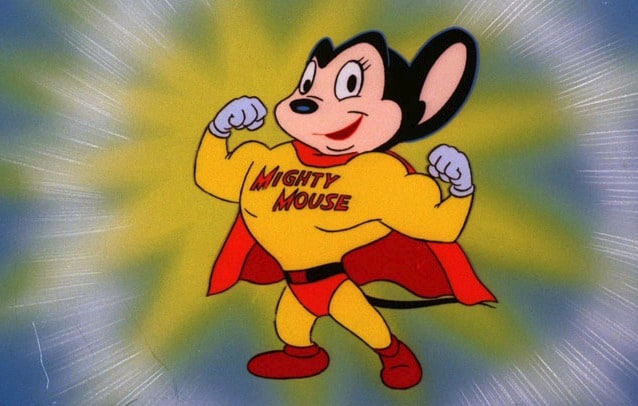 Mighty Mouse is an anthropomorphic animated superhero mouse character that was created for 20th Century Fox by the Terrytoons studio. He was originally called Super Mouse when he appeared on television for the first time in 1942. Between then and 1961, this character appeared in 80 theatrical films. He was also the star of a television series on CBS television network from 1955 to 1967.

The character has reappeared on television several times. The first time was when Filmation Studios revived Mighty Mouse in 1979. The second time was by Ralph Bakshi in 1987. Bakshi was an animation director who had previously worked for Terrytoons studio, the original creators of the character. This is where the story of Might Mouse gets interesting.

‘Might Mouse: The New Adventures’ was aired on CBS from 1987 to 1989. It was a revival of the cartoon character and CBS had bought the rights from Ralph Bakshi. According to Bakshi, he had set up a meeting with the head of CBS’s Saturday morning block, Judy Price, to pitch his ideas. The meeting between Price and Bakshi took place in April 1987.

The animation director had prepared several pitches which he presented to Price, but she rejected them all. She then asked him if he had anything else. For some reason, he said that he had the right to Mighty Mouse. Price liked the idea and agreed to buy the series.Bakshi now admits that he genuinely had no idea who owned the rights to the series, he only knew that he didn’t.

The bizarreness of this story does not end there, though. Bakshi decided to research who did own the rights to the Might Mouse series and he was surprised by what he found. In 1955, CBS had purchased the rights to the entire Terrytoon library, including Mighty Mouse. That meant that CBS already owned Mighty Mouse but had completely forgotten about their acquisition.

As described by Bakshi, this meant that he had sold CBS the rights to a show that they already owned and that they had basically given him the rights for nothing. Despite this confusion, Bakshi Productions were given the responsibility of the series.

John Kricfalusi wrote outlines for the initial 13 episodes and hired a team of animators from other studios to work on ‘Might Mouse: The New Adventures’. Those hired were split into four teams and each was given a handful of episodes on which they would focus. This was necessary as there were time constraints on finishing the series.

CBS was pleased with the results achieved by Bakshi Productions and felt that they had addressed the network’s notes well. Sadly, Kricfalusi decided not to work on the second season of ‘Might Mouse: The New Adventures’. Instead, he worked on ‘The New Adventures of Beany and Cecil’ for ABC and he took some of the team who had worked on Mighty Mouse with him. His replacement for the supervision of the second season was Kent Butterworth. In total, 19 episodes of this animation were aired on CBS and the reruns were briefly shown on Fox Kids in 1992.